TUNE IN FOR LOCASH 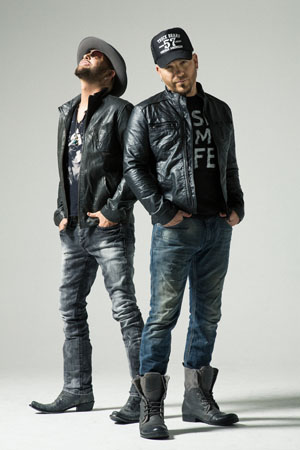 TUNE IN: LOCASH TO APPEAR ON NBC’S TODAY SHOW ON FEB. 24 AND DEBUT NEW SINGLE “I KNOW SOMEBODY,” ON FOX & FRIENDS FEB. 25

NEW YORK, NY (February 23, 2016) – The time has come for Reviver Records recording duo LOCASH. They will make their national morning show debut on NBC’s Today Show Wednesday, Feb. 24 to perform their smash hit single, “I Love This Life,” which rose all the way to No. 2 on the Billboard Country Airplay Chart. Moreover, on Thursday, Feb. 25 they are slated to debut their brand new single “I Know Somebody” on FOX & Friends. As previously announced, they will make their late-night television debut on ABC’s Jimmy Kimmel Live! Wednesday, March 16.

Currently in New York City for the jam-packed media blitz, Chris
Lucas and Preston Brust of the duo couldn’t be happier to be
experiencing so much success.

“Hard work is really starting to pay off for us,” said Lucas. “It’s
an amazing feeling for sure. We’re just so blessed and grateful for
everything that’s going on right now with our career, and our team who
has gotten us where we are. I think if you talked to Preston [Brust] or
me, either one of us would definitely say… ‘I Love This Life.’”

The upbeat, feel-good vibe of “I Love This Life,” is followed by
poignant storytelling in the new single, “I Know Somebody,” which
impacted country radio this week.

Written by Ross Copperman, Jeremy Stover and Rhett Akins, “I Know
Somebody,” has proven its potential to be a hit through positive fan
reaction on the road, and is a salute to all of those who have helped
Chris and Preston along the way.

About LOCASH
REVIVER RECORDS’ country music duo LOCASH is made up of Baltimore,
Maryland native Chris Lucas and Indianapolis, Indiana’s Preston Brust,
and in 2016, the duo has proven to be unstoppable. Their upbeat,
contagious single “I Love This Life” climbed all the way to No. 2 on the
Country Billboard radio chart, and they are celebrating the
release of their new single called, “I Know Somebody.” Formerly as the
LoCash Cowboys, the duo enjoyed hits with songs such as “Keep In Mind”
and “The Best Seat In The House,” and wrote such hits as the
chart-topping “You Gonna Fly” for Keith Urban and “Truck Yeah” for Tim
McGraw. With a new name, new look, and new record deal with Reviver
Records, LOCASH continues to build their brand through live
performances– performing over 150 dates per year — with appearances on
some of the most prestigious stages in the world with acts ranging from
Tim McGraw, Hank Williams, Jr., Florida Georgia Line, Miranda Lambert to
KISS. Their music has received over ten million views on YouTube, and
they are known as one of the hardest working acts in the music business
today. Their current E.P. I Love This Life is now available in stores nationwide.