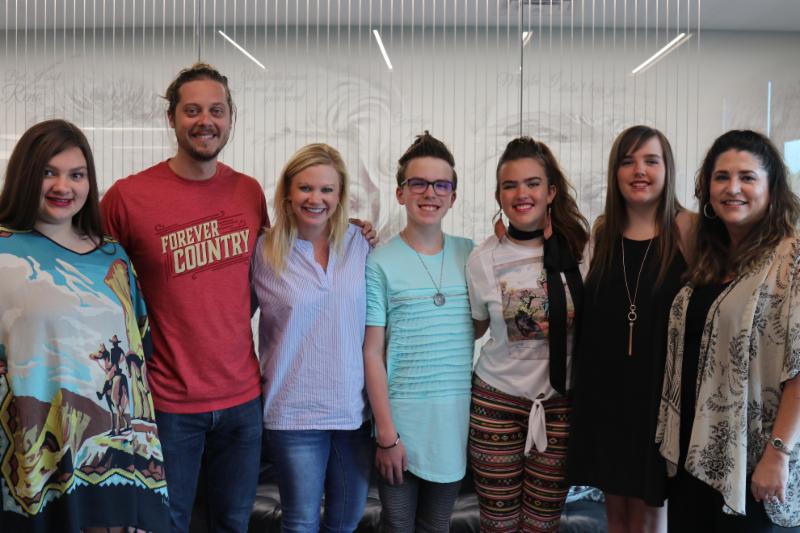 Continuing to make a splash on the country music scene with their latest single, Water, sibling group TRHibe wrapped
up a successful CMA Music Festival week last month. Not only did they
meet new fans and perform at various venues in Nashville, they also took
some time out of their schedule to visit theCountry Music Association(CMA) office and are now officially recognized as the newest members of CMA.

“We
are so thankful to be a member of CMA,” says lead vocalist Isabella
Keen. TRHibe member Gabby Keen chimed in and said, “We love everything
about country music and honored to be a part of this community alongside
so many other talented and legendary artists.”

Formerly called The Runaway Hamsters, the TRHibe is getting great success with Water.Their
visual lyric video of this song made its exclusive premiere on the
elite, high-end western attire website of Double D Ranch. This song,
which was written by the TRHibe and Steven Keen, was produced by
long-time Grammy-nominated Kent Wells (Dolly Parton) and is available on
all major digital retailers including Spotify and Amazon Music.  Their last two music videos received major video placement in PARADEmagazine as well as being aired on Music Choice(digital cable television channel or via mobile app) and in 200+ Rooms To Gostores across the U.S.

During
their trip to Nashville, they also visited the Seacrest Studios where
they performed a few songs and participated in a Q&A on-air
interview for the Monroe Carell Jr. Children’s Hospital at Vanderbilt.
Immediately after landing back home in Idaho, they packed their bags and
flew to Los Angeles to perform at the Walk And Play L.A. event which
benefited the Children’s Hospital Los Angeles.

About TRHibe: This
young group of siblings consists of Isabella and triplets Abby, Gabby
and brother Riley. Combining their musical talent and huge hearts, the
music they release is inspirational, engaging and heartfelt. Their
musical journey has taken them across the country performing at various
venues including the historic LA Coliseum, the famous Bluebird Café,
opening for Billboard artist Andy Grammer, participating in CMA Music
Festival for the past few years, appearing on numerous TV and radio
networks including WSM-AM (home of the Grand Ole Opry), taking part in
The National Finals Rodeo Cowboy Christmas in Las Vegas, and more.

About CMA: CMA
was founded in 1958 and “was the first trade association formed to
promote a genre of music. The organization started with 160 members and
has now grown to more than 7,500 industry professionals around the
world representing every aspect of the business. CMA is dedicated to
bringing the poetry and emotion of country music to the world.” www.cmaworld.com