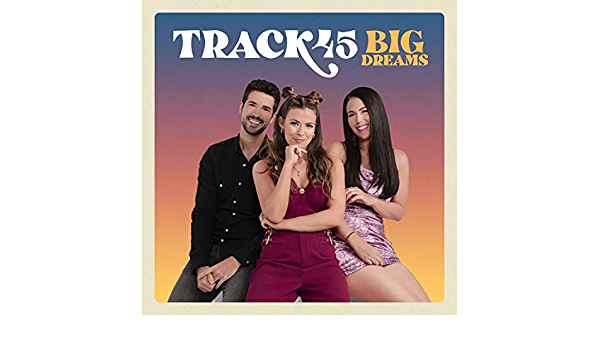 Track 45 hails from Meridian Mississippi and the trio are siblings who ran off to Nashville to chase the dream, and I think they must be pinching themselves to see if they are dreaming, as they are landing some heavy weight song placements with the likes of artists such as Justin Timberlake, Lee Brice and more, putting them firmly into current chart makers in Nashville, their new home.

The trio released the album, “Big Dreams” this spring and it’s got a great collection of tunes that are worthy of a listen for folks who are fans of pop country with a big sound.  Produced by Grammy award winner Byron Gallimore, his touch is heavy upon this young trio, having produced numerous hits for Tim McGraw & Faith Hill, it’s a style that is very apparent on this release, so, let’s dive into the five tracks on this release.

First off the big production on the feature track on their website is “Met Me Now”, The song builds up in a Taylor Swift styled opening.  When I first heard it I was trying to play the accent, the song builds up, and a very Paul Hiem drum sound, and the song jumps out with harmonies from the trio.   I waiting on a guitar solo (which didn’t come) but the song  made up for it with the vocal gymnastics that this group, especially the youngest sibling, KK.  The song abruptly ends, I was waiting on that early Martina McBridge style outro.  Still a great song.

The song has a bite to it, and a push forward to the feel.  Sort of like an angry Little Big Town,

With a hard half time feel to it.  Guitars and Keyboards drive each other toward the chorus

With the repeating of the chorus line “ Little Bit More”.

to the attitude and feel to the song.  Not that it’s a bad thing, she’s huge success, so not a terrible role model.

I like this song, and KK again has such control over her voice.  No doubt about it, this trio has beautiful, but the use of auto-tune as an effect distracts from the overall song.   If they stripped all the production off the song, they’d come away with some beautiful lifting melody.

Light of a Clear Blue Morning

Track 45 really hits a home run with this cover of a Dolly Parton song here.  This cover really manages to meld a traditional country song, complete with fiddle and pedal steel. When the tempo picks up, it’s a great rendition, worthy of repeated listenings.