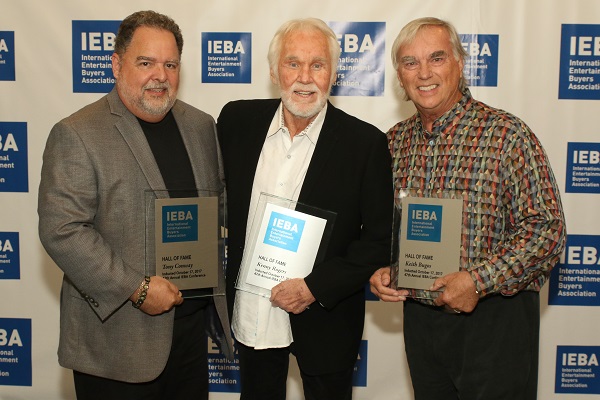 NASHVILLE, Tenn.
– Over the course of his career, Tony Conway has worked with some of
the biggest legends in the music business – helping to build careers
that have taken artists to the top of the charts and beyond. On Tuesday,
October 17, the legendary executive was honored for his career
achievements by being inducted into the IEBA (International
Entertainment Buyers Association) Hall of Fame last night as part of the
organization’s 47th Annual Conference in Nashville.

“It is by far the highest honor I have received in my four-plus
decades in Nashville. I am truly honored and very humbled to be in the
company of so many of my heroes, teachers and mentors,” Conway said of
the honor, which he shared with Kenny Rogers. “To be inducted at the
same time along with Kenny Rogers a true legend in the business is
incredible. I never had the pleasure of representing Kenny, but I sure
did have a lot of my clients on tour with him through the years, and for
that I cannot thank him enough. Going into the IEBA Hall of Fame means
so much to me personally because I’m now alongside so many of my heroes
and mentors.”

In his speech, Conway made note of longtime associate Joan Saltel,
who he credited for teaching him the fair and special event business,
and Buddy Lee, who hired him at his iconic entertainment company, Buddy
Lee Attractions at the beginning of his career.

“Buddy was like a father figure to me and gave me a master’s Degree
in Country Music that allowed me to be an Agent, a Promoter, a Concert
Producer and a Manager. One of his teachings that was instilled in me
all these years was “Never forget… You’re only as powerful as an agent
or manager as the artist you represent.”

And, Conway has worked with some of the best in the business, such as
Country Music Hall of Fame members George Strait, Willie Nelson, Waylon
Jennings, and Emmylou Harris, in addition to current hit makers such as
Jason Aldean and Miranda Lambert. He currently represents Alabama,
Lorrie Morgan, and Randy Travis at his company, Conway Entertainment
Group. Conway served as a talent coordinator for Farm Aid in the 1980s,
and also as Executive Producer of the CMA Music Festival for eleven
years.

In his closing remarks, Conway also gave credit to his family, saying
“I would like to thank and dedicate this honor to my wife of 40 years
Nancy for being my biggest supporter and allowing me to be gone for
days, weeks, sometimes months when business called, while raising our
children, Matthew and Katie, to be the outstanding people they are
today.”