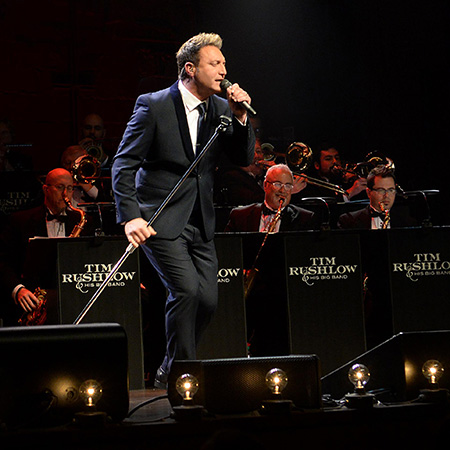 Accomplished multi-genre artist Tim Rushlow, announces the return of his highly-acclaimed “Home For The Holidays” with Tim Rushlow & His Big Band show to the Franklin Theatre for three timeless Christmas classics performances on Dec 2, 3 and 4. Purchase tickets here.

These shows will mark his first back in his home town of Franklin since his two big sold out shows there in 2016.

Rushlow and his Big Band carry on the musical romance and swagger of an
earlier era and will transport guests back to a time when Christmas was
“Classic.” Bing Crosby, Dean Martin, Frank Sinatra and Bobby Darin are
the names that made Christmas music special and timeless. Relive the
romance of this Christmas music tradition in the intimate setting of the
historic Franklin Theater with Tim Rushlow & His Big Band “Home for
The Holidays” with a heart-warming, and soul-stirring concert event led
by multi-platinum recording artist, Tim Rushlow. Tickets are on sale
and available for purchase here.

“I am so excited to bring my big band back to the Franklin Theater, ”
exclaims Rushlow! “There is not a better venue  to swing in the holidays
in classic big band music! Come kick off the season in style with me
and the boys in the band!”

“Tim Rushlow is an accomplished artist who is not afraid to work hard,
especially for his audience,” states Paul T. Couch,  Executive Director,
The Franklin Theatre. “Our audiences can expect to see an expertly
crafted show that will leave them dazzled by Tim’s big band sound and
warmed by the sounds of their Christmas favorites, all expertly
delivered by a superb showman.”

Tim Rushlow has already achieved so much more than most
aspiring musician’s dream of accomplishing. Born in Oklahoma and raised
in Arlington, Texas, Tim catapulted to fame as lead singer for Little
Texas, one of the biggest Country groups of the 90’s. Between 1991 and
1998, the group charted 20 singles on Billboard’s Country chart,
including the Number 1 hit “God Blessed Texas,” the poignant power
ballad and crossover smash, “What Might Have Been,” “Amy’s Back In
Austin” and many others.

When the group originally disbanded, Tim embarked on a successful solo
career shifting from Warner Bros. Records, with Jim Ed Norman, to
Atlantic Records. Tim scored chart-topping hits including his
emotionally moving song “She Misses Him”, which became a Top 5 record
hit and gaining him the opportunity to be a national spokesman for the
Alzheimer’s Association for two years.

Tim went on to have two more record deals with Lyric Street Records and
Universal Records before taking a break from recording to focus on his
ability as an entertainer on tour in his critically acclaimed unplugged
solo show, One Man, One Guitar, One Night, which has taken him
from theatre and cabaret stages to traveling around the world many times
over performing for our men and women in the military.

Tim has an immense amount of drive and passion. When he hears the word
“No,” he simply believes it means, “Not yet.” So in 2014, without
reservation, Tim dove in headfirst to embark on his lifelong dream to
record a Big Band Christmas record. The album, Tim Rushlow Classic Christmas,
was recorded in Nashville using an all-star band and the top players
from the Nashville Symphony. It was received with rave reviews, shooting
the Rushlow penned radio single “What Do I Do With The Blue” to #16 on
the Billboard singles chart and the album #16 on the Billboard
Holiday Album chart where he settled in right behind Frank Sinatra,
making another lifelong dream come true with his name being next to such
an adored American icon.

Never being one to sit still, Tim felt the need to show his admiration
and authenticity for this music and began planning his next gutsy and
risky move. Tim decided to record a full Big Band live concert record
and TV special in front of his peers in Nashville. After seeing the
magical footage, it was decided to take it to American Public
Television. APT was blown away at Tim’s ability to be so genuine and
sing to their current demographic, yet be youthful enough to sing to a
new and younger generation. Tim Rushlow & His Big Band LIVE
showcases Tim’s dynamic “Rat Pack” swagger with classics from the Great American Songbook.
It was a national pledge drive for PBS from 2016-2018 and released as a
live DVD and CD/DVD combo. Tim’s Big Band shows have won critical
acclaim and have been well-received by audiences across the country.

With the recent strong resurgence of ‘90s Country and increased demand
from his fans, Tim is once again focusing his energy into the music that
first brought him to a global audience. He has recently written and
recorded a collection of all new songs which will be a launch pad for
the next phase of his career and he is very excited to be performing his
unique brand of country music – including his arsenal of hits from the
soundtrack of the ‘90s and never-before-heard new music – for fans
everywhere in 2020.

Tim will also continue to perform shows with his big band carrying on the traditions of performing beloved music from the Great American Songbook.