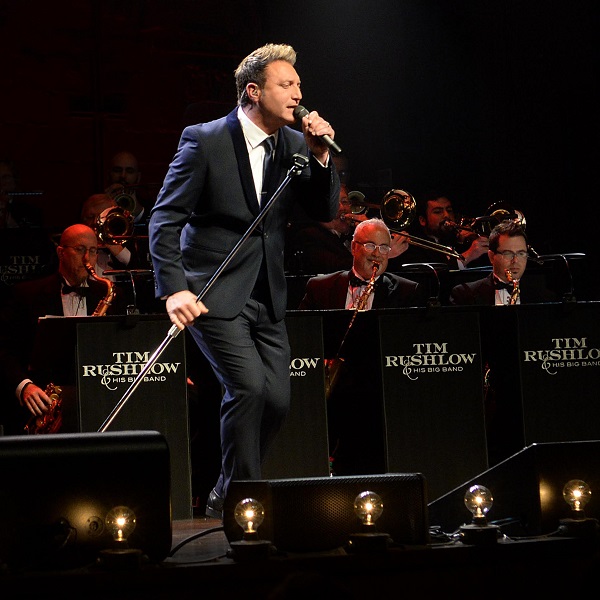 Nashville, Tenn.
– For the first time since the Prohibition Era, The Nashville Palace
will offer Music City an authentic supper club entertainment experience
as it presents “Tim Rushlow & His Big Band: Swingin’ at the Palace!”
opening on November 10. The residency is sponsored by WSM-AM, Gray Line
Tours, Jack Daniels, Roland Audio and Video, Springer Mountain Chicken,
Nashville Convention and Visitors Corp, and Shure Microphones. Due to
popular demand, 9 additional show dates, titled “Home for the Holidays,”
have been added to the schedule. The Christmas themed shows begin
December 1 and proceed until December 21. Tickets to both shows are
available here.

Tim Rushlow and his all-star, 24-piece Big Band will entertain guests
with Great American Songbook classics by Frank Sinatra, Bobby Darin and
Dean Martin, as well as fan favorites from Elvis, Buddy Holly and
others. Guests will walk the red carpet and be greeted by a maître d’ in
a tuxedo before being whisked away into a candlelit, romantic setting
with white linen tablecloths where they will enjoy a delicious dinner
from an exclusive menu and sip their favorite libation from the “Let’s
Be Frank” whiskey and bourbon bar or “Rat Pack Martini Bar.” During the
“Home for the Holidays” shows, patrons will enjoy Christmas favorites
such as “Rudolph The Red-Nosed Reindeer,” “Jingle Bells,” “I’ll Be Home
For Christmas,” and others. There will be Christmas trees and lights,
streams of garland and glamorous holiday décor that is sure to take
audiences down memory lane or create a new holiday experience.

“I am thrilled to have the opportunity to spread the holiday spirit
with the best crowds around,” said Rushlow. “It has been a dream of mine
for years to do this here, and I am so grateful for the support we have
received from both our fans and sponsors.”

“We are proud to be part of a new music tradition in our partnership
with Tim Rushlow,” said Hobbs, owner of the Nashville Palace. “Both
locals and tourists will have a wonderful new option to experience in
the night life entertainment of Music City this winter.”

In support of his residency, Tim will host a weekly one-hour radio
show presented by WSM 650 AM which will focus on Big Band music and its
historical impact on American culture, as well as its influence on
Country artists from Bob Wills to Ray Price to Marty Robbins and many
others. The show will air weekly in October and November. NPT (Nashville
Public Television) is set to air ‘Tim Rushlow & His Big Band- LIVE,’
an hour-long concert special on Nov. 2 at 8:00 PM CT. The program is
currently a PBS special airing Nationally through June 2018.

Tim Rushlow first achieved multi-platinum success as the powerhouse
lead vocalist of country super group Little Texas, with chart-toppers
such as “God Blessed Texas,” “What Might Have Been” and “Amy’s Back In
Austin.” The crooner has also racked up several solo hits including “She
Misses Him.” A three-time Grammy nominee, CMA and ACM award winner, Tim
Rushlow is now living his life-long dream as a curator of the Great
American Songbook. His concert special “Tim Rushlow & His Big Band
— LIVE” is currently airing as a PBS National Pledge Drive through June
2018.Tim Rushlow.

A versatile entertainer who sold millions of records during his time
as lead singer of country music super group Little Texas, Tim Rushlow is
a master song interpreter with a deep, abiding love for the classics.
During the band’s impressive run in the ’90’s, he and the rest of the
Little Texas members charted over a dozen hits including “God Blessed
Texas” and the multi-genre crossover smash “What Might Have Been.”
Following the band’s breakup, Tim embarked upon a solo career with
Atlantic Records and released a self-titled CD that yielded the
heartwarming Top Ten hit “She Misses Him,” about a couple’s touching
battle with Alzheimer’s. Following a few more endeavors in musical
groups and pairings, in 2009 Tim decided to refocus his energies on
honing his performing skills as a solo act, launching a well-received
acoustic tour at smaller listening rooms around the country. The
challenge of engaging audiences and laying his emotions bare on the
stage in front of intimate crowds night after night fired up Tim’s
creativity to a new level and renewed his love for the classic sounds he
grew up listening to and first cut his musical teeth on like Bobby
Darin, Frank Sinatra, Perry Como, Dean Martin, and Andy Williams. And
the experience soon inspired him to take his career in a whole new
direction as the modern-day crooner he had always envisioned himself to
be.