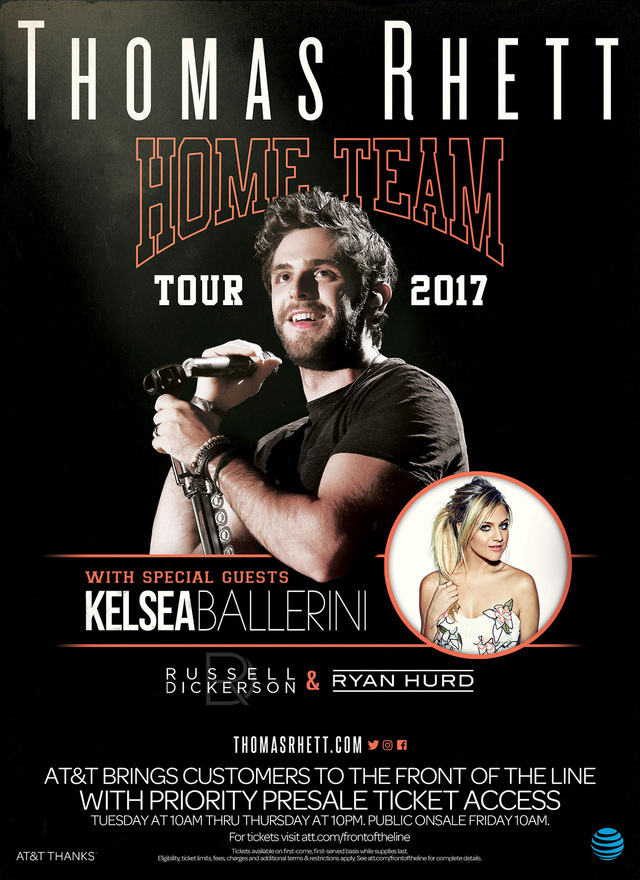 THOMAS RHETT CALLED UP TO THE BIG LEAGUES FOR
FIRST-EVER HEADLINING 2017 HOME TEAM TOUR
The Two-Time CMA Nominee Drafts Kelsea Ballerini along with Fresh New Artists Russell Dickerson and
Ryan Hurd For Run Kicking Off Feb. 23 in Saginaw, MI
NASHVILLE, TN – Sept. 28, 2016 –  “From a promised next big thing to actually being it”(Noisey), multi-CMA
nominee Thomas Rhett has announced the launch of his first-ever
headlining 2017 HOME TEAM TOUR. With special guest Kelsea Ballerini and
up-and-comers Russell Dickerson and Ryan Hurd, the run will open in Feb.
23 in Saginaw, MI and end in Thomas Rhett’s hometown at Nashville’s
Ascend Amphitheater. Fans can visit www.thomasrhett.com to
begin purchasing pre-sale tickets on Oct. 4 before first dates go
onsale to the public Oct. 7. AT&T is sending customers to the front
of the line with AT&T priority pre-sale ticket access ‪via the
AT&T THANKS program. For complete pre-sale details visit ‪att.com/frontoftheline.
“This is really the first time we’ve been able to totally build our own stage and really plan for our show with all our fans,”
said Thomas Rhett. “There has been this undeniable energy out on the
road this year, and I know having Kelsea out there is going to amp
things up even more. Having my own tour also gives me the opportunity to
introduce some people I think are going to explode in the next couple
of years and help give them a platform to reach the fans, like how
Blake, Toby and Jason did for me. I’m a huge fan of both Ryan and
Russell and I can’t wait for my fans to get to know them too.”
2017 HOME TEAM TOUR:
Saginaw, MI @ Dow Event Center*
Erie, PA @ Erie Insurance Arena*
Peoria, IL @ Peoria Civic Center*
Ft. Wayne, IN @ Allen County War Memorial Coliseum
DeKalb, IL @ NIU Convocation Center*
Duluth, MN @ AMSOIL Arena
Wilkes-Barre, PA @ Mohegan Sun Arena at Casey Plaza*
Baltimore, MD @ Royal Farms Arena
Dayton, OH @ Wright State University Nutter Center*
Huntington, WV @ Big Sandy Superstore Arena*
Winston-Salem, NC @Lawrence Joel Veterans Memorial Coliseum*
Knoxville, TN @ Knoxville Civic Coliseum
Southaven, MS @ Landers Center
Norman, OK @ Lloyd Noble Center
Nashville, TN @ Ascend Amphitheater*
*Dates that go onsale to the public on 10/7
As Thomas Rhett continues “pushing up against Country’s music boundaries” (Associated Press),
his PLATINUM certified sophomore release TANGLED UP (The Valory Music
Co.) follows the same path earning critical applause and a Deluxe
edition slated for release Oct. 28. The album has produced three
chart-toppers including the the 2X PLATINUM six-week No. one  “Die A
Happy Man” as well as the PLATINUM  No. one’s “Crash And Burn” and
“T-Shirt.”  The singer/songwriter sparks “an ushering in of Country’s future” (Rolling Stone) as he dominates the Nielsen 2016 Mid-Year List with TANGLED UP,
landing in the Top 5 Country albums while “Die A Happy Man” was the
most streamed song overall with more than 80 million streams. Garnering
two CMA nominations for “Die A Happy Man” after earning a Billboard Music Award for “Top Country Song” along with ACM and ACCA for “Single Record of the Year,”  Thomas Rhett was also recently chosen as one of five of CMT’s Artists Of The Year which airs 10/20 on CMT at 9P ET/PT.
Kelsea
Ballerini has launched to stardom with releasing three consecutive #1
smashes from her critically acclaimed debut album THE FIRST TIME;
the PLATINUM-certified “Love Me Like You Mean It” and GOLD-certified
hits “Dibs” and “Peter Pan,” making her the only female artist in
Country music history to achieve this accolade. The talented
singer/songwriter’s credit is featured on all 12 songs on her debut.
Abuzz with high-profile media looks, the Black River Entertainment
artist co-hosted alongside Arsenio Hall on ABC’s summer replacement
series Greatest Hits. Awarded Billboard’s “Rising
Star” honor at the prestigious 2015 Women In Music event, Ballerini
continues to gain recognition with scoring her first-ever ACM Award win
for New Female Vocalist of the Year, the fan-voted Radio Disney Music Award for The Freshest – Best New Artist (all genre) and the American Country Countdown Award (ACCA) for Breakthrough Female of the Year.
Nashville native
and emerging country music star Russell Dickerson had an incredible
reaction to the release of his  single, “Yours” when it was selected for
Sirius XM’s The Highway Find program. Soon after, Dickerson released
his EP, “Yours,” which first appeared at #2 in the iTunes country store
and #8 in all genres. In just a short amount of time with over 20
million streams on Spotify and two million views on YouTube, Dickerson’s
fans solidified him unanimously as the next big thing.
Ryan Hurd has written songs
that have been recorded by Blake Shelton, Dierks Bentley, Jake
Owen, Maren Morris, Tim McGraw, FGL, among many others. Now, the
Kalamazoo, MI native is lending his own voice to the songs on his
forthcoming debut album on Sony Music Nashville. “We Do Us,” the first
song released on Spotify, received over 2 million streams in just three
weeks. Hurd is featured in Vevo’s dscvr program, he is on Rolling Stone Country’s “Artists You Need to Know” list and CMT named him one of their “Listen Up” Artists of 2016.
For more information and a full list of upcoming tour dates and appearances, visit www.thomasrhett.com.