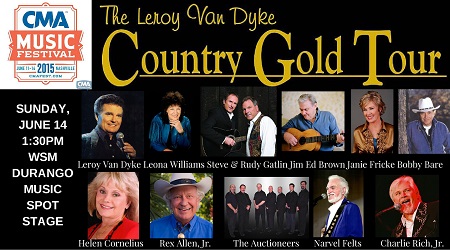 The
Leroy Van Dyke Country Gold Tour takes place on Sunday, June 14 At the
WSM Durango Music Spot Stage at 1:30 followed by autograph party
immediately after show; Leroy Van Dyke of “Auctioneer” and “Walk On By”
fame performs and emcees show
NASHVILLE,
Tenn. (May 12, 2015) – Not many artists can say they were on the CMA
Board of Directors during the planning and formation of the inaugural
Fan Fair which took place at Nashville’s Municipal Auditorium in 1972.
Even fewer can say they will have the honor of performing their
mega-hits at this year’s CMA Music Festival – but, Leroy Van Dyke has earned these bragging rights!

“We are proud to bring our Country Gold Tour
to this year’s CMA Music Fest,” says Leroy Van Dyke. “In the formative
years, I don’t think any of us could have foreseen the magnitude to
which Fan Fair (CMA Music Festival) has grown, reaching its present
importance and impact on the industry. It is a phenomenon!”

If you are fortunate enough to know him, you know Leroy would never brag. It’s just not in his nature. However, it should be noted that he is the only known entertainer who is also
an internationally renowned licensed auctioneer. The hit song
“Auctioneer” was written solely by Van Dyke while living in a squad tent
during his stint in the U.S. Army. Leroy was a Special
Agent, U. S. Army Counterintelligence Corps, in Korea. The debut
single, in 1956, became an instant multi-million seller. In 1961, Leroy
struck pay dirt again releasing his next mega hit “Walk On By.” This
chart topper stayed at Number One for 19 weeks and remained on the
charts for an incredible total of 42 weeks. Billboard Magazine named it “the biggest country music single in recorded history” based on sales, plays, and number of weeks on the charts!

Since its modest inception a quarter of a century ago under the direction of Gladys Van Dyke, Leroy Van Dyke’s Country Gold Tour, in various configurations, has been presented in 25 states and four foreign countries.

“COUNTRY GOLD TOUR” performance for the CMA
Music Festival is on Sunday, June 14 on the WSM Durango Music Spot
Stage at 1:30p (with after-show autograph party!) – here is the lineup: