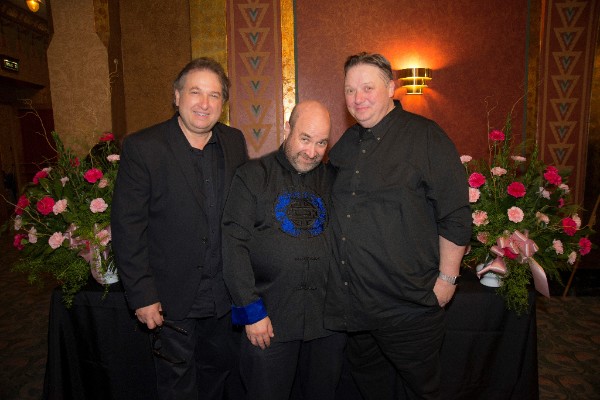 Nashville, TENN — The Kruger Brothers have become world renowned for their unique classically-infused folk/acoustic music. The trio was recently joined by the The Kontras Quartet
for the debut performance of an original work, commissioned to honor
the region, history and legacy of Tennessee’s Roan Mountain. In support
of Breast Cancer Awareness Month,
the Paramount Center for the Arts in Bristol, TN was decked out with
pink bouquets onstage and in the lobby for a reception with the artists
after the premiere of the Roan Mountain Suite.

In honor of October’s National Breast Cancer Awareness Month, the trio
made a donation to Breast Cancer Research. A portion of pre-order sales
of the recorded Roan Mountain Suite project was designated for donation.
The CD is set for release in early 2017 and pre-order sales were
available at the event.

The Roan Mountain Suite is the 5th commission granted to composer Jens Kruger and the Kruger Brothers
trio. The performance coincided with the 50th anniversary of the
inaugural meeting to conserve the Roan, an effort initiated by the late Stanley A. Murray, husband of patron, Judy Murray, of Kingsport, TN.

Originally from Switzerland, Jens Kruger began playing North American
folk music at an early age and was particularly inspired by recordings
of Doc Watson, Flatt and Scruggs, Bill Monroe, and other progenitors of
country, bluegrass and folk music. He writes the music for all of The
Kruger Brothers’ original tunes, collaborating with brother, Uwe Kruger,
for insightful and stirring lyrics that complement the music. In 2006,
Jens began his official venture into the themes and forms of classical
music when he was commissioned to write Music from the Spring
for banjo, guitar, bass and full symphonic orchestra. Jens has since
received four commissions to write classical pieces which The Kruger
Brothers have performed with various orchestral ensembles: Appalachian Concerto with string quartet; Spirit of the Rockies (commissioned by Canada’s iconic Banff Center) with a small orchestra; Lucid Dreamer, a chamber music piece written specifically for and commissioned by the Kontras Quartet; and now, the Roan Mountain Suite.

ABOUT THE KRUGER BROTHERS
Since their formal introduction to American audiences in 1997, The
Kruger Brothers’ remarkable discipline, creativity and their ability to
infuse classical music into folk music has resulted in a unique sound
that has made them a highly respected fixture within the world of
acoustic music. Born and raised in Europe, brothers Jens and Uwe Kruger
began singing and playing instruments at a very young age, and began
their professional career in 1979. With the more recent addition of New
York City native, Joel Landsberg, (who comes with his
own noteworthy musical pedigree, having studied with jazz great Milt
Hinton), the trio has been performing together since 1995, and is now
based in Wilkesboro, NC.
In their ever-expanding body of work – including 15 albums to date –
Jens Kruger (banjo and vocals), Uwe Kruger (guitar and lead vocals), and
Joel Landsberg (bass and vocals) – The Kruger Brothers personify the
spirit of exploration and innovation that forms the core of the American
musical tradition. Their original music is crafted around their
discerning taste, and the result is unpretentious, cultivated, and
delightfully fresh.