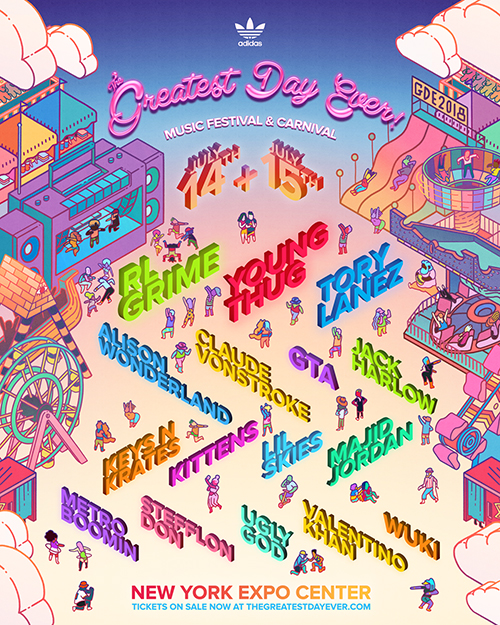 THE
GREATEST DAY EVER! MUSIC FESTIVAL & CARNIVAL RETURNS FOR FIFTH YEAR
THIS JULY, AT THE NEW YORK EXPO CENTER IN THE BRONX, NYC!

(April 2, 2018  – New York, NY)  The
Greatest Day Ever! Music Festival and Carnival presented by adidas
Originals is back this summer for it’s fifth annual event in New York
City, taking place for the second year in a row at the New York Expo
Center in The Bronx, Saturday, July 14th & Sunday, 15th.

Cross-genre
music festival meets carnival, The Greatest Day Ever! provides a great
blend of experiences for everyone in an inclusive environment. Expanding
from a one day festival to a two day summer weekend of fun in 2017, the
event caters to New York City’s multicultural lifestyle. Hip-Hop
concert meets Dance music festival meets county fair carnival, in an
inclusive melting-pot environment where everyone is allowed to enjoy
themselves carefree and have the greatest day ever.

Weekend and single day passes are available now at thegreatestdayever.com