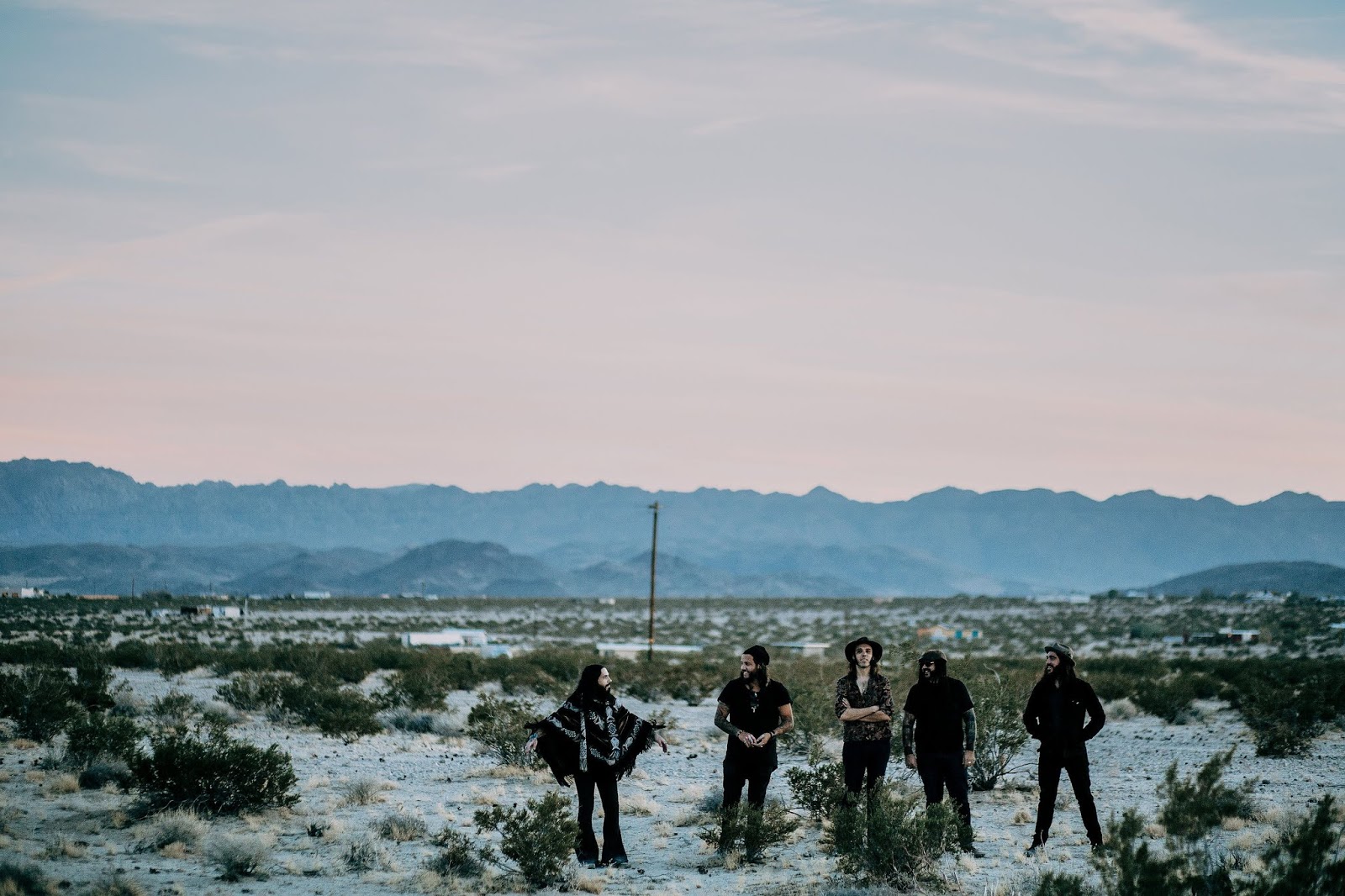 Creature
and the Woods formed in 2014 and came to its current lineup in
2015.  Led by singer-songwriter and guitarist Roger Molina (Noise
Ratchet), they drew critical applause for their live shows and their
up-front 4-part harmonies alá Crosby, Stills, Nash and Young.  The
quintet is made up of a some of San Diego’s most accomplished players
including Dan Cervantes on guitar and pedal steel (Howlin’ Rain, Mrs.
Henry), Justin Rodriguez (Counterfeit) on bass, Jody Bagley (Mrs. Henry)
on keys, and Chad Lee (Silent Comedy, Mrs. Henry) on drums.

With the release of their first EP, Rise in
2017, Creature and the Woods earned a spot for themselves in the vast
Americana landscape with their “howling groove of indie-folk and rock
and roll.”  Both Rise and J Tree are on the Blind Owl
label, a community driven and analog-heavy record label, founded by
guitarist, Dan Cervantes.  Cervantes oversees all of the production,
curating the bands, the recording, graphic design and distribution.  J Tree is
produced by Creature and the Woods and Dan Cervantes and was originally
tracked at Eagle Om Ranch in Joshua Tree, California in December of
2017.  Jordan Andreen who is the official engineer of Blind Owl recorded
the EP and Joe Bozzi did mastering.

“It
was the first full moon weekend, when we were recording,” Cervantes
relays.  “On that first night, our tape machine broke and we thought we
were going to have to scrap the session.  Luckily, our buddy from Blank
Tapes (Matt Adams) was nearby and lent us his tape machine.  The rest is
what you hear on the record.”  Molina considers the weekend as an
almost ghostly experience.  “Before we ever started recording we just
jammed in a drum circle.  I started singing some old song that sounded
tribal and we jammed up and down for like 30 minutes.  When we were done
my heart was racing so fast I had to lie on my back to regain my
energy.  We all knew right then that something crazy was about to
happen.”  The creative session led to some video recordings as well, and
a video for the song, “2 Golden Coins” will be released before May 10th.

“Widow’s
Waltz” is the song that kicks off the EP and is about Molina’s father
and the journey of his burial ceremonies and his mother’s dance between
the year of his passing–her obligated season of mourning and all the
signs, visions and dreams she received at the time. Cervantes’ guitar
underscores the feeling of sorcery while the voices rising in chorus
sing, “Dark days of the summer are ending now” lending hope to finding a
way out of darkness.

“Head
Above Water” is a chant to prolong the endurance of the human spirit.
“Mine and others, I hope,” explains Molina.  “It’s a chant to help rise
above the tumultuous tides of past lovers, forgotten hopes or anything
you still may regret.”  “Oh Well” is an atmospheric psychedelic number
about a mysterious woman who lives high on a hill with a “View of a
world you cannot touch without a spell to heal”. The EP ends with the
melodic and upbeat, “2 Golden Coins”.  “The concept came to me in
Nashville in December of 2017”, said Molina.  “It’s about a trip.  About
finding new hope.  Belief.  New love.  It started me on a whole new
road.  The one that led this band to J Tree.”

Molina
claims to have grown up in headphones. “Music took me somewhere else,
always,” he said. “The Credence Clearwater tape that I flipped over and
over and over.  Every Led Zeppelin album was by all meanings of the
word, shelter.”  Coming from a family of country music players, he was
brought up on songs from Willie Nelson, Neil Young and “more Hank
Williams than I could name.”  It was his Uncle Roger (whom he is named
after) that gets credit for pushing Molina into writing music.  “When I
was a kid, I would follow him to the back of the house where he would
just play and play.  He had a hard time singing the songs, so he would
ask me to sing.  When I was little, I wouldn’t sing, but later at night,
I would lock myself in the bathroom with a riff in my head, and notepad
in hand and try to write the melody. When I got my first guitar, it was
a Les Paul Sunburst, just like the one my grandpa had given to Uncle
Roger.”

Molina
wrote poems as a child and his family told him that he’d make up songs
in the bathroom as soon as he could talk. “I’d repeat them over and
over, making them longer and longer but repeat the same words…I was
writing.”  These days, he is trying to make music that both comforts and
challenges people.  “In the past, I always wrote songs to comfort
me.  Now I’m trying to write them to comfort others.  When people tell
me they cried to a song or listen to it when they need to…that is
amazing to me.”

J Tree is
a kaleidoscope of sound that reaches the unknown spaces of the mind and
body. A tome to what challenges what you believe and helps you to
understand what you already know.  “The making of this record has been
exceptional, remarkable,” Molina praised.  “It’s been a great pleasure
and adventure.  From the first day in the desert until the final
mastering day in LA and all the studios and labs in between.”