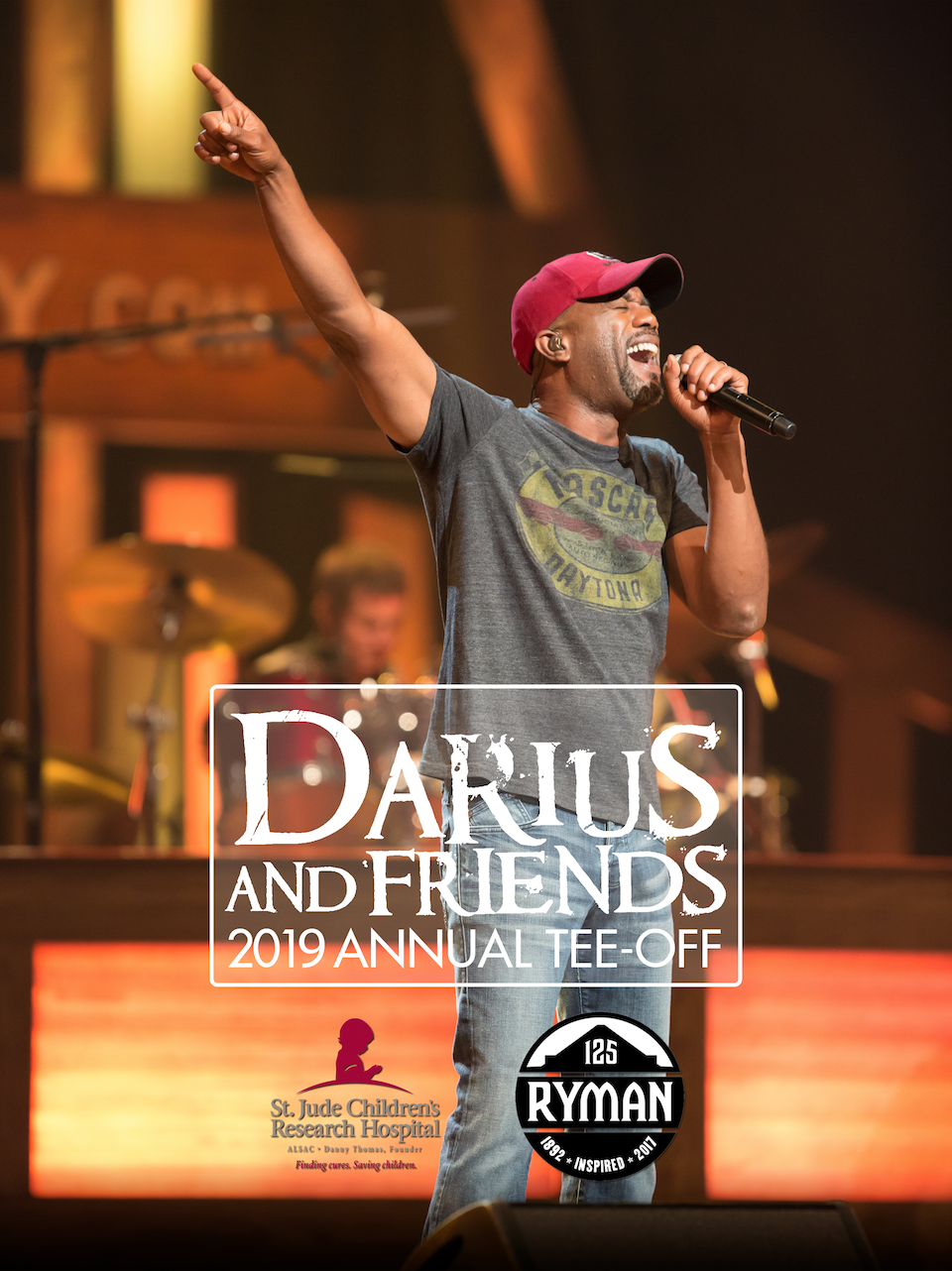 Multi-Platinum superstar Darius Rucker will return to the historic Ryman Auditorium on Monday, June 3 for his 10th Annual Darius and Friends
concert benefitting St. Jude Children’s Research Hospital. The event,
which unofficially kicks off CMA Music Fest in downtown Nashville and
has raised $1.6 million to date, will celebrate hitting the decade mark
with an all-star roster of friends to be announced in the coming weeks.

Rucker, who has always prioritized philanthropic work, was honored with
the ACM Gary Haber Lifting Lives Award last year for his efforts and
will receive the Harry Chapin Memorial Humanitarian Award at the
upcoming 2019 Music Biz Awards. He made a commitment to support St. Jude
Children’s Research Hospital specifically in 2008 after touring the
facility known around the globe for treating childhood cancer and other
life-threatening diseases.

“This event is always special because I love seeing my friends come
together to support St. Jude and the amazing work they’re doing for
families,” shares Rucker. “When we were planning the upcoming Hootie
& the Blowfish tour, it was important to me that we kept this show
on the schedule. Of all the exciting things to come this year, this
night will still be a highlight.”

Friends performing with Rucker in past years have included Lauren
Alaina, Brooks & Dunn, Luke Bryan, Luke Combs, Randy Houser, Charles
Kelley of Lady Antebellum, Ashley McBryde, A.J. McLean of the
Backstreet Boys, Brad Paisley and Kenny Rogers, among others. The lineup
for this year’s event will be announced soon.

Tickets to the 10th Annual Darius and Friends benefit concert start at $50 with VIP options up to $150, available at www.ticketmaster.com.
Pre-sale access begins tomorrow, April 9 at 10 a.m. CT and runs through
Thursday, April 11 at 10 p.m. CT, with tickets on sale to the general
public this Friday, April 12 at 10 a.m. CT.

Rucker first attained multi-Platinum status in the music industry as the
lead singer and rhythm guitarist of GRAMMY award-winning Hootie &
the Blowfish. Since releasing his first country album in 2008, he has
celebrated four No. 1 albums on the Billboard Country chart and
nine No. 1 singles at Country radio, earning a whole new legion of
fans. In 2014, Rucker won his third career GRAMMY award for Best Solo
Country Performance with his 4x Platinum-selling cover of Old Crow
Medicine Show’s “Wagon Wheel.” As a lifelong philanthropist, Rucker is a
continuous supporter of the MUSC Children’s Hospital in his hometown of
Charleston, South Carolina, and has raised millions of dollars for St.
Jude Children’s Research Hospital through his annual Darius &
Friends benefit concert and golf tournament, as well as for more than
200 charitable causes supporting public education and junior golf
programs in South Carolina through the Hootie & the Blowfish
Foundation. This year, he will hit the road with his Hootie & the
Blowfish bandmates for theGroup Therapy Tour as they celebrate the 25th Anniversary of mega-hit Cracked Rear View as well as a forthcoming album with new label home Universal Music Group Nashville.

St. Jude Children’s Research Hospital is leading the way the world
understands, treats and defeats childhood cancer and other
life-threatening diseases. Its purpose is clear: Finding cures. Saving
children.® It
is the only National Cancer Institute-designated Comprehensive Cancer
Center devoted solely to children. Treatments invented at St. Jude have
helped push the overall childhood cancer survival rate from 20 percent
to more than 80 percent since the hospital opened more than 50 years
ago. St. Jude won’t stop until no child dies from cancer. St. Jude
freely shares the discoveries it makes, and every child saved at St.
Jude means doctors and scientists worldwide can use that knowledge to
save thousands more children. Families never receive a bill from St.
Jude for treatment, travel, housing or food – because all a family
should worry about is helping their child live. Join the St. Jude
mission by visiting stjude.org, liking St. Jude on Facebook, following St. Jude on Twitterand Instagramand subscribing to its YouTubechannel.