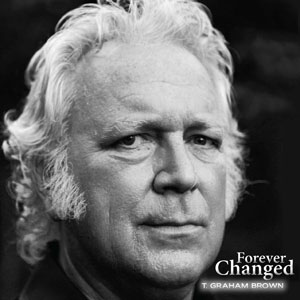 NASHVILLE,
Tenn. (January 27, 2015) – It’s been almost a decade since T. Graham
Brown has released a new studio album, but that drought comes to an end
today with the release of Forever Changed. The disc is released
by Mansion Entertainment and distributed by Sony RED Distribution and
Provident. The album is also available through Cracker Barrel Old
Country Store. Brown co-produced the disc with Mark L. Carman.

In addition to Brown’s trademark blues styling, Forever Changed features
no less than twelve of Brown’s contemporaries and fellow artists
lending their talents to the album. Among the guest list includes Vince
Gill, Leon Russell, Steve Cropper, The Oak Ridge Boys, and Jimmy
Fortune. The disc has already made a little bit of history for the
Georgia native by garnering him his first ever Grammy nomination – in
the category of Best Gospel Roots Album. Brown and his wife Sheila will
be traveling to Los Angeles for the February 8 Grammy festivities.

Brown – whose last studio disc was 2006’s The Present – is
very excited for his fans to hear the new music. “It’s a neat record. I
think it’s probably the best one I’ve ever made, and I’ve got a lot of
friends singing on it. I picked out a batch of songs I liked, and it
turned out exactly like I wanted it to. Then, it gets nominated for a
Grammy, and I’ve never been nominated for one before, so I’m loving
every minute of it.” The album’s first single, “He’ll Take Care Of You,”
the collaboration with Vince Gill, is currently making an impact at
both Country radio and Southern Gospel radio.

Brown was born in Georgia, and played in local bands throughout the
1970s, making the move to Nashville in the early 1980s. His talent came
to the attention of Capitol Records executive Jim Fogelsong, who signed
him to the label. His first single, “Drowning In Memories,” immediately
connected with fans, landing in the Top 40 of the Billboard Hot Country Singles Chart,
but the best was yet to come. His sophomore release, “I Tell It Like It
Used To Be,” hit the Top-10, kicking off a series of hits that included
“Hell and High Water,” “Darlene,” “Come As You Were,” and “Don’t Go
Out,” a 1990 hit single that paired him with Tanya Tucker. In 1998,
Brown charted with the personal “Wine Into Water,” a song that detailed
his long and painful struggle with alcohol addiction. Brown re-cut the
song on Forever Changed with Jimmy Fortune.

2015 marks three decades since Brown first hit the charts, and the
singer will celebrate by taking his unique blend of Country and Blues on
the road.