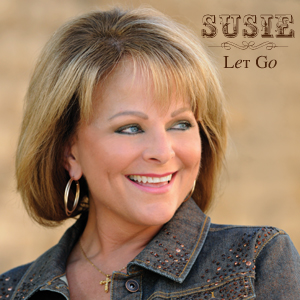 This award winning Christian singer shares an encouraging message of faith and love…
Susie has yet again delivered the goods on this her 15th album, which is the follow up to her superb 2006 release COUNT IT ALL JOY. In the same vein as her older sister Nashville superstar Reba McEntire, she has a gift for finding songs that have a positive message, which often tell a story that conveys hope and comfort to the listener. In 2008 Susie has made a breakthrough on UK National Radio courtesy of BBC Radio 2’s Good Morning Sunday Show, receiving regular airplay and featured as a Spotlight artist.

The theme for “Let Go” is Hebrews 12:1, its transcript is printed on the CD tray inlay. The album is produced by Billy Aerts who has been associated with the band Lobo for more than 35 years and as a staff writer he had the title cut on Kenny Chesney’s 1999 ‘Everywhere We Go’ album. Joe Cocker, Holly Dunn, Lee Greenwood, Paul Overstreet, Janie Frickie, Jim Stafford and many others have also recorded his songs. Billy also contributes on this project co-writing two of the songs and singing backup vocals. The magnificent opening song Never Alone brings forth an uplifting tempo with its soaring chorus lines Never alone / I’ll be in every beat of your heart / When you face the unknown / Wherever you fly / This isn’t goodbye / My love will follow you stay with you / Baby you’re never alone. It did not surprise me to read that the talents of Gary Burr, Victoria Shaw and Sarah Buxton (who co-write Keith Urban’s Stupid Boy) penned such high quality fare. This song has also had an outing on pianist Jim Brickman’s album ‘Escape’ with Sara Evans lending her voice.

Throughout this album Susie’s voice radiates warmth and crystal that conveys rich emotion typified on the gospel flavoured ‘Sky Full Of Angels’ which was originally recorded by Reba on her album Room To Breathe back in 2003. Sticks and Stones which Susie co-wrote with her niece Autumn McEntire begs the question that Words are like fire; they can bring warmth and comfort, or burn and destroy. On her website Susie explains that after two separations and now divorce, after 25 years of marriage she was unable to continue in a situation of verbal and mental abuse but has chosen to do what was best for her and three adult children. Sharing with her fans that this 13-track collection of songs means a lot to her and a wish that they drive home a message of hope to everyone. This is typified on the superb up-tempo title track Let Go, with its super-hooky melody, written by young Texan Christian / pop writer Amy Douglas -It’s heartfelt plea is truly inspirational.

The emotionally charged If There Hadn’t Been You will be familiar to fans of Billy Dean written by master tunesmith Tom Shapiro, with the heart-rending perfectly pitched vocal, delicate guitar (Pat McGrath) and an aching fiddle( Wanda Vick) provides a blue-chip country weeper. The achingly beautiful ‘Less One Day’ another album stand-out enhanced by the sweeping steel guitar (Scotty Sanders) is a song displaying unequivocal love and devotion to a partner, which is encapsulated by the lines: If you live to be a hundred I can only pray / That I live till you’re a hundred ..Less one day

Other album highlights include Help Is On The Way, astute song choice here, which wholly suits Susie’s style. This was originally written by Barrie Shorrock the lead singer of Australian group The Little River Band who in 1977 with this track had a #1 single in their homeland and a #14 position on the Billboard charts in the States. This remake with its rasping electric guitar (Tom Hemby) could perhaps become a modern day anthem?

One of Billy Joe Shavers best known tunes ‘Old Chunk of Coal’ is as country at it gets and here it receives a refreshing new airing. The musicianship is first class, with the guitar, fiddle, steel and piano trading licks producing a clean and masterful sound. The delicate closer ‘I Will Rest In You’ illustrates the artist’s deep faith and through it a determination to make it through troubled times.

Religious in nature yes but delightful musical enjoyment to gladden the heart.