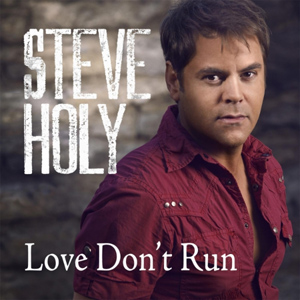 Steve Holy – Love Don’t Run (CD Single Review)
Release Date – 21 December, 2011
Label – Curb Records
Writers – Rachel Thibodeau, Joe Leathers, Ben Glover
Time – 3:41
Rating (Out of 10): 7/10
‘Love Don’t Run’ is the current single for the 39 year old fresh-faced Texan Steve Holy who hails from Dallas. It is the title cut from his album which came out on September 13, 2011. Released by Curb Records they have a policy of not putting out an album until singles have made a significant impact at radio. This explains the reasons as to why it has been 5 years since a project of new songs has finally materialized from Holy who is best known for his smash ballad ‘Brand New Girlfriend’ which after 36 weeks hit the #1 spot.
This new power ballad was written by Rachel Thibodeau (‘I’ll Still Be Me’ and ‘Love Land’ cut by Martina McBride), Joe Leathers (co-wrote ‘Hemingway’s Whiskey’ – Kenny Chesney) and Ben Glover at a Florida song writing retreat in Rosemary Beach. The three drew on their own feelings from long-term marriages to craft a beautiful but honest straight-from-the heart song about enduring the difficult times of a relationship where love can’t hide in the shadows.
Steve with a new found energy teams up once more with producer/songwriter Lee Miller. Colt Cameron from Curb pitched the song to Holy who immediately realised this would be a terrific lead-off single. It almost didn’t happen when it was discovered that Ronnie Dunn had the song on hold but then luckily for Holy’s sake didn’t decide to cut it on his first solo project.
With delicate piano and a softly voice in its opening lines Steve in a somewhat monologue styling offers the words:
“This is gonna hurt, this is gonna hurt like hell, This is gonna damn near kill me, sometimes the truth ain’t easy, I know that you’re scared of telling me something, I don’t wanna hear, but baby believe that, I’m not leaving, you couldn’t give me one good reason”
Joined by the purr of a Hammond B3, Steve digging deep whilst allowing love to conquer everything despite the obstacles that obstruct its rocky path sings with raw emotion in the chorus:
“Love don’t run / Love don’t hide / It won’t turn away or back down from a fight / Baby I’m right here / And I ain’t goin’ anywhere / Love’s too tough / It won’t give up, no not on us / Baby, love don’t run”
As the passion intensifies a wispy pedal steel, punchy drums and edgy guitar add bite to the mix. With say-it-like-it-is but not cheesy lyrics Holy is prepared to do whatever it takes to make things work, avoid the easy option, and not let a precious love slip from his grasp as he delivers the lines of the second verse:
“Let’s lay it on the line, I don’t care if it takes all night, This is gonna makes us stronger, it’s gonna make forever longer, I know it’d be easier walking away but what we got is real, And I wanna save us, baby we can do it, Baby we’ll get through it cause”
The production and the vocals tend to a get a little forceful but this can be forgiven when there is so much at stake to loose but then with a tender heart offers a hand and the romantic caring words:
“So come over here and lay down in my arms, Baby tell me everything that’s on your heart, cause”
This song has been a slow burner on the Hot Country Charts and after 37 weeks sits at its current peak position of #19 thus providing his third biggest hit song of his career. It has to date sold around 200,000 digital downloads and the album has debuted at #22 on the Country album charts with nearly 4000 fans taking it home to share.
The video directed by Eric Welch portrays in rather classy English setting a forbidden love where the daughter of a wealthy family is powerless when falling for the charms of a handsome young yard boy.
About Steve Holy
When Steve Holy’s breakout smash, “Good Morning Beautiful,” stood a top the country charts for five straight weeks in 2002, it sparked a fire that has continued to smoulder throughout his decade-long career. But it’s been a slow burn, and a testament to the dogged persistence and unyielding tenacity that Holy has displayed since his first big break in 1993, when he beat out 500 hopefuls in the Dallas-Fort Worth area Johnnie High Country Review, the same contest that launched the career of LeAnn Rimes. It was another four years, however, before he signed with Curb Records, and three years after that, his debut album, Blue Moon, was released in 2000.

Despite moderate success with a couple of top 20 singles, “Blue Moon” and “The Hunger,” it was not until more than a year after its release that the album first entered Billboard’s Heatseekers chart, and Holy was four singles deep when “Good Morning Beautiful” finally reached #1, a full 18 months after Blue Moon launched. The earnest, charming ballad struck a sweet spot with country fans, later being named Billboard’s #10 Top Country Song of the Decade 1999-2009. Lightening did strike twice, but not until 2006, when Holy again reached #1 with the playful “Brand New Girlfriend.” (Read more at