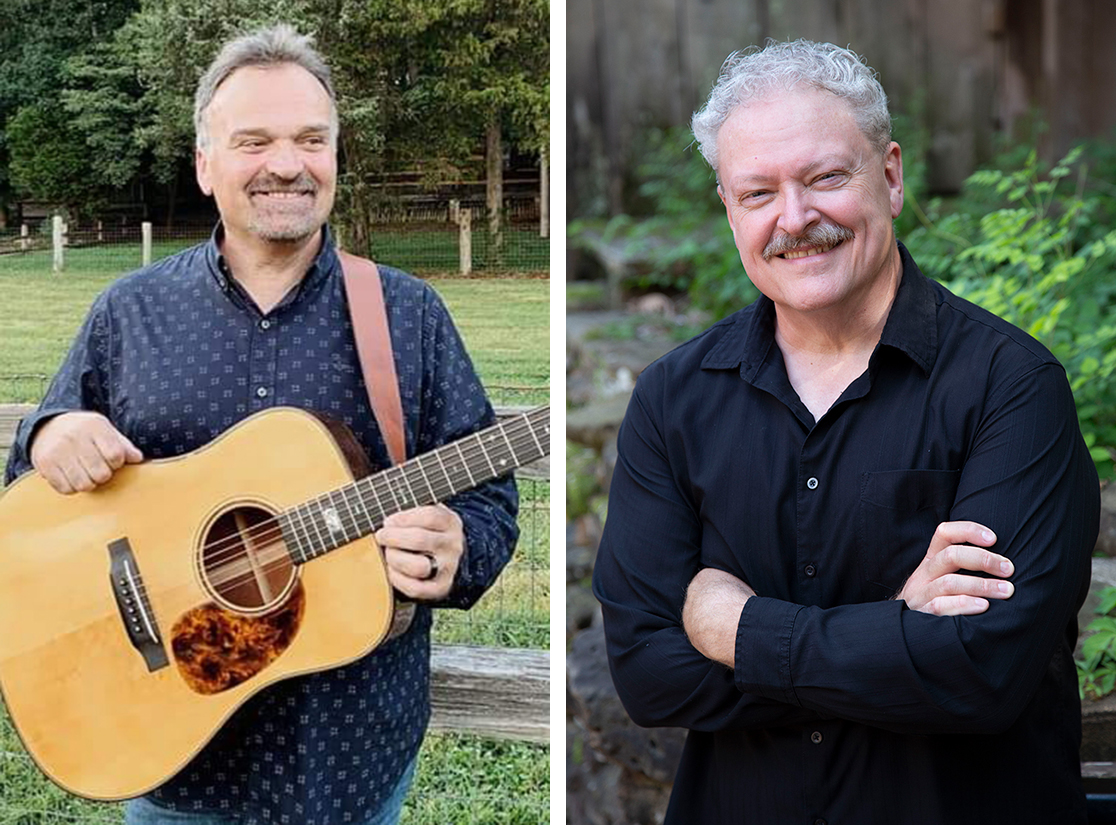 The powerful songwriting of accomplished musicians Steve Gulley and Tim Stafford was first widely recognized when they earned an International Bluegrass Music Association Song Of The Year Award in 2008 for “Through The Window Of A Train,” the title track of an album recorded by Stafford’s group, Blue Highway. The duo followed that award with the release of their own album, Dogwood Winter, in 2010. Now, Gulley and Stafford have signed with Mountain Home Music Company to release new music, beginning with singles and culminating in a full album.

“I’m thrilled, and I know Steve is also, to be working with the folks at Mountain Home,” Stafford says. “Top-notch all the way!”

Gulley and Stafford have both established their names in bluegrass as key members or leaders of other noted groups in the genre. Gulley performed with Doyle Lawson & Quicksilver, Mountain Heart and Grasstowne before starting his own Steve Gulley & New Pinnacle. Stafford performed with Alison Krauss & Union Station before co-founding award-winning band Blue Highway.

Across the years of building a song catalog that already includes some 70 cuts, Gulley and Stafford have refined a writing style filled with echoes not only of bluegrass models like Bill Monroe and Carter Stanley,
but of legendary singer-songwriters from folk, rock and country music.
The results are sophisticated but elemental, down-to-earth but more than
occasionally philosophical, and always eminently singable and easily
memorable — and for proof, listeners will need to look no further than
their new recordings, which build on the carefully-crafted yet seemingly
effortless bluegrass foundation of their earlier work.

“Tim and I are really excited to share the new music and couldn’t be happier about getting to work with the folks at Mountain Home,” says Gulley. “It’s a great fit for us and our music.”

Though they’re each veteran songwriters and artists—both in bands and on
their own—Steve Gulley and Tim Stafford have enjoyed special acclaim as
one of the most creative and successful songwriting teams in bluegrass
music, with scores of recorded co-writes to their credit.

Steve Gulley cut his musical teeth at Kentucky’s legendary Renfro Valley
Barn Dance and Jamboree, where he came to serve as musical director
before launching into full-time touring in the mid-1990s with bluegrass
Hall of Famer Doyle Lawson & Quicksilver. By the beginning of the
21st century, he’d moved on to co-founding the award-winning Mountain
Heart, followed by Grasstowne, and then, in 2014, his own Steve Gulley
& New Pinnacle, which has enjoyed a steady presence on bluegrass
airplay charts, including four #1 hits. Steve is a sought-after
vocalist, who appeared on the acclaimed Keith Whitley project, Sad Songs
& Waltzes, as well as on albums by award-winning artists like Dan
Tyminski, Ronnie Bowman and Dale Ann Bradley, and a popular radio host
with a weekday morning show on Knoxville’s renowned WDVX. As owner and
operator of Curve Studio in Cumberland Gap, he’s recorded and produced
projects for a growing list of fellow artists. In recognition of his
long musical career and help in the development of young and aspiring
talent, Steve was awarded an honorary Doctorate of Music from
Tennessee’s Lincoln Memorial University in 2016.

Tim
Stafford performed locally around his native East Tennessee in the late
1980s before joining Alison Krauss & Union Station, with whom he
recorded the transformational Grammy recipient, Every Time You Say
Goodbye, in 1992. In 1994, he became a co-founder of and guitarist for
Blue Highway, one of the music’s most beloved and respected bands, which
has been nominated for 3 GRAMMYs, won a Dove Award and collected nearly
30 International Bluegrass Music Association awards. He’s a two-time
IBMA Songwriter of the Year who works with a variety of co-writers, and a
widely-recorded studio guitarist who’s recorded with artists ranging
from Willie Nelson and Jorma Kaukonen to bluegrass Hall of Famers Jesse
McReynolds and Larry Sparks. Tim has also served regularly as a producer
for others, including for two IBMA award-winning albums; co-authored
Still Inside: The Tony Rice Story, a widely-praised authorized biography
of renowned guitarist; taught music, American history, Mass
Communications and Popular Culture and more at colleges and
universities; and sat on the IBMA’s Board of Directors in two separate
stints, once serving as the Vice-Chair. In 2015, Tim was named a
Distinguished Alumnus in the Arts by the East Tennessee State University
National Alumni Society.

It’s
no surprise, then, that when these two accomplished musicians get
together, the creative sparks fly. Indeed, there’s something magical
about the collaboration — first widely recognized through an IBMA Song
of the Year trophy in 2008, when Blue Highway made their “Through The
Window Of A Train” the title track of their album, and confirmed in 2010
with the release of their own duo album, Dogwood Winter. Yet though
dozens of their songs have been recorded by a wide variety of bluegrass
stars, it wasn’t until 2020 that the two reunited as performing partners
for Mountain Home Music Company. Now, as they move forward to not just
write, but record together, Steve Gulley and Tim Stafford have placed
themselves securely in the forefront of a movement that simultaneously
honors bluegrass traditions and leads into the future, establishing them
as an indelible influence on our modern roots music world.