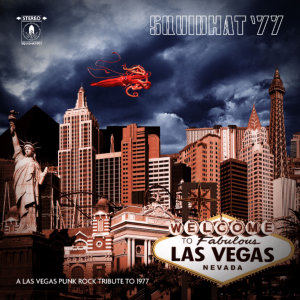 Las Vegas, NV, March 7, 2017 – For Record Store Day 2017 SquidHat Records
is proud to announce the release of SQUIDHAT ’77: A Las Vegas Punk Rock
Tribute To 1977. The 22 track album, released on CD and limited
pressing double gold vinyl, is available nationally and internationally
through MVD Entertainment.
It’s the 40th
Anniversary of the greatest year in rock n roll history! This limited
pressing double album features Las Vegas’ best punk bands paying
tribute to the iconic songs that cemented arena rock, invented punk and
changed music forever. From The Ramones to Fleetwood Mac to ELO and
beyond, hear what the next generation of young musicians has to say
about the songs and the year that defined our generation.

“I was 8 years old for most of 1977.” says SquidHat
founder, Allan Carter. “Hell, my wife wouldn’t even be born for another
11 years. Music for me music was all about KISS which eventually took
me to Led Zeppelin and Black Sabbath. Later I would discover The
Ramones, Pink Floyd, The Clash, Stevie Wonder and Parliament
Funkadelic, proving to me again and again, time after time, album after
album … that 1977 defined music for me, my friends, and every
generation since.”

So if Leo Sayer ever made you feel like
dancing or Rose Royce ever made you get a car wash. If Manfred Mann’s
Earth Band had you blinded by the light, or ABBA called you their
dancing queen. If you ever checked into the Hotel California, longed
for an undercover angel, or let Debby Boone light up your life on the
way to becoming the punk fan you are today, this album is for you.
Perhaps, after all this time, these really are the droids you’re looking for.

About SquidHat Records
SquidHat Records is an artist
friendly, independent record label and multi-media company created to
help talented, interesting, creative and passionate artists record and
promote their music or performances, develop their brand and image, and
increase their exposure to a larger audience. Our focus includes, but
is not limited to, the Punk Rock, Aggressive Indie and Subculture
scenes.