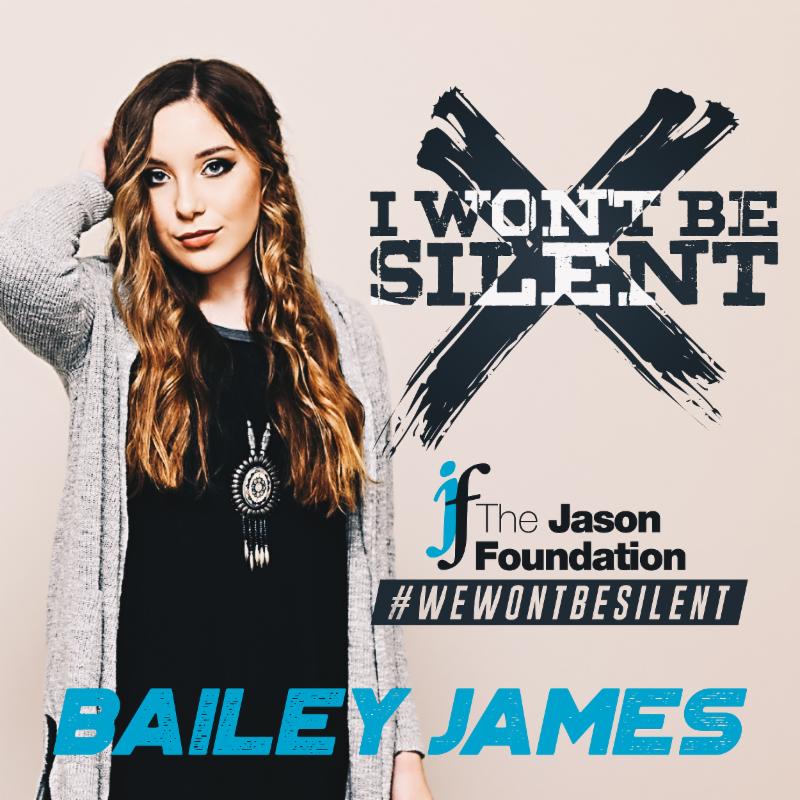 With the success already climbing with her current radio single, Devil Won’t Take Me Down,Bailey James urges listeners to take action in her anthemic new song, I Won’t Be Silent.

Before the loss of her brother to teen suicide, Bailey joined The Jason Foundationas
the National Youth Advocate and since then, she has partnered up on
multiple events with them to help raise awareness to the silent epidemic
of youth suicide. With the newest campaign from The Jason Foundation,
Bailey becomes the face of this movement with her original song I Won’t Be Silent.

“The
Jason Foundation is proud to have our National Youth Advocate Bailey
James become the face of this awareness campaign,” says Clark Flatt,
President of The Jason Foundation. “These days, it can be challenging to
reach the younger generations, but the way that Bailey promotes our
mission really resonates with her audience. Many times, a young person
will be the first person to spot worrying behaviors in a friend, so it
is imperative that we reach the youth of today.”

The
song, written by Bailey with Jeanie McQuinn, Julie Downs, and Steve
O’Brien and produced by Jeffrey Teague and Jeremy Mayfield is available
on all major streaming and digital retailers includingSpotify,iTunes,
etc. Bailey is wanting to make a strong impact on this national
conversation by also offering the song for free. To receive your FREE
copy of the song, visitwww.baileyjamesgang.com/jfi/or text JFI to 797979.

Bailey
and The Jason Foundation are challenging everyone to raise the
conversation, learn the warning signs and challenge others. Numerous
posts have been made on social media from people using the hashtags
#IWONTBESILENT or #WEWONTBESILENT to help save more lives. Bailey is
scheduled to perform at numerous events with The Jason Foundation and is
also gearing up to visit schools across the country in support of the
prevention of youth suicide.

Having
experienced more heartbreak than most will feel in a lifetime, Bailey
looks to her music to inspire others.  “My current radio single [Devil Won’t Take Me Down] is about moving forward after the loss of my brother. I Won’t Be Silent is about speaking up and getting help. There’s no need to hide it. No shame to fight it. Tell someone. Don’t be silent!”

About Bailey James:  With
over 145k followers across her social media platforms, this rising
country artist is stamping her name in country music. With her latest
radio release, Devil Won’t Take Me Down, Bailey
wrapped up a successful Country Radio Seminar with numerous media and
radio interviews. She is also getting ready to head out on a full-fledge
radio tour in support of this.

With
positive feedback from radio and press including one from renowned
music critic, Robert K. Oermann, who said “I’ve liked everything she’s
ever put out so far…she’s a master chef as a singer…” She has appeared
and performed at the legendary venues such as the Bluebird Café, the
Wildhorse Saloon and The Listening Room as well as the home of the Grand
Ole Opry — radio station WSM-AM, and taken part in multiple CMA Music
Festivals.Her passion for music can be heard in her powerful live
performances, advanced songwriting, and a level of artistry that is well
beyond her years. The genuine love she has for music and helping others
shines through and promises to only grow stronger as this teen
continues her musical journey.