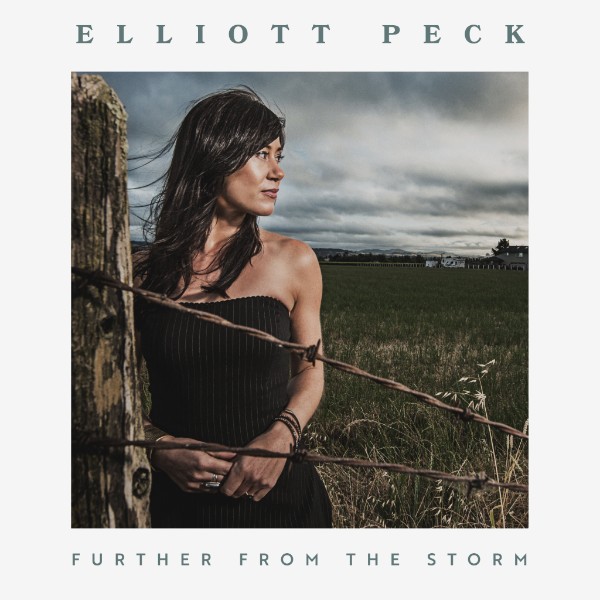 Lauded Bay Area singer and Blue Rose Music artist Elliott Peck released her debut album Further From The Storm
today – now available to purchase and stream. Produced by Karl Derfler
(Tom Waits, Dave Matthews), fans got a taste of the “unflinchingly
honest” artist’s album with the exclusive premiere of track “Out
Sailing” yesterday with The Boot. “With
a powerful voice and stark lyricism, Peck brings a quiet intensity to
the brooding, tender ‘Out Sailing,'” said the outlet of the track.

“Further From The Storm explores universal themes of love, loss
and self-discovery, set to a backdrop of soul, mixed with a modern
country sound,” Peck told The Boot. “These are songs that come from both personal experience and careful observation of the relationships around me.”

A native of Michigan, Peck first fell in love with live music during
family trips to Chicago. “I saw Koko Taylor and Ray Charles and just
fell in love with the Chicago blues at a young age. It was the first
music I started singing and it made me want to explore my voice.” After a
brief residence in the Windy City, Peck moved to San Francisco, where
she began singing and writing alongside Grahame Lesh in Midnight North.
The band would go on to release three studio albums in addition to
touring nationally and serving as the house band at the famed Terrapin
Crossroads. Relix praised the outfit’s soulful, harmonized vocals,” while The Washington Post hailed their “exuberant, twangy” sound, and Pop Matters raved that “Peck shines” in the band, “delivering a bluesy country rock vocal.”

The creation of Further From The Storm marks a transformation
in Peck’s artistry. “This album was the first time I’d taken such raw
material and developed with new musicians on the fly. It was definitely
challenging and it really pushed me as an artist, but it turned out to
be one of the most rewarding experiences I’ve ever had in the studio.”

The release coincides with Peck’s European tour, which has already
included a 10-night residency in Barcelona, Spain, as well as stops in
Belgium and the Netherlands.

As one of the most sought-after vocalists on the West Coast and member
of band Midnight North, Elliott Peck appeared on bills with the likes of
Bonnie Raitt and has lent harmonies to everyone from Phil Lesh and Bob
Weir to Jackie Greene and Reid Genauer. Now, with her solo debut Further From the Storm,
she draws on classic country, blues, R&B, and jazz to create a
sound both timeless and worth repeated listening. Produced by Karl
Derfler (Tom Waits, Dave Matthews), the record serves as a brilliant
showcase for Peck’s vocal prowess and songs that are vulnerable,
plainspoken and unflinchingly honest. The release coincides with the
Michigan-native’s European tour, which kicked of October 5th with a
ten-night residency in Spain and ends October 28th with a performance in
Herent, Belgium.