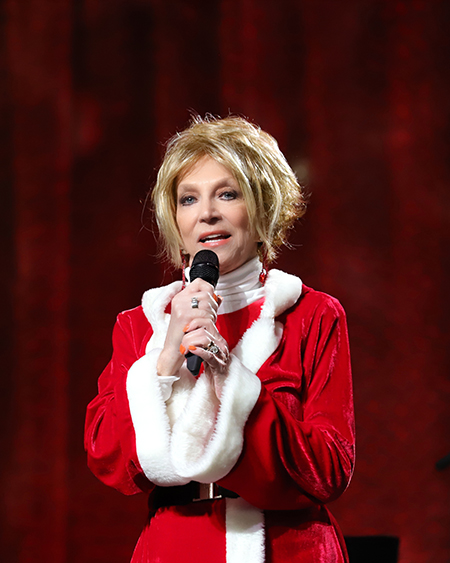 “Jeannie Seely is what the Senior Christmas ShinnDig is really
all about. Like me, she could be a guest at this event, but she chooses
to give her time, talent and wit to bless all of us. I’ve been hosting
Senior Citizens Christmas Parties around the country (in North Carolina,
Florida, Louisiana, Oklahoma and right here in Nashville, TN) for 40
years,” exclaimed George Shinn. “Jeannie has been singing at the
Nashville Senior Christmas ShinnDig since it started six years
ago and I can’t imagine the show without her.  Her talent continues to
amaze me and I’m grateful each year when she says she will perform!”

“This event has been one thing I have looked forward to every year,”
said Jeannie Seely. “It just wouldn’t seem like Christmas if I couldn’t
be a part of this wonderful event. It brings such joy to so many. I kind
of think George Shinn might be Santa Claus! It is such a wonderful
thing that Mr. Shinn does every year and I am honored to be included.”

The special event was established to honor Nashville senior citizens by
George Shinn and the George Shinn Foundation as a promise to his mother
to always remember our seniors. Approximately 800 seniors from the
greater Nashville area were served at the free luncheon highlighted by
holiday entertainment, very special door prizes as well as a car given
away to a community member in need.

About The George Shinn Foundation:

The George Shinn Foundation is dedicated to helping
people in need. It is committed to building God’s kingdom and reflecting
its founder’s deep Christian faith by furthering the work of churches,
ministries, missionaries, and non-profit organizations. One of The
Foundation’s most important outreach efforts to date, The George Shinn
Foundation Clinic in Haiti, was officially dedicated in May 2013.In
October 2019, the George Shinn Center was dedicated on the campus of
Lipscomb University.  The George Shinn Center serves as the hub of the
George Shinn College of Entertainment and the Arts and as a Welcome
Center for prospective Lipscomb University students. The new center taps
into the power of storytelling to enrich the community and future
students. The Foundation has a long-standing partnership with
organizations working to rebuild Haiti after the devastating 2010
earthquake and has contributed to projects there including serving a
school, orphanage, and church complex to the poor in Port-au-Prince.
Nearing completion but already serving patients, The George Shinn
Foundation Clinic is a multi-story urgent care medical clinic. After his
diagnosis and successful treatment of prostate cancer, George Shinn
created The Shinn Foundation as a way to extend his resources to others.

The George Shinn Foundation is dedicated to making a difference among
the people it serves. By providing for basic needs, answering calls for
help in times of crisis, and equipping ministers, The Foundation aims to
offer the love of Christ and the hope of the Gospel to those who
suffer.

Country music legend Jeannie Seely has achieved chart
topping songs as a solo artist, as a duet partner, and as a songwriter.
Her most recent accolade is receiving an honorary Doctorate of Arts from
LMU for most prestigious recognition for her many groundbreaking
accomplishments in the music industry, as well as her support and
encouragement of new talent. Seely also was honored with the “Standing
Ovation” Award by the Donelson-Hermitage Chamber of Commerce Women in
Business in 2019 and it will subsequently be named the “Jeannie Seely
Standing Ovation Award.” Early in her career, Jeannie’s deeply moving
vocals earned her the nickname of “Miss Country Soul”– a title that’s
still used today. Jeannie’s biggest dream came true when she was
inducted as a member of the world-famous Grand Ole Opry, becoming the
first Pennsylvania native to do so. Jeannie also became the first female
to regularly host segments of the weekly Opry shows. Jeannie takes much
pride in her involvement and support of musicians’ rights. In 2017,
Jeannie celebrated her 50th anniversary as a member of the Grand Ole
Opry.  From her 1966 Top 10 Billboard album The Seely Style to her
recent self–produced album Written In Song, consisting entirely of songs
she’s written, Jeannie’s recordings have spanned six decades and
provided enjoyment to country music fans all around the world. In 2018
Jeannie Seely was honored by receiving a star in the Music City Walk of
Fame. In his 2003 book “Finding Her Voice: Women In Country Music,”
music critic Robert K. Oermann wrote, “With her chin-out, tough/tender,
heart-of-gold manner, Jeannie Seely remains one of country’s most
completely modern female personalities,” and that statement still holds
true. Keep up with all things Jeannie Seely at www.jeannieseely.com.