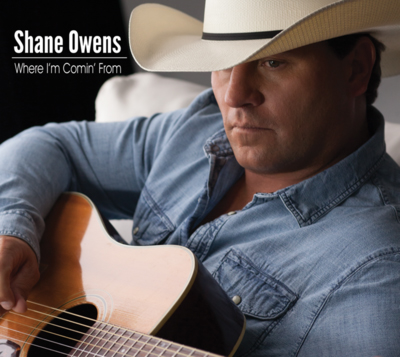 Shane
Owens makes traditional country music for the modern world. Timeless
and timely, it’s a classic sound with a contemporary edge, driven
forward by a mix of southern storytelling, Bible Belt twang, and Owens’
big, booming baritone. His latest album is titled WHERE I’M COMIN’ FROM,
and the new single from the album is ‘Lie.’ Owens recorded the album
earlier this year at Nashville’s Sound Emporium Studios. He was recently
named ‘Independent Artist of the Year’ at the MusicRow Reveals 2018
Country Breakout Awards.

[1] Preshias: Tell me, Shane, what is your earliest musical memory?

Shane: singing in church at about 8 years old.

[2]
Preshias: If you were to be left on a deserted island for one year and
you could pick three albums to be there with you and couldn’t pick any
of your own, what would you pick?

[3] Preshias: Which song or album are you listening to the most right now?

[4] Preshias: Please finish the sentence: I would love to have been there in musical history when…..?

Shane: When Alan Jackson went in to the Country Music Hall of Fame.

[5]
Preshias: Your house is on fire – all your family, children and pets
are saved. By the trick of fate you are told you can run in and get one
item to carry out, what will you save from the flames?

[6] Preshias: If you could have dinner with George Washington or George Strait, which one would you chose and why?

[7] Preshias: Which one of superman’s powers would you like to have?

Shane: His ability to fly.

[8]
Preshias: If you could record or perform a song with another artist or
group, (dead or alive) who would that “dream duet” be?

[9] Preshias: If you could be given credit for writing one song that has already been written, what would be your song?

Shane:
‘He Stopped Loving Her Today.’ [Note: the iconic song written by Bobby
Braddock and Curly Putman, and recorded by George Jones.]

Shane: Where would I go to spend it? Wow hard question!

Shane: I would spend it on a new boat.

[12]
Preshias: If you could get a phone call from one person in the world
right now (living or deceased) whom would you like to hear from?

Catch up with Shane Owens’ music, merch and tour schedule at https://www.shaneowenscountry.com