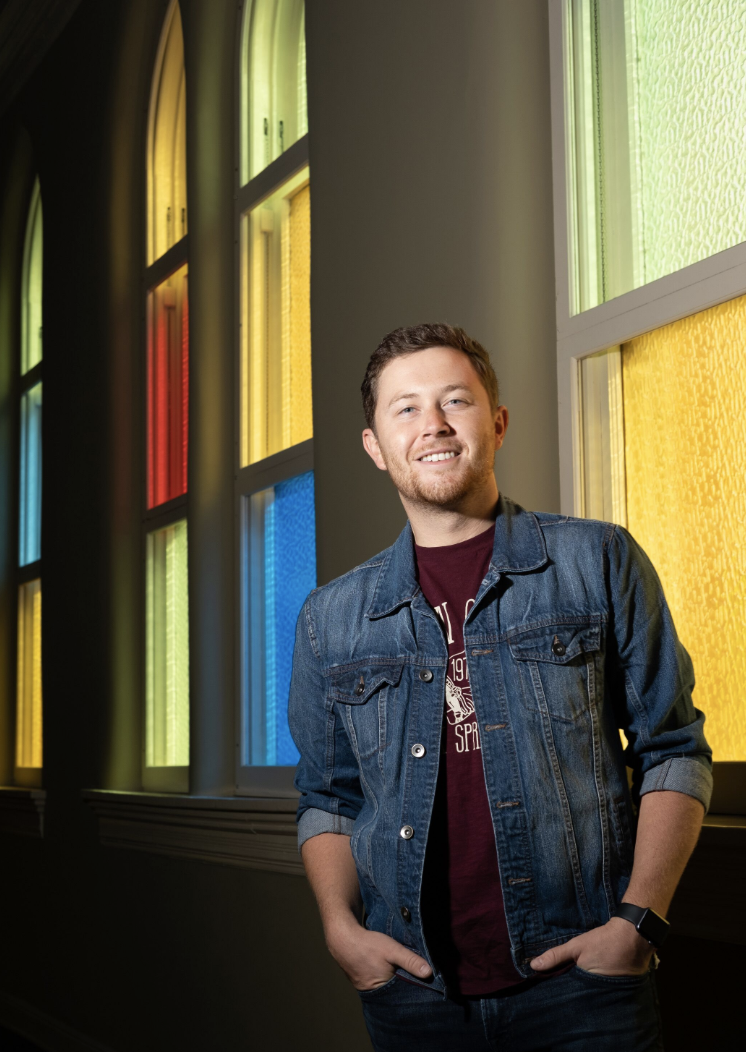 Fresh off two consecutive Platinum-certified No. 1 hits, the ACM, BMI and CMT Award-winning Scotty McCreery will perform at the historic Ryman Auditorium in Nashville, Tenn. on Wednesday, March 11, 2020.
This will be the Triple Tigers recording artist’s first concert at the
“Mother Church” in six years. Special guests for this show will be
singer/songwriter Heather Morgan and rising star Adam Doleac.

“When you play in Nashville, you’ve got to be on your A-Game, and when
you play the Ryman Auditorium, you have to give it everything you’ve
got,” said an excited McCreery. “I cannot wait to be back on that stage
where my heroes have performed. I’ve been looking forward to this for a
while now. We’re going to have a fun night.”

McCreery is currently in the Mediabase Top 40 and rising with his song “In Between,” the third single from his album Seasons Change. He co-wrote all 11 songs on the album, which debuted at No. 1 on the Billboard
Top Country Albums chart and achieved one of the strongest first weeks
for a country music album in the last year, moving over 40,000 albums in
the first week alone. The first single from the album was the
Platinum-certified No. 1 hit “Five More Minutes,” the touching tune
which People Magazine calls “an emotional walk down memory
lane” and which the professional songwriting membership of the Nashville
Songwriters Association International (NSAI) named one of the “Top 10
Songs We Wish We’d Written” in 2018. “This is It,” the album’s second
Platinum-certified single which spent two weeks at No. 1, was inspired
by the North Carolina native’s engagement to his high school sweetheart
(and now-wife) Gabi and has quickly become a wedding song standard.

McCreery will travel to Europe for the first time near the end of
October for two sold-out shows in London, England (Oct. 26 and 28) as
well as shows in Manchester, England (Oct. 27) and both Berlin and
Cologne, Germany (Oct. 23 and 24). When he returns stateside, the
singer/songwriter will be on tour with Old Dominion in November. The
grandson of two military veterans, McCreery will host the 2019
iHeartCountry “One Night for Our Military” Veteran’s Day radio special
in November, where he will also perform along with artists Jason Aldean
and Kelsea Ballerini.

McCreery achieved new heights this year, earning two back-to-back No. 1 hits from his current album Seasons Change, which debuted at No. 1 on the Billboard Country
Album chart: the RIAA Platinum-certified “Five More Minutes” and the
RIAA Platinum-certified “This is It,” which stayed at the top of the
charts for two weeks. He co-wrote all 11 songs on Seasons Change. All four of his albums have debuted at No. 1 on a Billboard Albums chart,
with current combined sales surpassing 3 million copies. He’s earned
five Platinum and one Gold singles; won the 10th season of “American
Idol” in 2011; was named the ACM New Artist of the Year in 2011; won the
CMT Music Award for Breakthrough Video of the Year (“The Trouble with
Girls”) in 2012; American Country Awards for New Artist of the Year in
2011 and Breakthrough Artist of the Year in 2013; BMI Awards for writing
One of the Top 50 Country Songs of the Year twice (in 2015 for “See You
Tonight” and in 2018 for “Five More Minutes”); a Carolina Beach Music
Award for National Dance/Shag Song of the Year (“Barefootin’”) in 2018;
and the NSAI Nashville Songwriter Award for One of the Top Ten Songs I
Wish I’d Written (“Five More Minutes”) in 2018. The North Carolina
native released his first book, Go Big or Go Home: The Journey Toward the Dream, in
2016. McCreery launched his recording career by making history in 2011
as both the first country artist and the youngest male artist of any
genre to debut his first studio album, the Platinum-certified Clear as Day, at No. 1 on the all-genre Billboard Top 200 Albums chart. For more information and his current tour schedule, visit  ScottyMcCreery.com.

A National Historic Landmark, Ryman Auditorium was built as a tabernacle
by Captain Thomas G. Ryman in 1892, served as the home of the Grand Ole
Opry from 1943-74 and was completely renovated in 1994. The Ryman is
open for tours during the day and at night offers a wide variety of
entertainment performances, just as it has for over 125 years. The venue
was voted the 2003, 2004, 2010, 2011, 2012, 2013, 2014, 2015, 2016,
2017 and 2018 Pollstar Theatre of the Year and recently took home its
sixth consecutive CMA Venue of the Year Award. Ryman Auditorium is owned
by Ryman Hospitality Properties, Inc. (NYSE: RHP), a Nashville-based
REIT that also owns and operates the Grand Ole Opry, Ole Red and 650 AM
WSM. For more information, visit ryman.com.