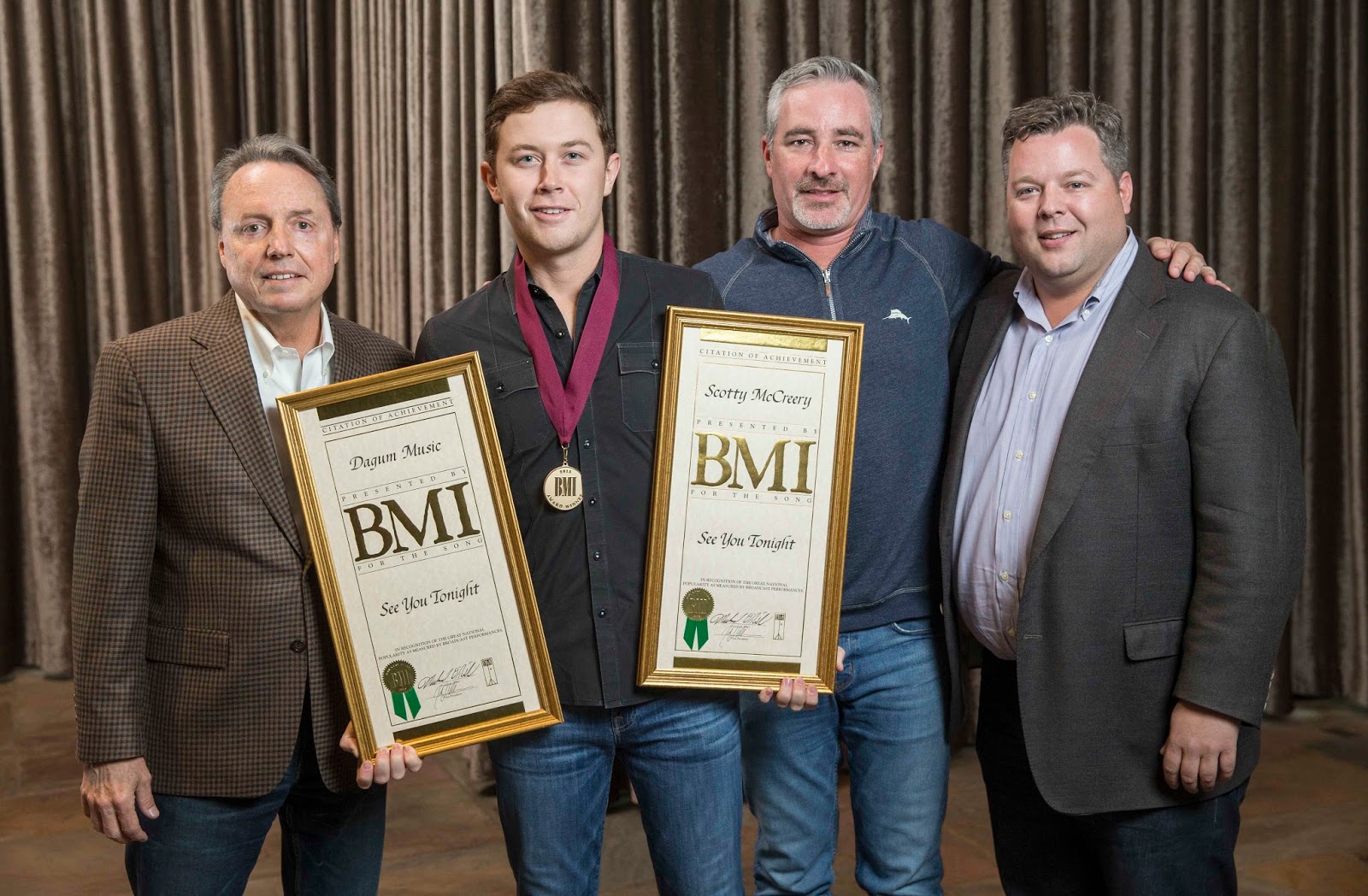 NASHVILLE,
TENN. – (Dec. 14, 2015) – After having to miss the BMI Country Music
Awards in November due to a prior commitment performing at the CMA
Marketing Summit, Scotty McCreery excitedly accepted his first BMI Award in person last Friday afternoon, Dec. 11, for writing one of BMI’s Top 50 Country Songs of 2015: his Platinum-selling Top Ten hit “See You Tonight.” BMI
announced its list of Top 50 songs in November at its annual event, but
with McCreery unavailable, he didn’t want to just “mail it in.”
McCreery wrote the song with Ashley Gorley and Zach Crowell, and it served as the title cut of his second studio album and earned him a Top 10 hit on both Billboard and MediaBase. The multi-Platinum-selling singer/songwriter received his award in person in Nashville from Jody Williams, BMI Vice President, Writer and Publisher Relations and Bradley Collins, BMI Executive Director, Writer-Relations.

“This is my first-ever award for songwriting, and to be acknowledged for
that is a huge honor for me,” said an excited McCreery. “I was so
disappointed that I couldn’t be there to accept it in person during the
BMI Awards in November. BMI graciously offered to send the award to my
home, but it was important to me that I come back to Nashville as soon
as I had a break in my tour schedule and thank Jody and Bradley in person
for their continued support and encouragement of me and my songwriting.
I’ve been writing songs since I was a boy playing my guitar in my
bedroom. I enjoy the entire process and have spent a lot of time in
Nashville over the last few years honing my craft and learning from some
amazing talents. Receiving this recognition is a wonderful way to end
my year.”

“We are so proud to have Scotty McCreery as a BMI songwriter and are
very pleased to present him with his first, of many I am sure, BMI
Country Award for ‘See You Tonight’,” said Williams.  “I cannot wait to
see what Scotty does next.”

NASH Country Weekly Magazine’s “Country Music’s Sexiest Man
2015” has been busy throughout this year touring during the summer and
fall as the special guest on the Rascal Flatts RIOT 2015 Tour as well as
performing at theaters on his own. In-between concerts he has been
writing songs and recording his next album, which is expected to be in
stores in 2016 with “Southern Belle”
serving as the first single from the forthcoming release.  The ACM and
CMT Award winner has also been busy writing his first book, Go Big or Go Home: The Journey Toward the Dream, which will be in-stores on May 3, 2016 and is available now for pre-sale orders at Amazon.com, Barnes & Noble, and wherever books are sold.

McCreery burst onto the national music scene in 2011 at age 17, quickly
establishing himself as one of country music’s hottest new stars. Now
just five years later, the talented singer/songwriter has sold more than
2.5 million albums and received both Platinum and Gold album
certifications, debuted three consecutive albums at No. 1 on a Billboard chart,
achieved one Gold and three Platinum-certified singles and two Top Ten
hits, amassed more than three million followers on Facebook and Twitter,
and received more than 150 million YouTube views.