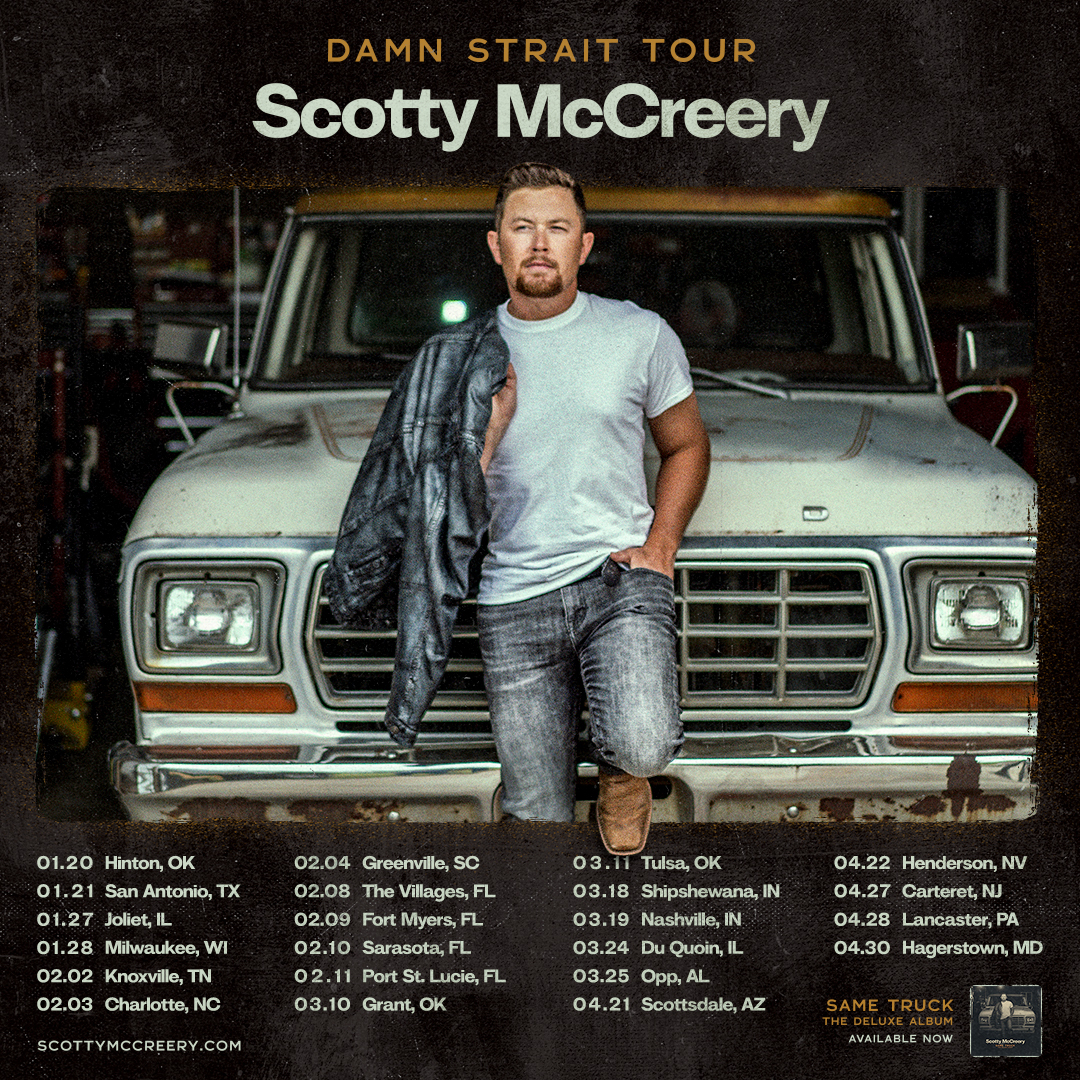 Current Single “It Matters To Her” from Same Truck: The Deluxe Album Continues Climbing the Charts

Following the release of Same Truck: The Deluxe Album, Triple Tigers recording artist Scotty McCreery announces his Damn Strait Tour, boasting over 20 dates in 2023 through the end of April. The fan club presale will be available tomorrow, Dec. 13 at 10 a.m. local time, followed by the general on sale this Friday, Dec. 16 at 10 a.m. local time.
“Looking forward to hitting the road in 2023 with the Damn Strait Tour,” said McCreery. “I’ve enjoyed my time at home learning to be a Dad to Avery, but I’ve missed being onstage with the band and performing for the fans. Can’t wait to see everyone in the new year!”

The namesake of the tour and McCreery’s fifth consecutive chart-topper, RIAA Gold-certified “Damn Strait” (which stayed at No.1 for three weeks), also landed at No. 4 on the Billboard Year End Country Airplay chart along with being named among Billboard’s “10 Best Country Songs of 2022,” sharing the single marked “one of the biggest chart hits of McCreery’s 11-year career,” while praising, “McCreery has become known for letting fans follow his life through songs like ‘This Is It’ and ‘Five More Minutes,’ but he’s also shown he has an ear for a great outside song, like this cut from Jim Collins and Trent Tomlinson.”

Current single “It Matters To Her” continues climbing, reaching No. 32 on this week’s Mediabase chart. He recently premiered the official music video, offering some behind-the-scenes footage as he and wife Gabi prepared for the arrival of their son Merrick Avery. “To me, the video shows off how much of a rock star Gabi was during her pregnancy,” McCreery shared with PEOPLE. “It also captures how much we both enjoyed getting ready for Avery’s arrival.” Both songs are available on Same Truck: The Deluxe Album.

McCreery, who was just ranked No. 13 on the Top 50 list of 2022 Country Airplay Artists by Billboard, was a co-writer on all but four of the 18 tracks, Same Truck: The Deluxe Album, which is available now on vinyl, CD and digital formats, and was produced by Frank Rogers, Derek Wells and Aaron Eshuis. The project showcases McCreery’s lauded songwriting skills with six new songs, including “On It,” reconnecting McCreery with “In Between” co-writers Jessi Alexander, Jonathan Singleton and Rogers, which was one of three consecutive No. 1 singles from his RIAA Gold-certified album Seasons Change. Celebrated by Billboard as a continuation of “his winning arc of songs pulled from chapters of his own life,” “Small Town Story” finds McCreery joined by his 2013 Platinum-certified Top 10 smash “See You Tonight” co-writers Ashley Gorley and Zach Crowell.

As the North Carolina native looks forward to his first Christmas as a dad to Avery, McCreery has been celebrating the holidays as a performer on “CMA Country Christmas,” streaming now on Hulu and Disney+ and re-airing on ABC on December 13, while CMT shared a rocking performance of Elvis Presley’s “Santa Claus is Back in Town” from McCreery’s “Campfire Sessions.” Earlier this month, he was the spotlight artist for a sold-out Opry Country Christmas show in Nashville.

Additionally, Hallmark Movies & Mysteries will premiere Five More Minutes: Moments Like These on Dec. 17 at 10 p.m. ET/PT. It is the second film inspired by his 2018 Double-Platinum certified No. 1 hit “Five More Minutes” and stars Ashley Williams and Lucas Bryan. The movie is not a sequel to last year’s Five More Minutes but has a brand-new storyline. McCreery once again serves as an Executive Producer, but he does not appear in the movie, as it was filmed during the last month of wife Gabi’s pregnancy.

McCreery is gearing up to close out another landmark year with four remaining shows in 2022, including three acoustic co-headlining shows with Lee Brice. Both artists will be on stage for the entire concert, and they will trade off songs with each other, providing a more intimate concert experience than usual.