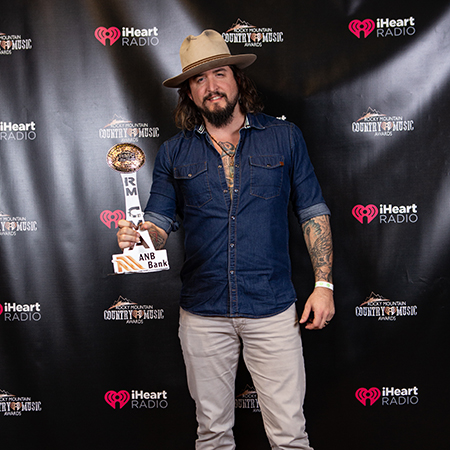 Scooter Brown was awarded Male Vocalist of the Year at the 3rd Annual Rocky Mountain Country Music Awards
presented by iHeartRadio on January 13 at the Union Colony Civic Center
in Greeley, Colo. The awards celebrate the best in country music from
2018 in the Rocky Mountain region (including Colorado, Wyoming,
Nebraska, Kansas, South Dakota, Utah and New Mexico). Scooter Brown
Band’s “American Son” featuring Charlie Daniels was also nominated for
Song of the Year. The award comes following his appearance on USA
Network’s Real Country and the band’s release of their acclaimed album American Son.

“I am
truly honored to have been nominated for both awards and blown away at
winning the ‘Male Vocalist Of The Year’ award. I’m looking forward to
spending a lot more time in the Rocky Mountain region to help expand an
already great and growing music scene there,” said Scooter Brown.

In
November, Brown was featured on USA Network’s “Real Country” where he
competed on Travis Tritt’s team and came in second on his episode.
Scooter Brown Band is already headed back out on tour in 2019 with a
midwest run already in the books. You can keep up with all of the band’s
tour dates at scooterbrownband.com.

After
four years and three months, two tours overseas with one tour of combat
in Iraq as a United States Marine, Scott Brown traded his guns in for
guitars and hit the road. Scooter Brown Band was
formed in 2005 and played mainly in and around Houston, Texas. It
wasn’t until 2009 with the release of their first studio album, Between Hell & Texas, that they gained a notable presence in the Texas music scene. In 2010, Scooter Brown Band put out the album Live at Big Texas. In 2013, they followed up with their next studio album, Valor, and a self-titled album, Scooter Brown Band,
in 2015. The band has toured the U.S., headlining shows and opening for
some of the biggest names in the business including Charlie Daniels
Band, Travis Tritt, Lee Roy Parnell and the Marshall Tucker Band, just
to name a few. With two of the members being prior military, the band
spends a lot of time doing work for Veteran Support Organizations like
Base Camp 40 – Warriors in the Wild, Lone Survivor Foundation, and the
Chris Kyle Frog Foundation. Defined as modern southern rock, the band
released American Son in August 2017 and was named by Rolling Stone as a country “Artist to Watch” in December 2017. For more information, visit www.scooterbrownband.com.