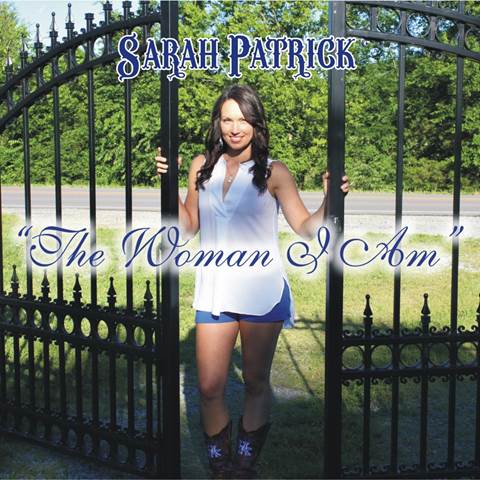 Sarah Patrick to release THE WOMAN I AM June 15

Nashville,
TENN — The reported demise of traditional country music may well have been premature. Artists like Sturgill Simpson, Kacey Musgraves, and Chris Stapleton have proven that the music is not only alive and well, but
fans are eagerly embracing the sound.

Now, comes Kentucky singer/songwriter,Sarah Patrick. She plays guitar and is most comfortable in a t-shirt and
jeans. She loves the music of Loretta Lynnand Lynyrd Skynyrd. Sarah Patrick doesn’t just act country … she is country. And now, she is poised to release her debut album on Nashville America Records (NAR).

The title cut, “The Woman I Am,” written by country music  legend, David Frizzell, has already been released to radio, and the album will be available on Friday, June 15, 2018. A 2nd single is planned for release that day.

“Sarah reminded me of Loretta from the start,” Frizzell says. “She has that same honesty and determination mixed with vulnerability.”

With some of Nashville’s top session players, and Frizzell in the producer’s chair, Sarah began working on her debut NAR album in late 2017. The project includes timeless covers and three of Sarah’s own original songs.

“I just feel so grateful and blessed,” Sarah says. “This has been the most amazing experience and I’m just so eager to share this music and see where the journey takes me. I love traditional country music and I hope everyone enjoys this album, but I have to
say, there’s a lot here for the girls!” Indeed, The Woman I Am is replete with songs full of love and heartbreak, attitude and empowerment.

Raised in a tightknit family with loving parents and one older brother, Sarah discovered the music of artists like Loretta Lynn, Miranda Lambert, Ashton Shepherd, Patty Loveless,
Reba McEntire, Trisha Yearwood, and Tammy Wynette as a young girl. These women’s songs became the soundtrack of her life; the place to which Sarah would turn in times of joy, celebration, through new love and breakups, finding jobs and leaving jobs, becoming
a mother and more. Eventually, she began to write songs of her own, and ultimately began performing at local venues, sharing both covers and original songs.

Sarah began sharing videos online, and was soon invited to perform at a club near her home. Although she’d never been onstage, Sarah felt right at home. Over time, she began
to add her original songs to the list of classic covers in her sets. When she’s not writing, performing, or searching for a quiet corner of the house to record a song to share on social media, Sarah loves to fish, play basketball, read (autobiographies are
her favorite), and more than anything, simply hang out and play with her two young daughters.

Sarah has been performing regularly in her home state of Kentucky, and touring with Frizzell. She will appear at the inaugural LeftyFest Music Festival
in Corsicana, Texas on June 16, sharing the bill with Frizzell, Lacy J Dalton, Paulette Carlson (of the band Highway 101), Marty Haggard, Allen Frizzell and Aaron Copeland. The festival honors the enduring musical legacy of Lefty Frizzell.

The Woman I Am

In A Woman’s Way

I Ain’t No Angel

He Loved Me He Loves Me Not

I Won’t Be Your Trophy

You Ain’t Woman Enough (To Take My Man)

I Wish That I Could Hurt That Way Again

Give A Little More Love