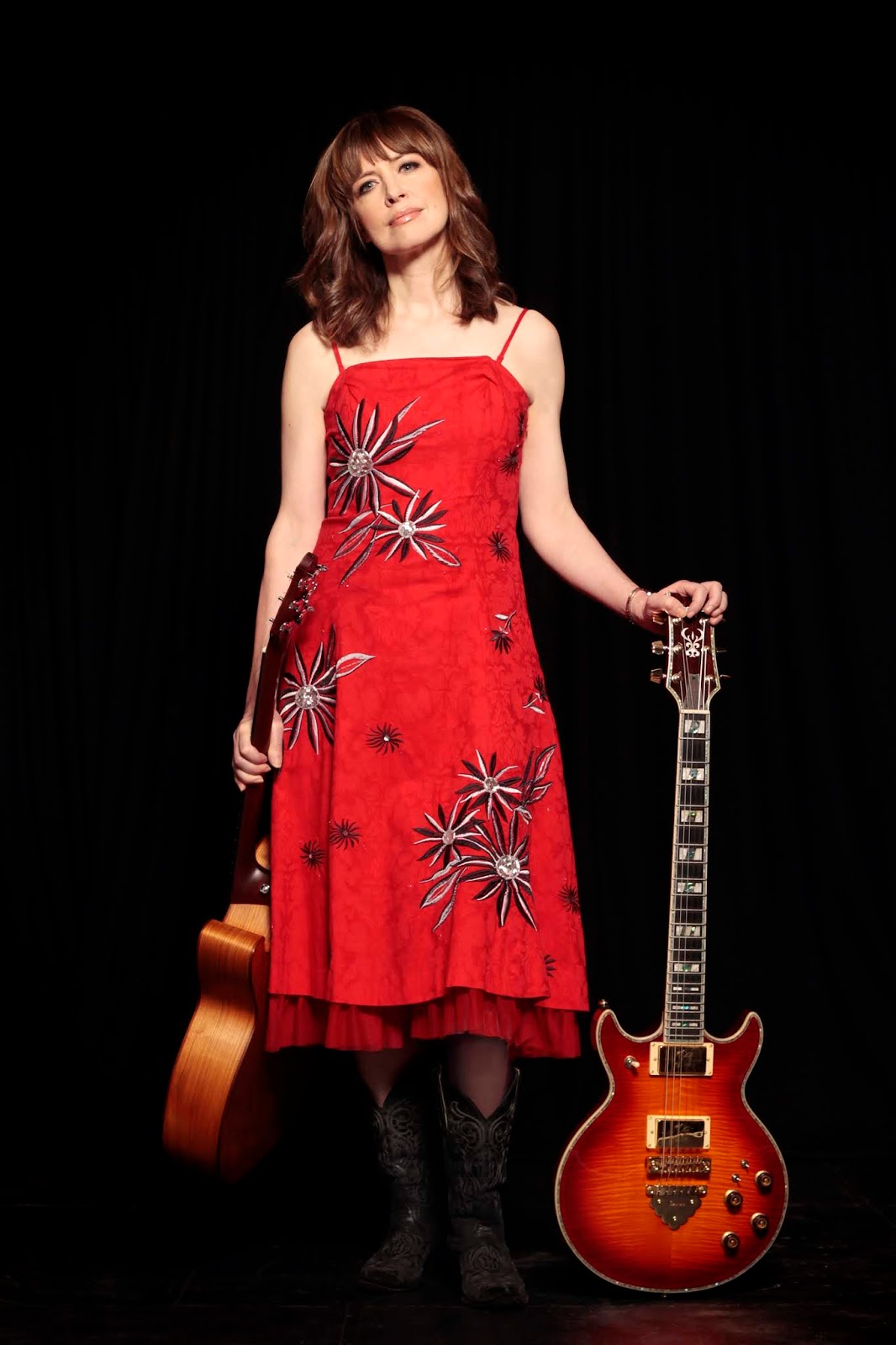 1. Lamitschka:
Music has many new fans throughout Europe who may be hearing about you for the
first time. How would you describe yourself and the music you play to someone
who has never seen or heard you?

Answer:  Wildly
eclectic both personally and musically! I was born in Spain to a Spanish father
and an American mother, raised in Chicago, lived for a long time in Ireland
which is where my husband is from and where my children were born, and have now
been living in England for the past 11 years, so it’s difficult for me to say
where I’m “from”, and my music has a similarly wide range of influences, so
it’s difficult to categorize. Over five solo albums, I’ve moved from being
primarily a folk musician to mostly writing my own songs, and from only playing
acoustic guitar to also playing electric guitar, drums and piano, and I’d like
to think that my music and my songwriting will continue to evolve and branch
out into different areas as time goes on.

2. Lamitschka:
How was the last year for you? What were your highlights?

Answer:  It’s
been a very busy year, starting with the release of my new album in January. I
did a three-week UK tour to launch the new album in January and February, and
that was the first tour I’d ever done with all the new instruments mentioned
above – I’d never played electric guitar, drum or piano in public before
January of this year, so that was exciting and daunting. Then I did a four-week
tour of the Netherlands and Germany in February and March, a five-week tour of
the UK and Ireland in April and May, and right now I’m partway through a
seven-week tour of the USA (coast to coast!) which will be followed in November
and December with a five-week UK tour. By the end of this year I’ll have played
127 concerts in 12 months.

3. Lamitschka:
What is your latest CD and how’s it doing?

Answer:  It’sIf We Dig Any
Deeper It Could Get Dangerous,
and it was produced by the great Michael Chapman, who also guests on the album.
It was such an honour to be able to work with him, and while all my albums have
been critically well received, I think this one is a big step forward for me.
It’s had some incredible reviews, and a bunch of reviewers in various different
countries described it as an early candidate for album of the year, a highlight
of the year so far, and so forth. It’s also the first album I’ve ever released
on vinyl LP as well as CD, which I’m very excited about. I love hearing it on
vinyl – there’s definitely something special about it.

4. Lamitschka:
How did you choose the title for the CD?  Is there a story behind the
name?

Answer:  The
album title is something I heard myself saying to my son when he was digging a
huge hole in our back garden – I couldn’t actually see him until I stood right
at the edge of the hole, and there he was, down there, still digging, and I
said “Eli, if we dig any deeper it could get dangerous” and immediately thought
‘There’s a song!’ I love the way it suggests all sorts of different levels of
metaphorical meaning, and I try to explore a few of those in the lyrics of the
song.

5. Lamitschka:
Do you write the songs yourself? If not, how do you go about finding the songs
for your CD?

Answer:  I wrote
nearly all the songs myself, except for ‘Time To Love’ which I co-wrote with
Gerry O’Beirne, ‘Forever Autumn’ which was written by Jeff Wayne, Gary Osborne
and Paul Vigrass, and ‘Dies Irae’ which is a medieval chant. Gerry produced my
first three albums, and while after three albums together we both felt it was
time for me to work with some different producers, I wanted to have some
continuity with what had gone before, so I asked Gerry to co-write songs with
me for both the fourth and fifth albums. The only difficulty was that he lives
in Ireland and I live in England, so for both albums we had to co-write the
songs via email! I decided to cover ‘Forever Autumn’ after going to see Jeff
Wayne’s ‘The War of the Worlds’ at a stadium in Manchester – it was actually my
manager who suggested I try playing it on the guitar, and it worked so
beautifully that I started playing it in my live set straightaway. It seemed to
fit really well thematically with the other material in the album, and then I
found out that the melodic theme in the intro and outro to ‘Forever Autumn’
came from the ‘Dies Irae’, so when I then discovered that the Latin words of
the ‘Dies Irae’ describe a lot of the apocalyptic imagery that I’d used in my
lyrics for the title track, it seemed like a sign that I should record that as
well.

6. Lamitschka:
You did a duet with Dean Friedman. How did that happen to come about?

Answer:  That was
hilarious, and I’m so glad that it’s been recorded for posterity on YouTube!
What happened was that Dean Friedman was coming to Penzance, where I live, to
perform at a local arts centre called the Acorn. The Acorn people asked me if I
could put Dean up for the night, so I said yes of course, and then I got an
email from Dean saying that he didn’t need a place to stay after all, but he
wondered if I’d like to duet with him on his song “Lucky Stars” at the concert.
For those of your readers who don’t know this already, Dean originally recorded
“Lucky Stars” as a duet with a singer called Denise Marsa, and was a massive
hit in the late 70s, particularly in the UK where it went to No. 3 in the pop
chart. It wasn’t quite as big in the USA, where I grew up, but another of his
songs from the same period, “Ariel”, was huge, and I can remember one summer
when it was constantly on the radio, so it was a big thrill to be invited to
perform with him. The director of the Acorn filmed the song from the balcony
and it’s still up on YouTube, so do check it out if you get the chance!

7. Lamitschka:
How do you feel about winning the Lifetime Achievement Award at the Ards
International Guitar Festival last year?  What has it done for your
career?

Answer:  That was
a total shock. I’d just left the stage after playing the final song in my set
at the festival, and the crowd was calling for an encore, so I was just about
to walk back onstage when the MC came out with the festival director and they
announced that they were about to present the festival’s annual Lifetime
Achievement Award. All I could think was “Oh rats, they’re going to bring out
some famous guitarist now to accept this award and I’m not going to get to do
my encore.” Then I heard them talking about how in the 20 years of the award’s
history they’d never given it to a female guitarist and it was high time that
changed, and I started thinking, “Ok, who are the other female guitarists
playing at this festival?” It was only when they started talking about the
DADGAD tuning (which is the tuning I use all the time and wrote a book about)
that the penny dropped and I realised that they were actually giving the award
to me. It was such an incredible honour to follow in the footsteps of so many
of my musical heroes – previous recipients of the award include Davey Graham,
John Renbourn, John Martyn, Arty McGlynn, Martin Simpson, Gordon Giltrap,
Pierre Bensusan and Martin Carthy. I’d like to have thought that I have a good
bit more life ahead of me before we start talking about ‘lifetime achievement’,
but it’s okay, I’ll take it! I think it has made a difference to my career in
that people are more ready to take me seriously as a guitarist – it’s a form of
validation, a solid achievement that people can recognise.

8. Lamitschka:
As an artist, you so many tasks such as recording, touring, interviews. What do
you like best, what’s your favorite activity?

Answer:  More
than anything else I love performing live – that’s basically the reason I do
what I do. I wish I were the kind of musician who practices four hours a day
whether or not there’s a gig coming up, but the reality is that I’m not. I need
the pressure of an upcoming tour to give me the incentive to put the hours in
to make sure I give the audience the best show I can possibly give them,
because that’s what drives me. I think that especially for solo performers,
every show is like walking a tightrope, and I really thrive on that adrenaline
rush – every night when you walk out on stage, you’ve got a whole new
relationship to build with a whole new group of people, and when I can do that
and really succeed at it and feel like between me and the crowd some kind of
magical energy has been created, that’s an incredible feeling – there’s nothing
else like it. A close second to that is my love of writing music, creating
something new – it’s an exhausting thing to do, and it’s terrifying, because as
soon as you write a song that you know is a really good song, you’re
immediately afraid that you’re never ever again going to be able to write a
song as good as that. But I do love it.

9. Lamitschka:
Is there any place you haven’t played that you would like to?

Answer:  Over the
past few years I’ve been touring very regularly in the UK, Ireland, USA,
Netherlands and Germany, with occasional forays into Belgium and Switzerland; I
also did a couple of shows in Spain. But there are lots of countries I’ve never
played that I’d love to get to. I find it weird that I’ve never gigged in
France even though I studied in France for a year as a teenager and speak
fluent French; I’d also love to do a tour in Italy, and more gigs in Spain. I’d
love to go to Canada – I’m hoping that I can actually make that happen in the
next year or two – and Australia and New Zealand.

10. Lamitschka:
Many music fans today get their information about artists online. Do you have
your own website and what will fans find there?

Answer: Yes, I
was very lucky that the sarahmcquaid.com domain name was still available when I
first set up a website, so that’s the address and there are links there to all
my social media pages on Facebook, Instagram, Twitter, as well as my pages on
YouTube and Spotify. All my albums are available to stream on my website in
their entirety on the Listen & Buy page, and there’s loads of live concert
video on the Video page, plus recordings of a bunch of radio interviews and
live sessions I’ve done on the Radio page, so people can get a pretty thorough
idea of what they’re going to be hearing if they’re thinking about going to one
of my gigs! If they do decide they want to see and hear me live, all my tour
dates are listed on the Tour page, and there’s also a Guestbook if people want
to make a comment or ask me a question. And there’s a Press page where they can
read reviews and interviews like this one – thank you so much for doing it!
It’s been a pleasure chatting with you.