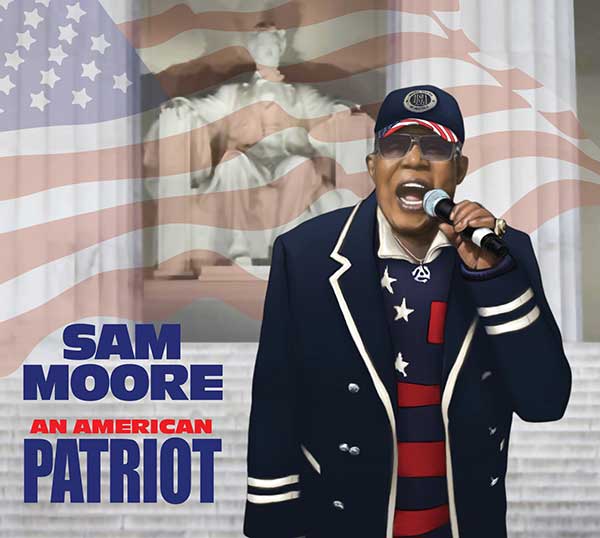 NASHVILLE, Tenn. – The Legendary Soul Man™ has released his newest album Sam Moore: An American Patriot available for download on iTunes today. CDs will be available in-store, as well as on Amazon, Apple Music, and other outlets on October 6.

The album was inspired by Moore’s own performance of “America the
Beautiful” on the steps of the Lincoln Memorial, where his dear friend
and inspiration Dr. Martin Luther King, Jr. stood 53 years earlier
delivering his famous “I Have a Dream” speech. Moore believes that
music, the universal language that knows no boundary or color, was the
best way for him to take a stand and make an impact in helping to bring
the country he loves back together.

Enlisting the skills of renowned producer Rudy Perez, a Cuban refugee, who, with Moore has crafted An American Patriot
with the goal of recording versions of iconic American anthems like
they’ve never been done before. In Moore’s recognizably unique style, he
has recorded classics such as “Battle Hymn of the Republic,” Lee
Greenwood’s “God Bless the U.S.A.,” and Marvin Gaye’s “What’s Going On.”
In addition to the traditional songs, the album also features new songs
such as “Show For You,” the 2017 Department of Defense Warrior Games
anthem, “Peace Please,” and “Land of the Free.” It is with the hope of
rekindling love of country and each other that Sam Moore: An American Patriot is offered.

2. The Battle Hymn of the Republic

Moore, the Grammy-award winning, Rock & Roll Hall of Famer, is credited by Bruce Springsteen
as being one of the “great masters of momentum” when it comes to his
showmanship, has performed for all six living presidents, including Jimmy Carter, George H. W. Bush, Bill Clinton, George W. Bush, and Barack Obama. Most recently, Moore performed “America the Beautiful” on Fox & Friends in New York City and at Royal Albert Hall in London with other Stax originals as part of BBC’s Late Night Prom, The Sound of Soul: Stax Records in celebration of the 50th anniversary of the 1967 Stax/Volt Revue’s groundbreaking tour of the UK and Europe.

Sam Moore catapulted to international fame as the lead voice of the
1960s powerhouse duo “Sam & Dave,” a musical collaboration with
long-time partner and fellow Georgia native Dave Prater. The duo
recorded and performed together for 20 years, but it was the 1967’s hit
“Soul Man,” that found them lasting fame, defined a genre, and altered
the course of music history. Their signature sound influenced a diverse
array of musical talents, including Al Green, Michael Jackson, Lionel
Richie, Tom Petty, Phil Collins, Elvis Costello, Billy Joel and so many
others. Sam & Dave’s music and personas inspired the film The Blues Brothers,
and other hits like “Hold On I’m Coming” have appeared on the
soundtracks of more than a dozen films. After a storied career with
Prater, Moore has spent the past 35 years enjoying a long solo career,
recording with some of the biggest names in numerous genres of music,
including Conway Twitty, with whom he recorded the hit song “Rainy Night
in Georgia.” In 1992, Moore was inducted into the Rock & Roll Hall
of Fame, capping a career that includes a Grammy, and honors from the
Vocal Music Hall of Fame, the Grammy Hall of Fame, and the Rhythm and
Blues Foundation. Moore was the recipient of the first ever MOBO Living
Legends Honor, and he received the NARAS Hero Award in 2003 and an AFTRA
AMEE Lifetime Achievement Award in 2010. Moore, who turns 82 on October
12, continues to record and perform to critical acclaim as a solo
artist. He is celebrating the 50th anniversary of his Grammy
award-winning song “Soul Man” this year and recently accepted a position
as Artist in Residence at Florida International University as part of
the College of Arts, Sciences & Education Humanities Project.