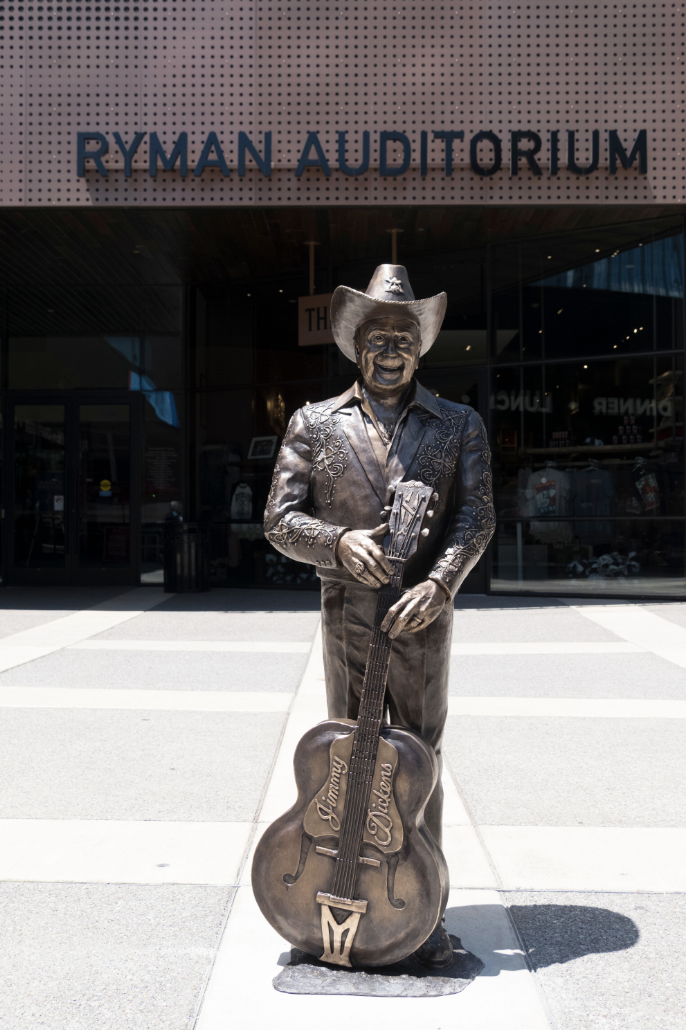 Ryman Auditorium announced exciting plans this week for its new Icon Walk,
a permanent outdoor exhibition on the historic venue’s grounds. The
Icon Walk will feature a collection of detailed bronze likenesses
honoring those who have made significant contributions to the historic
venue and Music City. The announcement came during CMA Fest as part of a
special matinee Opry show at the Ryman.

As the Icon Walk takes shape, new bronze statues of beloved music
legends will join existing monuments to Little Jimmy Dickens and Bill
Monroe, two of the most profound musical innovators in country and
bluegrass music. Both statues were unveiled in 2017 as part of the
Ryman’s 125 anniversary celebration.

The Ryman team will collaborate again with artist Ben Watts, the talent
behind the current Dickens and Monroe statues. The next artists to be
honored will be announced in early 2020.

“Thousands of people stop to pay homage to Monroe or pose for selfies
with Little Jimmy Dickens in front of the auditorium every year, and we
love seeing that,” said Ryman General Manager, Gary Levy. “As we add
more stars and legends to the Icon Walk, we’ll create more opportunities
to tell the story of the Ryman, Nashville, and the legends who have
graced our stage.”

Today, visitors can find country music’s Little Jimmy Dickens standing
atop the Ryman’s main steps facing Fourth Avenue, greeting each and
every ticket holder and tour-taker as they arrive. Bill Monroe, the
Father of Bluegrass Music, stands at the corner of the northwest corner
of the building near the venue’s driveway on Fifth Avenue. Monroe’s
likeness is flanked by a Tennessee Historical Commission marker
describing the night Bluegrass Music took the stage at the Ryman for the
first time in 1945.

The Ryman, affectionately known as the Mother Church of Country Music,
was founded as a beacon of hope for the faithful in 1892. The venue has
become an international symbol of cultural significance drawing millions
of people to Nashville to find their own inspiration from the wooden
pews.

The iconic brick building, which is on the national registry of historic
places, rose to prominence first as Nashville’s largest venue for civic
gatherings and later for attracting national touring shows including
the biggest names in music, theater, and entertainment including
Katharine Hepburn, Harry Houdini, Bob Hope, the Ziegfeld Follies, and
countless others including President Theodore Roosevelt.

The Ryman became the home of the Grand Ole Opry in 1943, and the world
of broadcast entertainment changed forever as the live radio and TV show
brought the likes of Roy Acuff, Johnny Cash, Patsy Cline, Minnie Pearl,
Marty Robbins, and Hank Williams to the stage and into living rooms
around the country. The program’s 31-year tenure at the Ryman ignited
the growth of country music.

Dickens and Monroe were instrumental to that burgeoning popularity, and
forthcoming statues will pay homage to others who helped to shape
country music’s past, present, and future.

A National Historic Landmark, Ryman Auditorium was built as a tabernacle
by Captain Thomas G. Ryman in 1892, served as the home of the Grand Ole
Opry from 1943-74 and was completely renovated in 1994. The Ryman is
open for tours during the day and at night offers a wide variety of
entertainment performances, just as it has for over 125 years. The venue
was voted the 2003, 2004, 2010, 2011, 2012, 2013, 2014, 2015, 2016,
2017 and 2018 Pollstar Theatre of the Year and recently took home its
sixth consecutive CMA Venue of the Year Award as well as a sixth ACM
Award for Venue of the Year. Ryman Auditorium is owned by Ryman
Hospitality Properties, Inc. (NYSE: RHP), a Nashville-based REIT that
also owns and operates the Grand Ole Opry, Ole Red and 650 AM WSM. For
more information, visit ryman.com.