RYAN WEAVER PRESENTS THE JOURNEY HOME PROJECT WITH A $5,000 CHECK 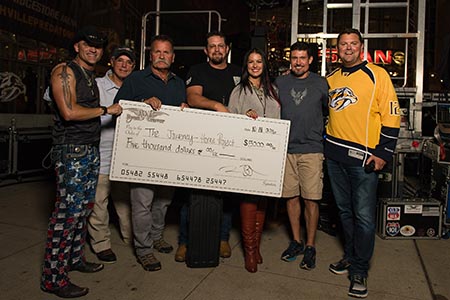 RYAN WEAVER PRESENTS THE JOURNEY
HOME PROJECT WITH A $5,000 CHECK

NASHVILLE, Tenn. (October 19, 2016)
– The Journey Home Project accepted a check from country artist and
veteran United States Army Blackhawk Helicopter Pilot, Ryan Weaver, at
an event launching his new music video on Tuesday evening. Accompanied
by a concert and After Glow party, Weaver gave back to the non-profit
that, he says, has helped him in indescribable ways. The new video in
support of his single, “Burn,” was premiered at the Bridgestone Arena
Plaza to a crowd of patriotic fans and featured Benghazi Heroes depicted
in the movie “13 Hours” John “Tig” Tiegen and Kris “Tanto” Paronto.
SiriusXM’s Storme Warren hosted the event.

“The Journey Home Project has helped me fulfill many of my dreams and
given a boost to my ultimate dream; a career in music,” Weaver said.
“Without a doubt, the board of this amazing organization has done
amazing things in the lives of many veterans from all lines of duty, I
am just proud and honored to be able to give back to those who have
given so much to me. I was so honored to have Tig, Tanto and the board
of The Journey Home Project here to celebrate with me and premiere the
video for “Burn.””

The money was raised from a VIP After Party held Tuesday evening at
Whiskey Bent Saloon as well as a campaign to raise money for Weaver, an
independent artist, to record the song “Burn” among others. The event
allowed attendees to get to know Weaver, Tiegen and Paronto and enter
for a chance to win a custom Brothers and Arms AR-15 and a personally
autographed golden fiddle by Charlie Daniels, who is a co-founder of The
Journey Home Project.

“On behalf of the entire board of The Journey Home Project, we wish
to thank Ryan Weaver for his countless efforts to support our
organization. He served our country proudly as a Blackhawk Helicopter
Pilot, Chief Warrant Officer 3, in the United States Army and continues
to do so as a civilian everyday, leading by example,” said Mercedez
Longever, co-founder of The Journey Home Project.

As a result of funds raised through Daniels’ 40th Anniversary Volunteer Jam
at the Bridgestone Arena last year, The Journey Home Project has been
able to donate funds to help with the completion of the state-of-the-art
Veterans and Military Families Center
on campus at Middle Tennessee State University (MTSU), among various
other fundraising events for veterans. This year’s Volunteer Jam on
November 30 will bring Kid Rock, Chris Stapleton, Luke Bryan, 3 Doors Down, Larry the Cable Guy, Travis Tritt, and more to the Bridgestone Arena stage to celebrate Charlie Daniels’ 80th Birthday. Tickets to this event can be purchased here.