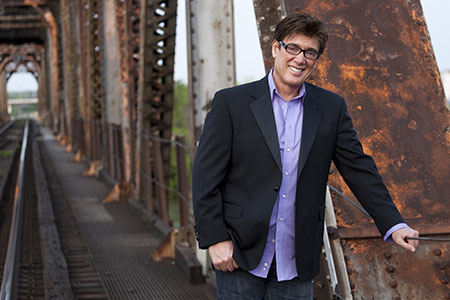 NASHVILLE, Tenn. (June 2, 2016)
– In a recent episode of “Tennessee Crossroads,” legendary country
musician Ronnie McDowell explained the stories behind his prolific
creative passions, and details a lesser known hobby that has people
talking – painting. Click here to watch Ronnie’s segment and learn how his artwork fits into the bigger picture.

McDowell, known best across the country for his hit tracks like
“Older Women” and “It’s Only Make Believe,” is currently touring in
support of his latest venture – his autobiography entitled “Bringing It
To You Personally,” which tells the incredible true stories of his
career, including the life-changing moment he dazzled the world with his
heartfelt and self-penned tribute song, “The King Is Gone,” in honor of
Elvis Presley’s death. But when he’s not performing for his legion of
fans, he’s busy creating works of art for them.

“The creative forces all intertwine – the songwriting, the art, the
singing, the entertaining. To me, they all kind of just play together,”
McDowell said.

Since his early years, Ronnie has always had an affinity and talent
for painting. Over the years, he has amassed a number of fans solely for
his artistic sensibilities, and continues to split his time creating
new works of art. In fact, his work has grown so popular that, in 2015,
it attracted the attention of a particularly magical organization.
Ronnie then signed a 5-year contract to create works of art for iconic
Disney characters.

For more information on Ronnie’s book, which includes more than 100
photos and personal stories about his friendships with everyone from
George Jones to tourmate Conway Twitty, visit ronniemcdowellbook.com. Follow Ronnie McDowell on Facebook and Twitter.

ABOUT RONNIE MCDOWELL:
Following the death of Elvis Presley in 1977, Ronnie McDowell came
out of nowhere to dazzle the world with his heartfelt and self-penned
tribute song “The King Is Gone” on the independent Scorpion label. The
record took off immediately, gaining airplay on country and pop stations
across the country and around the world. To date, “The King Is Gone”
has sold more than five million. McDowell charted more than thirty Top
40 hits on the Billboard country music charts. Two of his
singles, “Older Women” and “You’re Gonna Ruin My Bad Reputation,”
reached No. 1 on the country charts, while eleven more reached Top Ten.
He has also released more than twenty studio albums. McDowell also
achieved notoriety when he sang 36 songs on the soundtrack “Elvis,” the
Dick Clark-produced television movie that featured Kurt Russell as the
performer. He also was the singing voice for the television movie “Elvis
And Me”, the ABC television series about the early years of Elvis’
career titled simply “Elvis” as well as, the 1997 Showtime special
“Elvis Meets Nixon.” While Elvis Presley has played a big part in Ronnie
McDowell’s musical career over the years, Ronnie continues to entertain
audiences with his own blend of romantic intimacy and country
excitement.