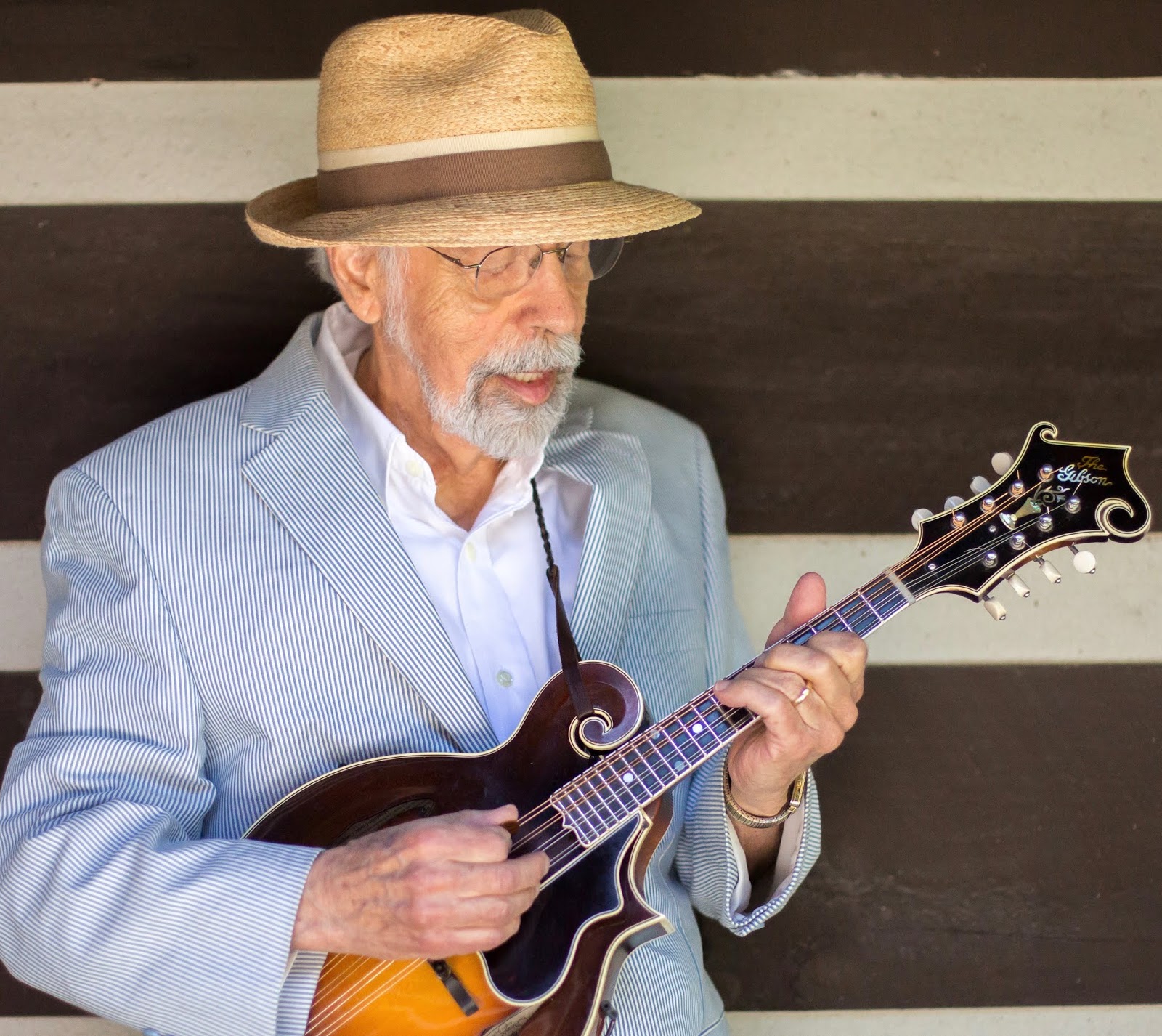 Answer:  Fantastic! I was inducted into the IBMA Bluegrass Hall of Fame
last fall. It was just wonderful to be honored by my peers in that way. And
another wonderful thing was this summer’s Camp Bluegrass at Levelland, Texas,
where they featured the music and history of the Kentucky Colonels, and
convened a band of Kentucky Colonels-connected musicians to make a tribute band,
with me and Roger Bush, an original Kentucky Colonel. And then Mountain Home
Records convened a who’s who of young bluegrass stars to make a new album with
me! The City of Nashville even honored me with a special proclamation in the
city council! It’s been a great year.

Answer:  The latest is about to be
released October 26 on Mountain Home Records. It’s Roland White and Friends: A
Tribute to the Kentucky Colonels, produced by Jon Weisberger and Ty Gilpin. As
I mentioned, they brought in a who’s who of the top young players to record
with me. They are fantastic, the best.
Recording it was great fun.

Answer:  The songs on the album are all ones the Kentucky Colonels
performed and put our stamp on. A few are ones that are pretty much exclusively
the Colonels‘ repertoire, but several that are in the general bluegrass
repertoire that we loved to do.

Answer:  The last CD was a Roland White Band album CD called
Straight-Ahead Bluegrass. This new one
is a special gathering of many of the most talented young players in bluegrass
today, playing their takes on the songs of the Kentucky Colonels.

Answer:  It’s a Leroy Mack/Buck Graves (Josh Graves) original that was a
signature Kentucky Colonels song, “If You’re Ever Gonna Love Me.“ This rendition
is so lively, and Darin and Brooke Aldridge are such superb singers. I was
really excited to sing with them.

Answer:  They have not told me it cured cancer, but it’s been very
gratifying to hear people say they love the music and it has enriched their
lives in various ways, including inspiring them to play, or inspiring their
children to play.

Answer: First, my dad, who played the
fiddle and guitar and sang sad, pitiful songs! And all the popular music of the time I was growing up. For bluegrass, it’s Flatt & Scruggs, Bill
Monroe, The Stanley Brothers, The Osborne Brothers  …and the other
pioneers. And Joe and Rose Lee Maphis,
Rose Maddox, Merle Travis and all the other the exciting country and blues and
folk performers we saw as teenagers in southern California in the 50’s. My dad played and my mother danced; all my
dad’s brothers and sisters played or sang. It was a very musical family. I
began trying to play a little by age 5. It went on from there!

Lamitschka:  As an artist, you so have many tasks
such as recording, touring, interviews. What do you like best, what’s your
favorite activity?

Answer: I like playing with others the best–playing shows and jamming. I used to enjoy the travel and seeing new
places but I don’t do much of that now.

Lamitschka:  What was your big break that got you
into the music business?

Answer:  Winning a talent contest in Burbank, California in 1954 when I
was about 16, brother Eric 13, and Clarence was 10. It got us a regular spot on
a Squeakin Deacon’s Riverside Rancho musical variety show, and spots on a local
tv show. From that entrance we got to be part of the burgeoning Southern
California country music scene of the 50’s. Those performers were amazing to
see, and they were a great inspiration, and great mentors. They were very kind
and helpful to us youngsters.

Answer:  When I was about 5 years old my mother and I were listening to
the radio and Shirley Temple was singing. I was aware that she was a child performer, and I told my mother I
wanted to do that (what she was doing, singing on the radio). My mother said
that if I practiced hard, I could!

(And Shirley Temple’s birthday was the same day as mine, 10 years earlier!) That
opened the door in my mind that this was something I could do. I didn’t even
play an instrument yet, but my sister JoAnne and I would sing around the house,
songs we learned from radio or records. Mother had many popular hits of the day on record. Soon I began trying
to play the fiddle but the bow was too long for me. Then I tried the guitar and had more luck. When I was 8 my dad got me a mandolin and I
really got going then.

Answer:  Getting to play in the bands of my mentors, first Bill Monroe and
then Lester Flatt, those events were the fulfillment of my dreams. Getting to
play so many venues for so many people all over the world. Getting to accept Grammy Awards as a member
of the Nashville Bluegrass Band. Playing at Carnegie Hall with NBB. Getting a
Grammy nomination for one of my own albums. Getting to teach young people and
see that they are really becoming fine musicians, getting to know all the good
people that are drawn to the music!

Lamitschka:  Who is your biggest critic, yourself or
others?

Answer:  I like to watch baseball and brush Sophie, our cat. I also like
to give lessons at home.

Lamitschka:  What has been the biggest disappointment
in your life?

Answer:  We’ll be at the Frankfort, Illinois festival next July 13-14. We play at the bluegrass mecca of the world,
The Station Inn, once a month, so I hope they’ll come see us there! We meet many visitors there from all over the
world.

Answer:  Hmm. I’ve been about
everywhere—Canada, all over Europe, England, Ireland, Wales, Africa, South
America, the Middle East, Japan, Australia. And I’ve played in every state of the U.S. I’m pretty satisfied with where I’ve played!

Answer:  Yes, it’s at https://www.rolandwhite.com. There I have a lot of instructional videos
and tablatures for mandolin, and book/cd sets for sale, as well as our music
CDs for sale. We (Diane Bouska and I) have produced three instructional book/CD
sets—Roland White’s Approach to Bluegrass Mandolin, Roland White’s Mandolin
Christmas, and The Essential Clarence White Bluegrass Guitar Leads.

Answer:  We love our European fans. Come see us at the Station Inn! Write
and let me know you’re coming (see the website for contact info) and be sure to
introduce yourself when you come.  I want
to meet you.

Lamitschka:  You have a new love in your life? Can
you tell us something about it?

Answer:  Yes, a Motorola smartphone. I can’t put it down. It loves me and I love it.

Answer:  There are many. Here’s a little
story about Bill Monroe: When I was a
Blue Grass Boy, we went to New York City. Bill was on the bus and somebody went out for some breakfast and thought
to bring back a bagel for him. Bill took
a bite and threw it down, saying,“That doughnut is hard, it’s cold, and it’s
not a bit sweet!“