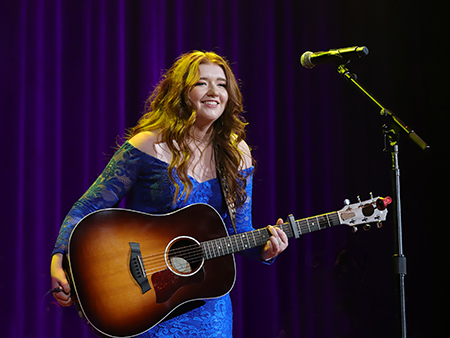 Since its inception in 2008, the benefit concert has had the support of
some of music’s greatest artists, including Ronnie Dunn, Kellie Pickler,
Dierks Bentley, Lady Antebellum, Peter Cetera, Peter Frampton, Ronnie
Milsap, Gunnar Nelson, and many other generous and talented musicians
who have donated their time and talent to support the efforts and causes
of Dustin’s foundation.

A portion of the proceeds from this year’s Gift of Music concert will go to Scott Hamilton CARES Foundation​.
Established as a national identity in 2014,this charitable organization
is dedicated to changing the future of cancer by funding advanced,
innovative research that treats the cancer while sparing the patient.
For more information, go to www.scottcares.org.

Because of his strong love for music, donating to the W.O. Smith Music
School is another way Dustin can be remembered, by sharing the “Gift of
Music” with underprivileged children in our community. With the
provision of free instruments and 50 cent lessons, these young lives can
continue to be changed, grown and enriched in memory of Dustin.

Taylon Hope is a singer, songwriter, musician from West
Jefferson, NC, located in the beautiful Blue Ridge Mountains and now
makes her home in Music City, Nashville, TN. Recently named of 20 to
Watch in 2020 by Women of Country and hailed as “Very promising” by
MusicRow music critic Robert K Oermann.
She began singing at the young age of four years old and music has been
her passion ever since. She loves singing and performing and making a
difference to others through her music. Her musical influences include
Dolly Parton, Vince Gill, Carrie Underwood, Martina McBride, among
others. Taylon has a love for both traditional and modern Country Music
and has a great appreciation for all kinds of music. Taylon Hope values
her roots and believes in being who you are and country is who she is!
She has had the opportunity to open shows for Shenandoah, T. Graham
Brown, Suzy Bogguss, Adam Crabb, and recently in Kansas she opened up
for Ned LeDoux, son of Chris LeDoux. She has performed at the legendary
Bluebird Cafe, The Listening Room, Schermerhorn Symphony Center, The
Texas Troubadour Theatre, The Nashville Palace, John A’s, and Puckett’s,
all in Nashville, TN. She has also performed at The Lyric Theatre in
Lexington, KY, MerleFest in Wilkesboro, NC and is a regular guest and
performer at WBTV Channel 3 in Charlotte, NC. Taylon Hope is a signed
artist for Dolly Parton’s DreamMore Resort and performs at her resort
throughout the year. In the Summer of 2017, she completed a Summer Tour
with Boot Barn and she continues to perform in their stores throughout
the South. Taylon Hope performed as an invited guest at the CRS Radio
Seminar and at CMA Fest last year in downtown Nashville, TN. Taylon
loves giving back through her music and is an on-going performer at the
Ronald McDonald house and is scheduled to begin working at St. Jude’s
hospital with the children’s unit. Taylon Hope has been a guest on three
occasions this past year on WSM Radio, the broadcast home of The Grand
Ole Opry. Taylon continues to do on-going writer’s nights in downtown
Nashville, TN. For more information visit her website: https://www.taylonhopemusic.com/