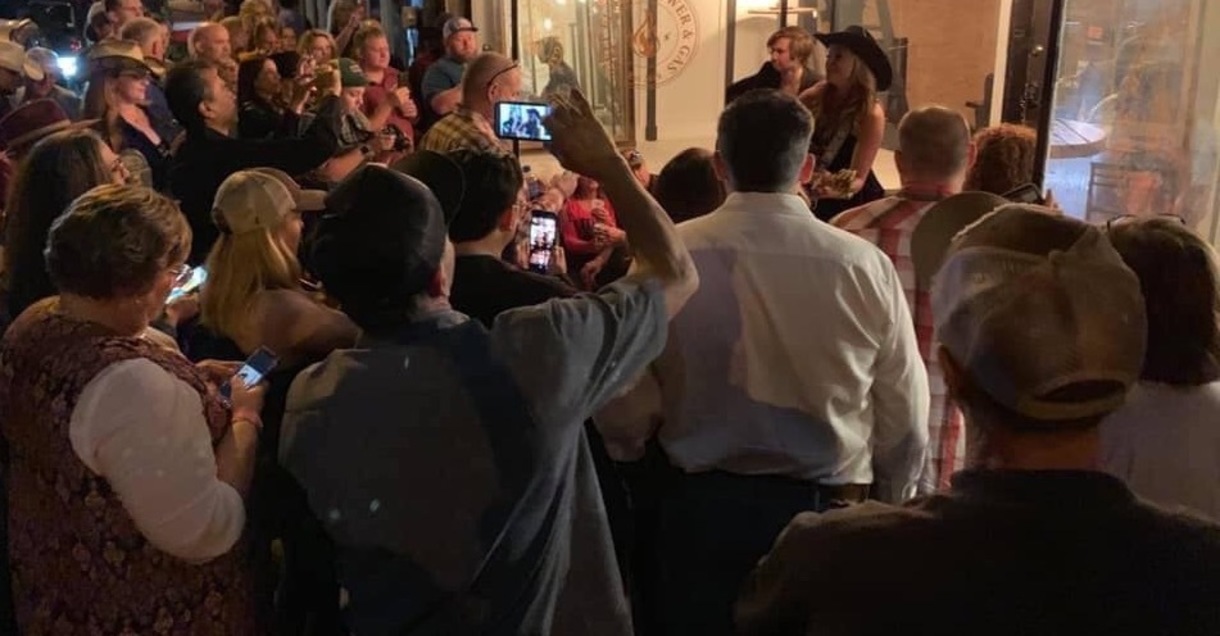 Viral
sensation and charismatic entertainer Karen Waldrup has experienced the
benefits of the power of positive music countless times over her career
and over the weekend in Dallas was no exception.  Waldrup was scheduled
to play at The Prophet Bar in the musically rich Deep Ellum
neighborhood of Dallas, but due to unforeseen issues between
the venue and the fire marshal, the show was abruptly cancelled.
Waldrup honored the VIP and elite VIP tickets on her tour bus and after
that, she went outside to find a line of hundreds of fans requesting
the show to go on.  Waldrup performed her 70-minute set on the street
outside the venue with no mic, no bathroom and no bar.

“I’m not too proud to play any stage. Whether I’m finally getting to
open for George Strait or walking out of the tour bus to play on the
concrete of a closed down bar,” expresses an emotional Waldrup.  “If
people come to hear me, I pick up my guitar and I play.  That’s what I
do- no matter what.”

Fans reaction from the Waldrup Worldwide Family poured in on social media.

“Thanks to Karen for making the best out of a bad situation last night,” says one fan.

Another added, “Karen Waldrup did an amazing job last night in
Dallas despite the short comings of the Prophet Bar facility issues. The
fans greatly appreciated the altered performance which was great and
did not disappoint.

“The night was magical and unforgettable,” exclaims Waldrup. “What a lesson in the power of music!” About Karen Waldrup

Waldrup has spent the last few years touring the world performing
thousands of shows everywhere from Long Beach, CA to Dublin, Ireland and
is now a true viral sensation with her social media videos gaining mass
appeal and more than 220 million views. Waldrup is the subject of
“Waldrup Wednesdays,” the hugely popular weekly video series on Country
Rebel’s Facebook page.

Waldrup is a 2018 / 2019 Weather Guard Nation Brand Ambassador as well
as a brand partner with BingeNetworks, Epiphone Guitars, FabFitFun, MAC
Makeup and many others.