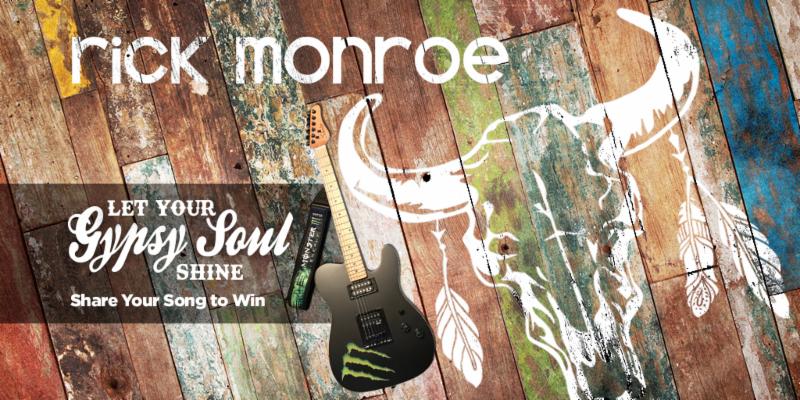 Nashville, TN (November 20, 2017) — Singer/songwriter Rick Monroe’s “Gypsy Soul” contest has wrapped, and the winners are as diverse as their versions of Monroe’s signature song.

Grand
prize winner Tommy Renfro of Hollansburg, Ohio is a Professor of
Education at Indiana University East in Richmond, IN.  The husband,
father and singer/songwriter is a sports fanatic and a dreamer, who
lives in Ohio and is the Worship Arts Director at Grace Baptist Church.  His endearing rendition of  “Gypsy Soul”
is highlighted by his heartfelt – and accomplished – performance.  “I
had no idea that there was such great, unrecognized talent out there,”
admits Rick.  “I’m gonna have to keep lookin’ behind me now.  Some of
these folks are really, really good.”  Renfro is the happy recipient of
the contest’s Grand Prize Monster Energy Schecter guitar.

Second place winner Ron Zeller of Rockford, Illinois takes home a pair of Westone Audio
UMPRO 30 in-ear monitors.  Monroe notes that Ron’s video submission is
from a live performance.  “It was cool,” Rick says.  “I think it was the
only live performance video submitted.  There he was on the stage,
singing about life on the road.  It was a flashback type thing for me –
and it just worked.”

Other
notable entries include an instrumental version (submitted by Sam
Persons and Fred Boekhorst of Rick’s band), a cool take by Brandon
Williams of Six Strings Crossings and one from Hilary Romaine and
Alexander Coxe (aka DuskDivine).  A complete list of winners and prizes can be seen HERE.

Rick toured heavily this year, entertaining fans with the sultry Billboard hit, “This Side of You,” and other songs from his GYPSY SOUL EP, which is available on iTunes.  He also revisited tunes from his previous project, IT’S A LOVE THING, including his previous Billboard hit “Great Minds Drink Alike.”  Monroe volunteered for several charity events, including house builds for the Murfreesboro, Tennessee chapter of Habitat For Humanity in July and November.

He also played in the annual Team Gamez  golf tournament supporting The Boys and Girls Club, performed at a fundraiser for Folds Of Honor during The Masters Golf Tournament in Augusta, Georgia, and participated in the Hike for the Homeless, benefitting Safe Haven Family Shelter, Middle Tennessee’s only shelter-to-housing program for families.