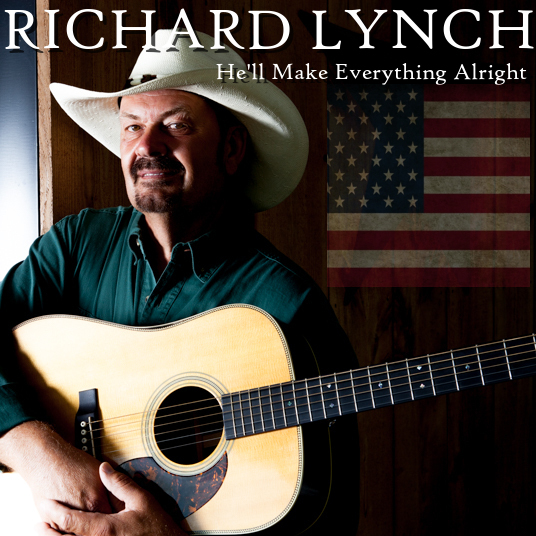 Richard Lynch Calls On Americans To Pray For Their Country

To Pray For Their Country

“This great country of ours, is in a heck of a shape
I know I’ve never seen it this way
But don’t let your heart be troubled
We’re gonna be alright
We got the right man workin for us
So pull out your Bible, blow off the dust
We need to pray to the Lord
He’ll make everything alright”

World events seem to inspire country music songwriters, more than any
other genre. From releases like George Strait’s “I Believe” (Sandy Hook
massacre) and Darryl Worley’s “Have You Forgotten” (9/11) to Toby
Keith’s “Courtesy of the Red, White and Blue” (Operation Enduring
Freedom) and Charlie Daniels’ “In America” (Iran Hostage Crisis),
country artists have a way of delivering a moving narrative that
mobilizes their listeners and makes them remember the events surrounding
the storyline.

The new single from chart-topping country singer-songwriter, Richard Lynch
is the latest patriotic anthem of hope and inspiration to join the
archives. Lynch’s self-penned “He’ll Make Everything Alright” was borne
out of the 2020 COVID-19 pandemic and the civil unrest growing in
America. But instead of being angry about these events, Lynch turns to
his faith in God, while inviting his fellow Americans to join him:

“I wrote this song about the current state of events in our country,”
says Lynch. “With the elections coming up, it just felt like the right
time to release it. I hope that listeners will get the message in the
lyrics…that no matter how bad things get…no matter how hopeless or
angry, or desperate you might feel…Find comfort and peace in your faith.
God is in control. Pray. He WILL make everything alright.”

“He’ll Make Everything Alright” made its radio debut Monday September
28th on Around The Bend with Brenda Lynn on WKRM radio in Columbia, TN.
Lynch will be joining Brenda Lynn in studio onon October 30th

ABOUT RICHARD LYNCH: Richard Lynch is a Waynesville, Ohio-based
country music artist, who has compiled a long list of country hits and
chart toppers in the world of traditional country music. His single, “A
Better Place” topped the New Music Weekly AM/FM country chart, the
IndieWorld Country Record Report, and spent an incredible 32 weeks atop
the Roots Music Report True Country chart. His next 4 singles also
topped the country airplay charts, including a duet with Grammy Award
Winner, Rhonda Vincent. Richard’s single, “Country Music Isn’t Country
Anymore” went Top 25 on the iTunes Canada sales chart. His single, “Pray
on the Radio” received Christian radio airplay and charting, also
reaching the US iTunes Single Sales chart. Lynch has appeared on WSM
Radio Nashville, RFD TV, Fox TV, and countless other media outlets.
Richard is a member of the Ohio Country Music Hall of Fame, The
Independent Country Music Hall of Fame, and he is a Billboard Magazine
Emerging Artist. He is also the host of “Traditionally Lynch,” airing on
TV and radio, and he’s the founder of the Love Tattoo Foundation for
veterans. http://www.richardlynchband.com