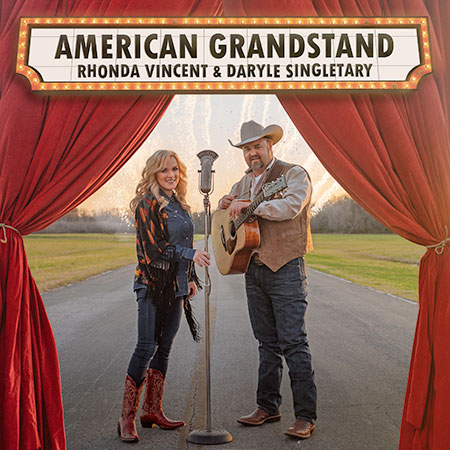 NASHVILLE, TENN. (May 26, 2017)
– Rhonda Vincent, who The Wall Street Journal dubbed “The New Queen of
Bluegrass,” is teaming up with country sensation Daryle Singletary for
the upcoming duets album, American Grandstand, set for release
July 7. The project delivers real traditional country music with a
unique American twist. This must-have album will be released via Upper
Management Music, and fans can pre-order American Grandstand HERE.

“I’ve always loved singing with Daryle Singletary. He’s one of the
greatest singers in this generation of country music,” said Vincent.
“It’s so fun to sing with someone who challenges me as a singer. The
songs were given great thought, along with one that was totally
unexpected. It’s one of the best projects I’ve ever been part of. I am
so proud of this recording, and I cannot wait for the world to hear our
wonderful creation, American Grandstand.”

The lead single, “One,” offers the very first taste of American Grandstand.
The slow love song takes fans on a musical journey. The track may sound
familiar, as it was previously made famous by country legends George
Jones and Tammy Wynette, whose demanding vocal duets helped propel both
acts to superstardom. Singletary and Vincent first performed “One”
together at the legendary Grand Ole Opry at the Ryman Auditorium in
April of 2016. Due to the overwhelming response, the dynamic pair chose
to add the track to American Grandstand.

Standout songs include the title track, which was written by Vincent.
When Vincent and Singletary were first trying to think of a title, American Grandstand
stood out, which by definition is “to behave or speak in a way that is
intended to impress people and to gain public approval.” This isn’t
Vincent’s first venture into country music, as her previous
Grammy-nominated studio album Only Me featured a combination of
six traditional country songs and six bluegrass tracks, featuring “We
Must Have Been Out of Our Minds,” which is also included on American Grandstand.

“Rhonda and I have been singing together since my first CD on Giant
Records in 1994. I’ve been a fan of Rhonda’s singing before that, but
since then for sure and it’s obvious as she has sung on most of my Indie
records as a background vocalist or a duet partner,” said Daryle
Singletary. “If you love traditional country music, and remember songs
originally sung by well-known duet partners like George Jones and Tammy
Wynette, Conway Twitty and Loretta Lynn, and Merle Haggard and Bonnie
Owens, this is a must-have CD that we are extremely excited about.”

Fans will have the chance to experience both Singletary and Vincent
together as they play select shows later this year (full schedule HERE).
Fans in the Nashville area will get multiple opportunities to
experience traditional music at its finest, as the pair will appear on
the hit show, “Music City Roots,” along with an appearance at CMA Music
Festival, plus a must-see album release party at The Nashville Palace.

American Grandstand Track Listing:
1. Above and Beyond
2. One
3. After The Fire Is Gone
4. American Grandstand
5. Slowly But Surely
6. As We Kiss Our World Goodbye
7. Can’t Live Life
8. Golden Ring
9. We Must Have Been Out of Our Minds
10. Louisiana Woman Mississippi Man
11. A Picture of Me Without You
12. Up This Hill and Down