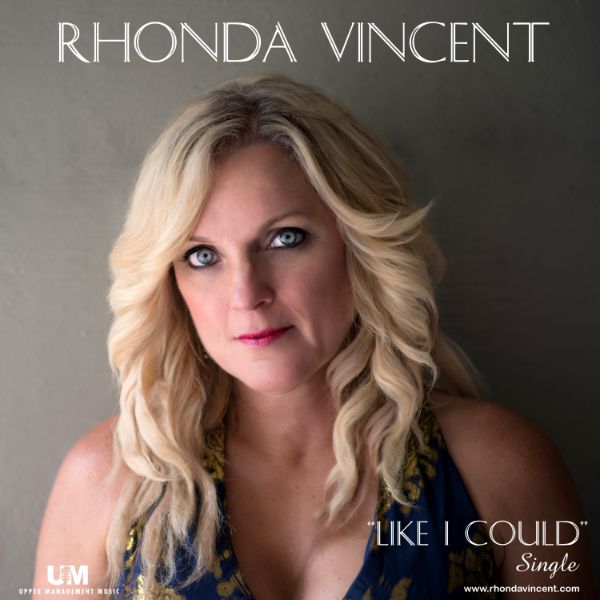 New song “Like I Could” Reaches #1 on Bluegrass Today Airplay Chart:

Vincent’s new song “Like I Could” recently reached #1 on the Bluegrass Today Airplay chart. The song was co-written by Grand Ole Opry star Jeannie Seely, along with Erin Enderlin and Bobby Tomberlin .

A concept video for the song premiered by RollingStone.com, features Vincent’s real life husband and manager Herb Sandker,
portraying the role of a wandering-eyed lover whose actions spurns the
dissolution of a once perfect relationship. The video was shot in
Nashville’s Music City Bar & Grill, and Directed by Jason Lee Denton and Steve Voss.

Rhonda and bandmates Hunter Berry and Josh Williams have been nominated for a total of four 2019 International Bluegrass Music Awards. Vincent received a pair of nominations for Female Vocalist Of The Year, along with a Collaborative Recording Of The Year nod for her duet with Dolly Parton on “Please,” a song originally written by Elton John & Bernie Taupin.

“Our life’s love and career are totally immersed in bluegrass music,”
said Vincent. “It’s what we do! We are so thrilled to be recognized by
the members of IBMA. Special thanks to Elton John & Bernie Taupin for allowing us to create a bluegrass version of “Please,” and to Dolly Parton for her amazing creativity and for joining us on the song.”

The winners will be announced during the IBMA’s World of Bluegrass gala awards presentation on September 26 at the Duke Energy Center for the Performing Arts in Raleigh, N.C.

Rhonda Vincent was born in Greentop, Missouri, where she grew up
performing in her family band, The Sally Mountain Show, featuring
country and bluegrass music. After releasing a handful of her own
successful bluegrass albums on Rebel Records as the 1990’s began, she
was signed to a country recording contract with Giant Records. Songs
such as “I’m Not Over You,” “An Old Memory (Found It’s Way Back Home
Again),” “I Do My Cryin’ At Night,” and “At The Corner Of Walk and Don’t
Walk” endeared her to fans of traditional country music, even if the
mainstream audience was not ready for her unashamedly country sound.
After developing a loyal following within both musical styles, she chose
to return to her bluegrass roots in 2000, and hasn’t looked back. Her
powerful voice and unrelenting work ethic have made her the undisputed
“Queen of Bluegrass” (a title bestowed upon her by The Wall Street
Journal), earning her a closet full of bluegrass music awards, and a
GRAMMY Award for Best Bluegrass Album in 2017. Her first-class
presentation both on and off stage has allowed Vincent to be one of the
only bluegrass artists of the 21st century whose albums consistently
reach the Billboard Country Top 40, finding a home among both camps of
fans. She is also one of Nashville’s most in-demand harmony singers,
heard on recordings alongside names such as Dolly Parton, Alan Jackson,
and Daryle Singletary. For more information and the latest tour
itinerary, visit rhondavincent.com.