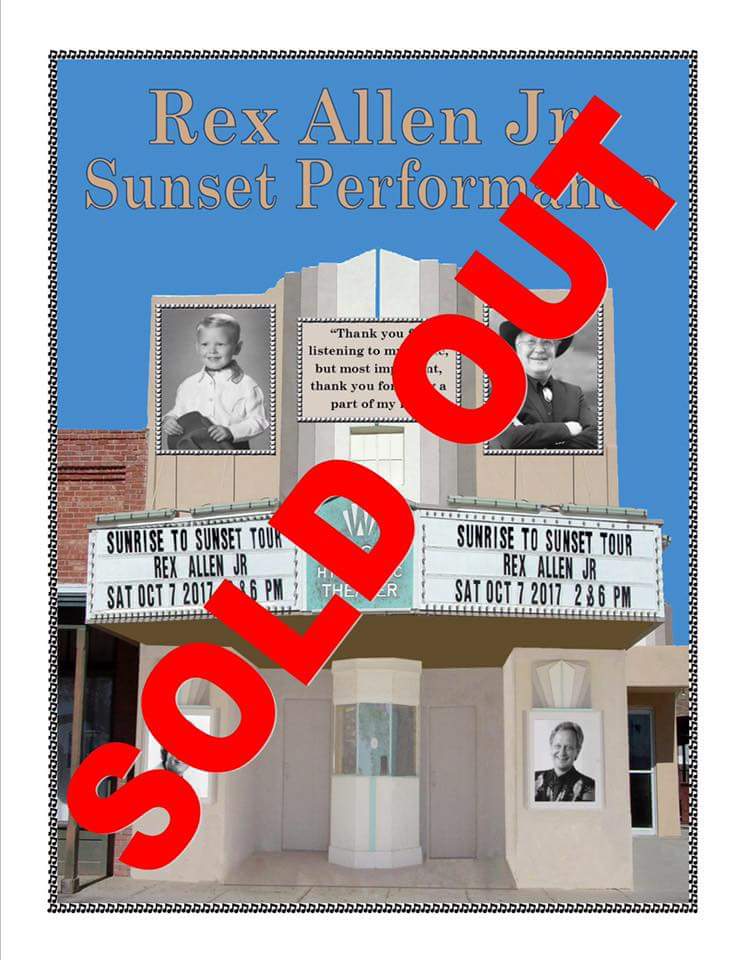 NASHVILLE, TN (September 5, 2017) —  In
one month, Rex Allen Jr. will walk the streets and step on the stage
where his career began in Willcox, Arizona for one final time. The
occasion, the annual celebration of his family’s legacy, Rex Allen Days.
And the fans are coming out in full support. After his final farewell
tour performance sold out, another show was added, which also sold out.
Currently there is a waiting list for fans to witness the musical
milestone.

Rex Allen Jr. recalls standing next
to his father as a child for his first public performance at the annual
Rex Allen Days gathering. “That was the beginning of over six decades of
entertaining. It is time to see the world from the other side of the
footlights. But I am so grateful to everyone who let me be a small part
of their lives.”

Rex Allen’s Farewell Sunrise
to Sunset Tour will conclude with his annual visit to lead a sing-along
of the state song of Arizona he wrote with grade school kids, a parade
and two sold out concerts at the Rex Allen Theatre on October 7, 2017 at
2pm and 6pm.

The event will be the end to a
legacy his father Rex Allen began as a western movie star and singer, as
well as a famous narrator for many Disney productions.

Allen
Jr. points out, “I am just retiring from touring, but I will still
record. I am not giving up music.” Rex Allen Jr. currently has the most
played western song, Call of the Canyon from his album, Garage Songs X:
This Is The Last Cowboy Song. He has also been in the recording studio
working on the next edition of his Garage Songs series of recordings.

Much
of the Sunrise to Sunset Tour has been captured for generations to
enjoy through an upcoming documentary. The production will also include
some behind-the-scenes footage of the Allen family memorabilia. Charlie
Daniels, Crystal Gayle, The Gatlin Brothers, Jimmy Fortune, David
Frizzell, Janie Fricke and Red Steagall are among the celebrities
sharing stories for this special documentary.

Allen
Jr. is currently nominated for Entertainer and Songwriter of the Year
with the Reunion of Professional Entertainers (R.O.P.E.).

About Rex Allen Jr.: The
Western Music Association Hall of Fame member has celebrated over 50
hits, hosted his own national television show (Yesteryear), written the
state song for Arizona (I Love You Arizona) and voiced national
commercials and a major motion picture (Me, Myself and Irene). . In
March 2017, Rex Allen Jr. was named the Western Music Male Vocalist of
the Year by the Academy of Western Artists.

About Rex Allen Days:The
66th Annual event will be held October 5th through the 8th in Willcox,
Arizona. The event benefits charitable organizations and scholarships.
Fans can enjoy a weekend filled with concerts, rodeo, a parade, a gun
show and a car show.