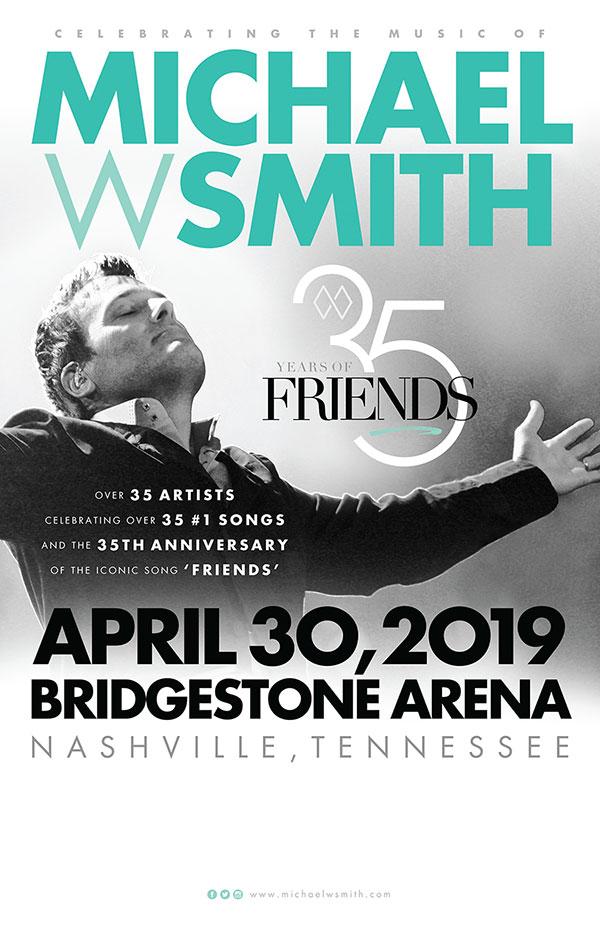 Promoted by Outback Concerts and produced by Tony Conway of Conway
Entertainment Group, music lovers will experience over 40 artists from
all genres, performing a set list to include many of Smith’s 35 #1 hit
singles. With over 45 Dove awards, three Grammy awards, and an American
Music award, Michael W. Smith has forever enshrined his mark in the
music history books. Smith garnered yet another Grammy nomination in
2018 for ‘Best Contemporary Christian Music Album’ for his latest
worship effort, ‘Surrounded.’

Tickets are available at all Ticketmaster locations and the Bridgestone Arena box office.

Michael W. Smith has been releasing new music regularly and performing
around the world to sold-out crowds for the last 30+ years. During his
storied career, he’s written over 30 #1 songs, been honored with three
GRAMMY® Awards and 45 Dove Awards, one American Music Award, was
inducted into the Gospel Music Hall of Fame and has sold more than 15
million albums. His most recent USA Today, Yahoo! Music and
Billboard-acclaimed studio album A Million Lights and Parade, Good
Morning America-featured and GRAMMY nominated live worship album
Surrounded have together become his 30th and 31st Top 10 hits on
Billboard’s Top Christian Albums chart, more than any other solo artist
in history. He’s also given back to the global community. Smith has
raised funds to battle AIDS in Africa; started Rocketown, a safe haven
for young people in Tennessee to meet and find hope; and has helped more
than 70,000 children through Compassion International. He has also
written several bestselling books, including Old Enough To Know and
Friends Are Friends Forever. For more information, visit www.michaelwsmith.com.

Outback Concerts is an independent, full-service concert and comedy
promoter based in Nashville, TN. In addition to producing hundreds of
concerts and events each year, ranging from clubs to arenas across the
country and Canada, Outback Concerts also produces the Nashville Comedy
Festival. Outback Concerts President Mike Smardak was a 2011 inductee of
the IEBA Hall of Fame. In November of 2016, Mike Smardak was honored
with a distinguished NATD Award alongside Nashville’s most recognized
members of the entertainment industry. In March of 2018, Smardak was
honored by the T.J. Martell Foundation with the Tony Martell Outstanding
Entertainment Achievement Award. Promoter Andrew Farwell was voted IEBA
Rookie of the Year in 2014.

Conway Entertainment Group is a full-service talent agency comprising
live events, booking and talent management. CEG is built firmly on the
foundation of Tony Conway’s forty years of experience in the industry,
climbing the ranks from agent to CEO of Buddy Lee Attractions, Inc., one
of the world’s largest agencies. In 2009, Conway sold his interest in
BLA and opened Conway Entertainment Group with the desire to use his
expertise from years of representing and negotiating some of the biggest
tours, sponsorships, licensing deals, and literary, film and TV
projects to come out of Music City.