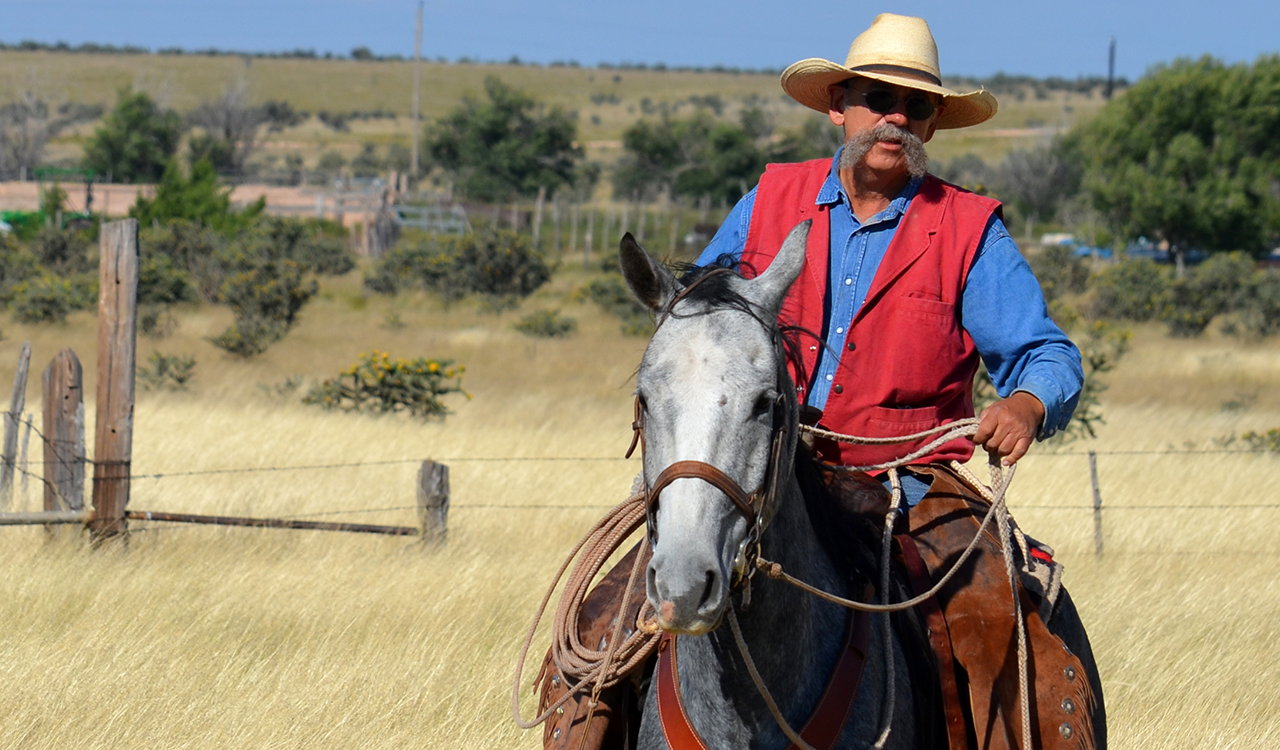 Randy Huston’s new album, Times Like These, is being welcomed by his legions of fans that love the music of both the Old West and what is now the New West – the life lived by the true cowboy.

“Way of the Cowboy,” the first single from the album could be an anthem for what might be called the cowboy lifestyle, but Huston isn’t too comfortable with that phrase.

“To me, the word ‘cowboy’ is really more of a verb than a noun,” he points out. “By that, I mean ‘cowboy’ is something that I do, that describes the job that I do.”

However, he understands the concept that the phrase conjures up. “To us that do it, it’s what we do, but to a lot of people looking from the outside it’s more of a code of ethics and it’s a way of living, a way of being,” he says. “That environment produces people with strong morals and strong family ties, a strong bond to our neighbors and a sort of ‘do onto others as you would have them do unto you’ attitude. I think a whole lot of the rest of what people see as a cowboy image is all made up. It’s a Hollywood or a dime novel thing.”

There’s nothing Hollywood or dime novel about Randy Huston. He’s a fourth-generation livestock producer who knows first-hand the challenges that this presents, but also the sense of peace that it can bring.

He says that he wrote “Way of the Cowboy” so that it wouldn’t be completely clear to the listener if it was taking place today or, say, in 1867, the heyday of the trail drives.

“I was one of the last people that had a chance to trail-drive cattle to railroad stock pens where we could load cattle,” he reveals. “That era has been gone for a long time. That’s how cattle were transported and that lasted clear up into the time when I was a kid. And I was thinking about it one day, about how I was awfully lucky to have been in on the end of that.” Those thoughts became the basis for the song.

“Cowboy Card,” another song from the album, pokes a little gentle fun at the people who put on airs and talk the talk but don’t walk the walk.  “They are trying to portray themselves as cowboys and convince other people that that they are part of the cowboy life when they really aren’t,” he says with a smile.  Among the witty lyrics:

I’m learnin’ all the lingo, took a course on cowboy talk

Put a rock in my boot so I would limp, now I can walk the walk

And when you’ve done all these little things, the county clerk will issue you your ‘cowboy card’! Huston’s wry humor in songs like “Cowboy Card” and Tumblebug Blues” (another track on the album) call to mind the cowboy poet and humorist Baxter Black whom Huston met when he was twelve years old and has remained an influence.

In a completely different vein, “The Hands That Held The Child” tells a poignant story from the point of view of a mother as she is handed the flag that draped the casket bearing her late son.

Huston explained the origin of the song.  “One of my friends, Duke Sundt, who’s also of the cowboy world, is a sculptor,” said Huston. “He was asked to do a monument for the American Gold Star mothers. He showed me what he called a sketch which was kind of a clay model of what the monument was going to be, and I asked what he was going to call it. He said the sculpture is going be called ‘The Hands That Held the Child,’ and I said, ‘Oh my gosh, that’s a wonderful song title. Let’s write that song.’  I ended up writing the song and Duke contributed the title. Without the title it would have been nothing.”

Huston has performed the song several times for Gold Star Mother and families who have lost a loved one in military service. “It’s very hard to do and even when I do it just in a concert setting,” he admits, “if I’m not careful and I look out in the audience it can completely stop me, because it’s not uncommon to see grown men sitting out the audience with tears running down their cheeks.”

Other standout tracks on the album: “Reflections,” initially motivated by looking into the kind and non-judgmental eyes of dogs and horses, and of course the title track, “Times Like These,” an inspiring song about dealing with the inevitable challenges and heartbreak that Life throws at us.

Huston says that he tries not to overdo the ‘cowboy lingo’ (that he mentions in “Cowboy Card”) but he knows he must remain authentic and not dumb it down for the listener. The words and music of this true cowboy are reaching new listeners worldwide.  The songs from Times Like These, used as background for videos, have been viewed over 4.2 million times on TikTok, and over 1.5 million views on Instagram.

Loretta Lynn – A legend passed away