Scott stepped into the entertainment field as he crawled up on
the back of a “Doc” M.F. Chamberlain’s Medicine Show wagon in Toccoa, Ga. in
1936. While he began playing at church socials, dances and on local radio as
early as 1933 with his sister Cleo, it was Chamberlain that gave him his first
opportunity to leave his parent’s farm in Eastanollee, Ga. and become a
traveling showman. 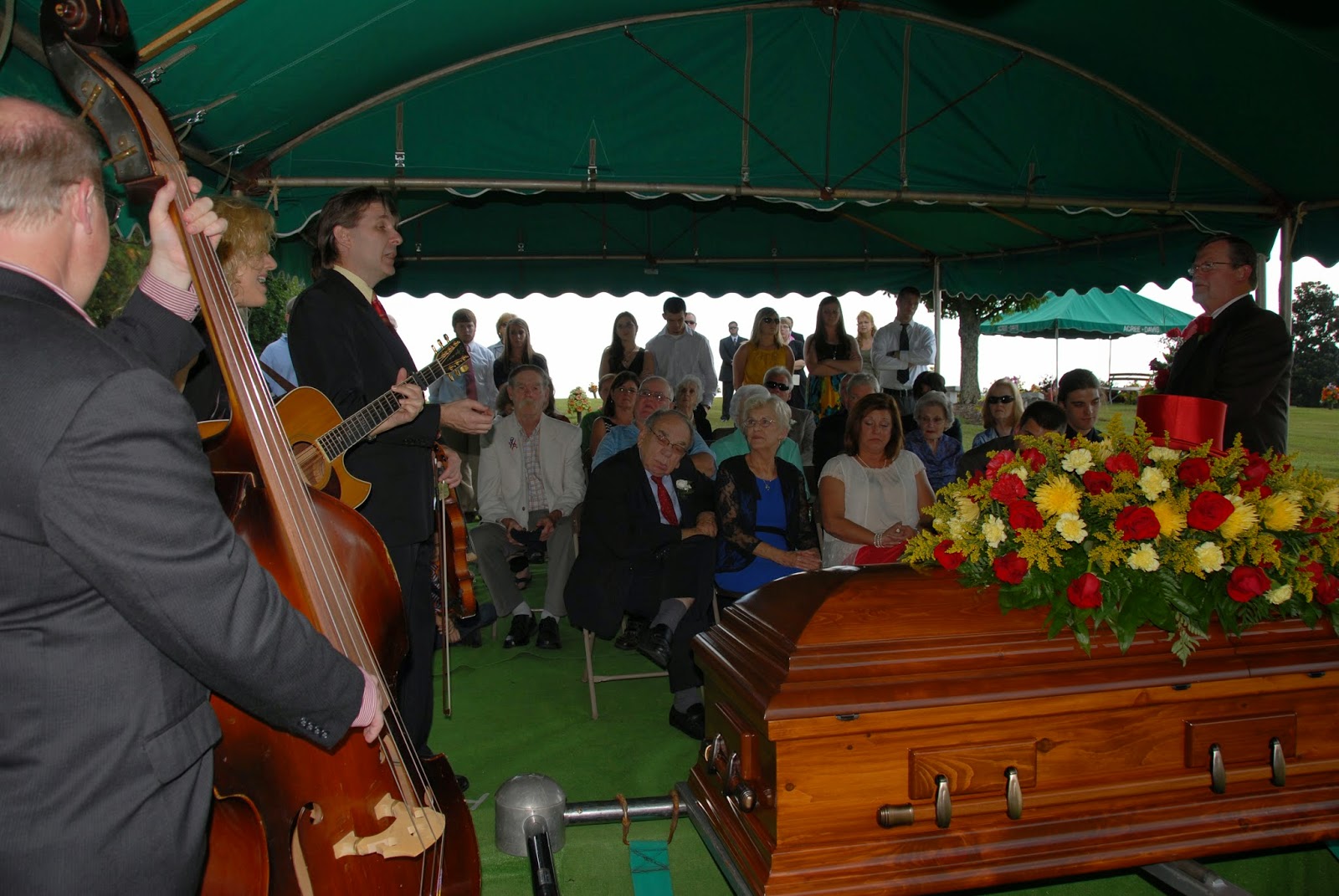 Chamberlain toured the South for roughly two more years retiring
from the show he began in 1890 and turning it over to Scott lock, stock and
medicine formulas including the laxative Herb-O-Lac, also called Man-O-Ree and
Katona and a liniment that Scott sold as Snake Oil. During the waning days of
the Great Depression, through innovative partnerships, Scott transformed the
company pitching it through radio moving up to 10,000 bottles of the medicine
weekly. He also served as a musical pitchman for Vim Herb.

Smithsonian Institute folklife historian Stephen Zeitlin stated
in 1981 that Scott “is indeed the sole active bearer of a once thriving and
vital American tradition.”

Scott moved to North Carolina in 1938 gaining a position on WPTF
radio in Raleigh, N.C. performing as part of the Pete and Minervy dramatic
troupe.

He then moved to WWVA, Wheeling, WV where he agreed to front
Charlie Monroe’s new band the Kentucky Partners appearing as Rambling Scotty.
Monroe had just split with his brother Bill Monroe, later known as the Father
of Bluegrass Music.

He married his late wife Mary Frank “Frankie” Thomas in 1940
shortly before he became a member of the Grand Ole Opry alongside
contemporaries Roy Acuff, Minnie Pearl and Ernest Tubb performing music on WSM
and doing comedy with his hand made wooden sidekick Luke McLuke on the Opry. He
led his Grand Ole Opry touring show both in auditoriums and under canvas with
Opry stars such as Uncle Dave Macon, Curley Williams, Danny Bailey, and Jimmy
Selph at his side.

Scott penned his most popular song of the late 1940’s “Rosebuds
and You” in honor of his longtime stage and film and TV co-star Frankie. The
song became a regional hit in the South and west for Ramblin’ Tommy Scott in
1950; it was later covered by dozens of artists including Country Music Hall of
Famer George Morgan, the Willis Brothers, and Red Sovine. The late fiddler
Benny Martin took his version of “Rosebuds” to Billboard’s top 20 in 1963.

Scott also wrote the bluegrass standard “You Are The Rainbow
of My Dreams,” and contributed to the multi-million selling pop song
“Mule Train,” to which he sold his rights. “You Took My
Sunshine,” “You Can’t Stop Time,” “Gonna Paint the Town Red,” “Tennessee,”
“Rockin’ and Rollin’,” “Elly Mae,” and “Pollution” were among the more than 500
songs he penned and recorded for a numerous record labels from Rich-R-Tone to
King, Four-Star to his own Katona label founded in the 1940s.

Scott became a fixture in early radio, theaters, circuses, and
western and hillbilly films appearing coast to coast. He starred in the 1949
release of “Trail of the Hawk,” directed by Oscar nominee Edward
Dymytrk, as well as numerous other 1940s and 50s films such as “Mountain
Capers,” “Hillbilly Harmony,” “Southern Hayride.”

When the “Ramblin’ Tommy Scott Show” produced in conjunction with
Sack Amusements came to nationwide television in 1948, Scott became the first
country music star with his own television series, the cast of the show
included Frankie, their daughter Sandra, Sally Ann Forrester, Ray Aldridge, and
Jimmy and Jenny Vance and featured singing, dancing and classic country comedy.

He returned to television in the 1950’s with Tommy Scott’s
“Smokey Mountain Jamboree” running in syndication around the country with
appearances by Grand Ole Opry stars Curley Williams and the John Daniel
Quartet. Scott’s TV show is the earliest historical film footage featuring a
Southern gospel quartet.

Among his other early television appearances was one with young
talk show host Johnny Carson and he later appeared with almost every major
journalist, talk or variety show personality in the U.S. and Canada including
Walter Conkrite, Oprah Winfrey, Margaret Trudeau. Charles Kuralt, Jane Pauley,
Ralph Emery and David Letterman. He made multiple appearances for Entertainment
Tonight, The Tommy Hunter Show and the Today Show.

Two documentaries for PBS
were created about his unique career, “Still Ramblin'” in 2001,
directed by Randall Franks, highlighting Scott’s early years in film and country
music, and an earlier one in 1980 focused on his performance career in the
1960s and 70s. Despite operating the medicine company throughout his career and
pitching medicine on stage, radio, and television, it was not until the 1970s,
that Scott put on the full mantle of the medicine show “Doc” that endeared him
to millions of fans around the world including the trademark colorful clothes,
red top hat and snake skinned shoes. Along with country contemporary Slim
Whitman, “Doc” Tommy Scott also became the focus of a Suffolk TV marketed album
of that era.

While innovating for the
comfort of his family and show performers on the road, Scott designed and
enhanced vehicles to provide their accommodations. A design originally sketched
on a brown paper towel backstage on a piano in the 1950s became the model for
what would become the prototype to the Dodge Motor Home. Scott joined forces
with a like-minded entrepreneur Ray Frank to fund and build a plant to create
the first motor homes through a music show and then sell them using his touring
road show as the showroom. Elvis Presley was among the first entertainers to
purchase one.

Scott was considered one of the originators of telephone show
promotions raising monies for clubs and organizations while operating a company
of 100 performers and show workers that produced shows and circus productions
in a different town every day from the 1940s through the 1990s visiting nearly
300 towns each year across the United States and Canada. Scott often boasted
that his show produced over 29,000 shows.

He completed his 700-page autobiography “Snake Oil,
Superstars, and Me” with co-authors Shirley Noe Swiesz and Randall Franks
in 2007.

In lieu of flowers, tax-deductible donations may be sent to Share America
Foundation, Inc., P.O. Box 42, Tunnel Hill, Ga. 30755 or made via credit card
at www.shareamericafoundation.org for a Ramblin’
“Doc” Tommy and Frankie Scott Appalachian Music Scholarship.

He is survived by his daughter Sandra Scott Whitworth and son-in-law
Charles Whitworth, his sister Cleo Scott Cheek, and nephew Benny Cheek, all of
Eastanollee, Ga., a granddaughter Pam Lawson, and two great grandchildren Craig
and Corey Lawson, all of Toccoa, Ga. and Irene Moore, personal assistant to
Tommy and Frankie Scott for over 60 years.

“Doc” Tommy Scott at an appearance at the Scopes Trial
Festival in 2007. (Photo by Butch Lanham)

Actor/entertainer
Randall Franks is joined by the Watkins Family to sing Tommy Scott’s
popular gospel song “Say a Little Prayer” beside a casket upon which
Scott’s unique red top hat rests. His daughter and film and television
co-star Sandra Scott Whitworth (fromt row, second from the left) and
other family members remember the multi-talented showman, loving father
and grandfather. (Photo by Regina Watkins)