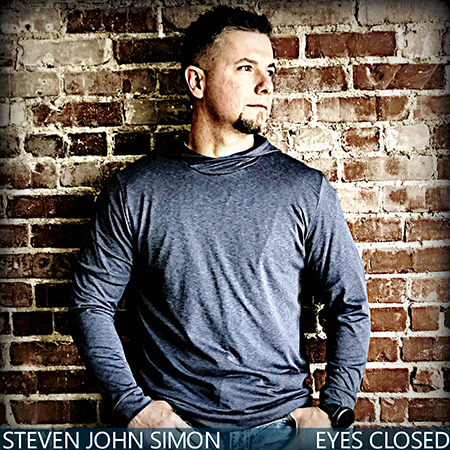 “I am so excited for my fans to hear this song.  It is their support of
my last single,”Tongue Tied,” that sent me into the studio to record
more music for them,” said Steven John Simon. “My goal is to make them
proud and keep giving them music for all of their love and support of my
music journey. The support of the fans helped me debut on iTunes Hot
Tracks”

“Songs like “Eyes Closed” don’t come around every day and neither does
an artist like Steven John Simon,” exclaimed Casey Carpenter.

Heart Songs Records and was swiftly signed to a management production
deal with the label. His social media growth is on fire.  Over the
course of a few months he has developed a fan base of country music fans
that are encouraging him to pursue his music. They want more! Steven
was born and raised in Louisiana.  He is a family man and loves being a
single father to his two children Navika & Cole. Steven works in the
oil field as did his father and most of the men in his family. He
ventured into the oil field after serving our country in the Marine
Corps. He was stationed at Camp Pendleton  (California) for two years
and then spent three years on security at the Embassy in Dakar, Senegal,
West Africa & Singapore. Steven is currently a Subsea Engineer
which includes the operation and maintenance of the Blowout Preventers
(BOP’s). Steven became interested in singing at the age of 20, but put
his dream on the back burner to serve our country.  It was his daughters
desire to start pursuing a career in music that led him to start
pursuing his own dream. He wanted to lead by example and guide Navika in
her own journey. “What a better way to help my daughter, than show her
how it is done.” They really are supportive of one another, they
recently traveled together to audition for The Voice. Steven said
recently in an interview,  “My main reason for pursuing it now is to
show my kids that anything is possible if you WORK for it! No one will
hand it to you, you have to make it happen.” Steven released his first
single, produced by Larry Beaird, “Tongue Tied” on 11.30.18 which made
its debut on Itunes Hot Tracks. Steven’s second single, “Eyes Closed,”
became available for pre-order on Feb 15 and will be released to all
digital platforms on March 15.