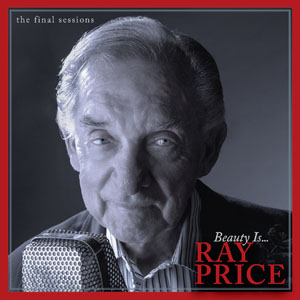 NASHVILLE,
TN (July 13, 2015) – The title of the new single from the late Ray
Price is quite symbolic. “It Always Will Be” is more than just a
testament to his talent, but also a tribute to the five-decade
friendship that he enjoyed with the song’s writer – Willie Nelson.

“It Always Will Be” is the latest single to be released from Price’s final album, Beauty Is… The Final Sessions, which
was released in April of 2014 – just four months after the Country
Music Hall of Famer’s passing in December 2013 at the age of 87.

Price gave Nelson one of his first jobs in Nashville – as a member of
his Cherokee Cowboys band. Nelson returned the favor by penning several
songs for his boss, including the timeless standard “Night Life.” In
1980, the two teamed up for an album entitled San Antonio Rose, which featured the radio hit “Faded Love.” Price and Nelson also worked together in 2003 on the album Run That By Me One More Time, as well as 2007’s Last Of The Breed, which also included Merle Haggard.

Both men had nothing but the highest amount of praise for Price, with
Nelson saying “Ray was the best singer, my best friend and he will be
missed. Also, his recording of ‘It Always Will Be’ says it all.” Haggard
echoed those sentiments, as well. “He was probably the first outlaw. I
think Willie [Nelson] will agree. He was out there fighting for what he
believed and doing it his way, and being criticized and all that. I
remember when he laid the guitar down and started hiring violin players
and all that, and everybody thought he was crazy. Crazy like a fox. He
knew what he was doing.”

Price’s widow, Janie, is excited to offer the fans one more single
featuring the one-of-a-kind vocal presence that was – and is – Ray
Price. “Ray and Willie shared a lifelong friendship. Gold records,
Grammy awards, and sold out concert tours are evidence of the magic they
created when performing together,” says Janie Price. “Onstage or off,
they were good friends to the very end.”