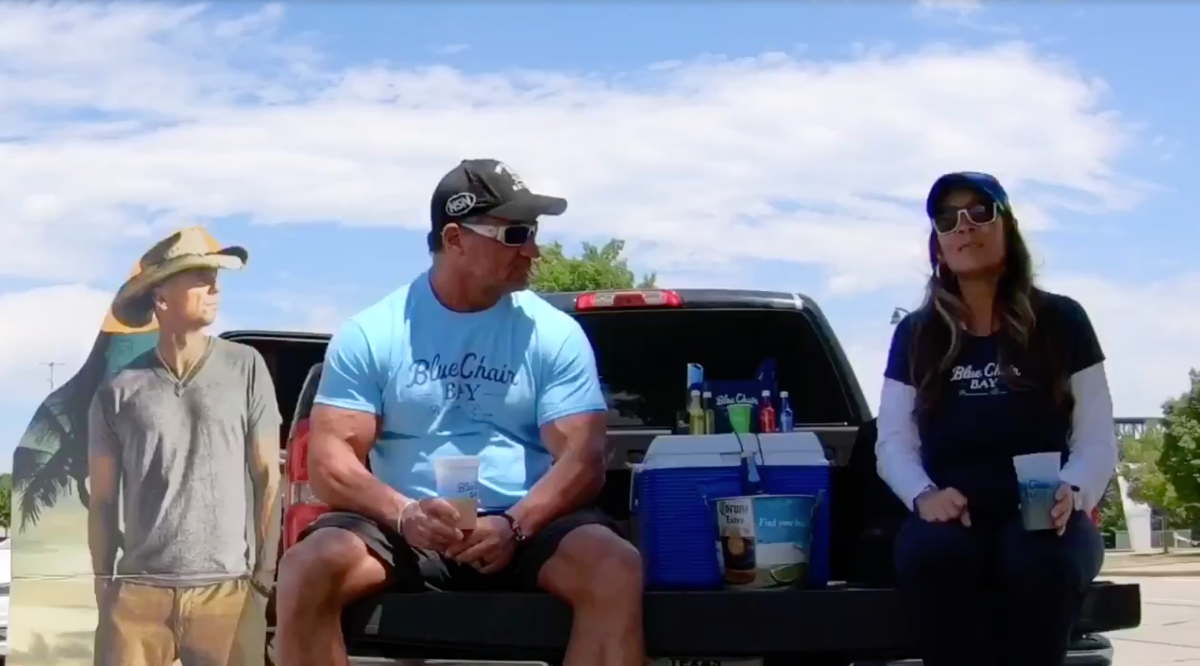 NO SHOES NATION TAKES IT VIRTUAL

Leave it to No Shoes Nation, the
millions-strong country without borders who have built a life-affirming,
free-floating community over the last decade. Understanding that the
first half of Kenny Chesney’s tour needed to be postponed due to the
ongoing home quarantining in the face of the COVID-19 pandemic, they
weren’t going to let the original kick-off of the Chillaxification 2020 Tour, presented by Blue Chair Bay Rum and fueled by Marathon, pass unnoticed.

With No Shoes Radio throwing an audible tailgate to mark the occasion,
fans in Dallas – and around the country – used April 18 as a way to mark
the euphoria that is traditionally the beginning of the summer-long
largely stadium tours that have become a rallying point for “fans of the
man from Tennessee.” In classic NSN fashion, it wasn’t long before
Twitter, Instagram and Facebook were filled with pictures, comments and a
few videos creating a cyber-tailgate.

And it all started with a hashtag #VirtualTailgateParty.

Anchored by a video from Randall Deavers, who actually went to Lot 12 to
capture what should’ve been his summer kick-off, the fans let their
voices be heard and their spirit show over the course of the afternoon
and evening. The homemade clip that featured Hazmat suits, proper
distancing protocol, the parking lot that’s normally filled with
thousands of happy tailgaters, two friends drill teaming a No Shoes
Nation and Blue Chair Bay Rum flag, it was the essence of making
lemonade out of lemons.

“I always talk about the heart and the passion of No Shoes Nation,” says the man the Los Angeles Times deemed “The People’s Superstar” when he saw the video, “and once again, they have thrown it at us in a way I don’t think anyone
on my team would’ve seen coming. To not be at Texas Stadium kicking off
this tour, I was not having the greatest day if I’m being honest. I
wanted to be out there, rocking hard and having a ball – not sitting in
my house like everybody else who’s doing their part to flatten the
curve.

“I hate letting people down, and I hate not getting that stadium-size
fix, but as I said when we postponed the first leg: I will not take
chances with the people I care about. Seeing the comments and the
pictures, watching that video from Lot 12 – those people especially –
rock my world in a whole other way! And this is exactly why we do what
we do!”

As “Here And Now,” a song about savoring the best there is in whatever
moment you find yourself inhabiting crests the Top 10, the
songwriter/superstar from East Tennessee is about to release one of his
most people empowering albums. With “Knowing You,” “Guys Named Captain”
and the title track drawing people in with songs about No Shoes Nation
lives, May 1 is more than just another day for the calendar.

With people engaging from Maine, Maui, St. Louis, Atlanta, Champaign,
Illinois and beyond, whether pitching a tiki hut in their house,
building a bar in the snow or just kicking back and blasting the music,
No Shoes Nation is ready to get after their summer – and squeeze every
drop out of the music, the man and the momentum of what these shows mean
to them.

“It’s crazy how if you wanna get creative and have fun, there’s always a
way,” Chesney marvels. “Even with us not being there, No Shoes Nation
brought it with all that soul and all that passion.”