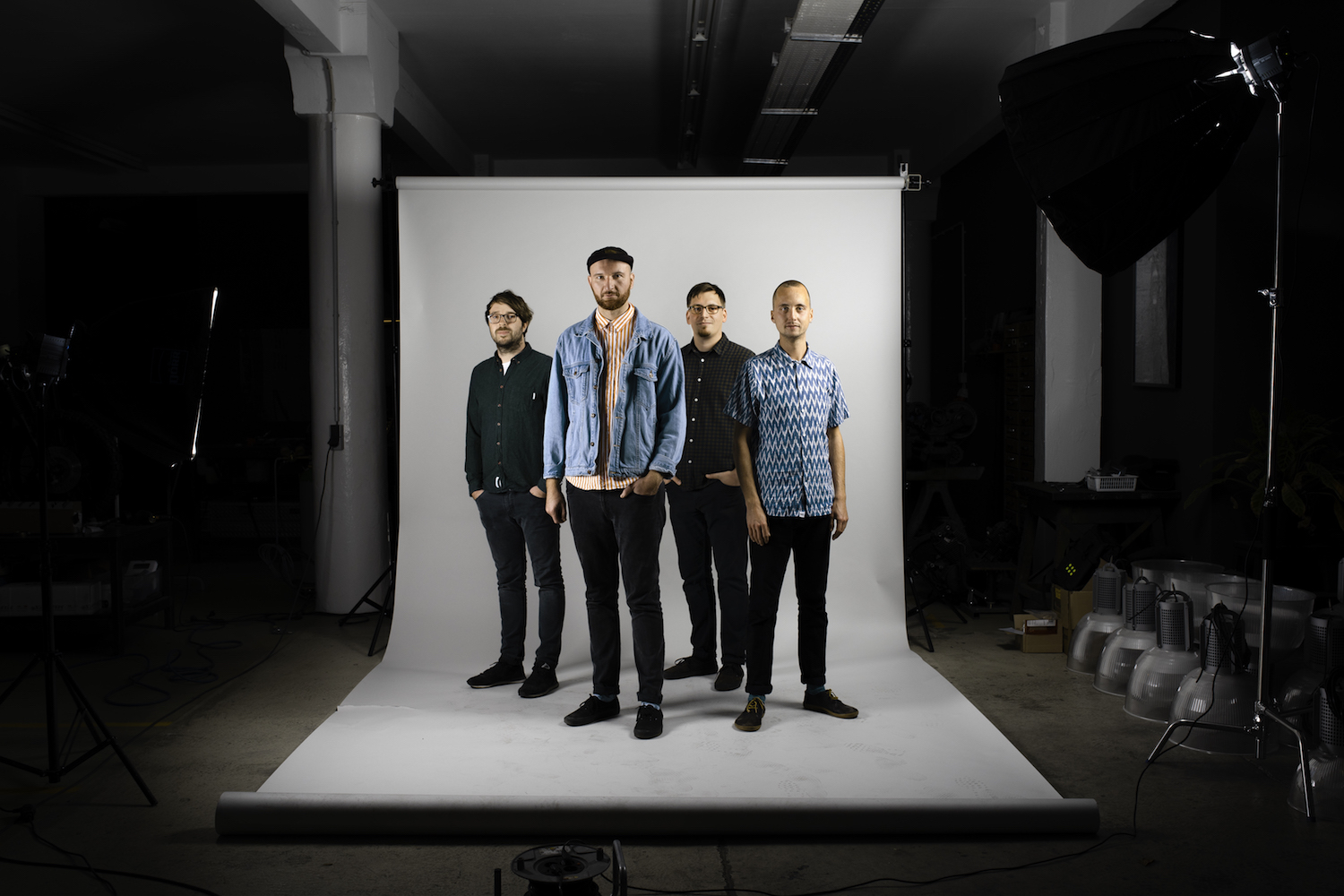 1.      Lamitschka:  Music has many new fans throughout Europe who may be
hearing about you for the first time. How would you describe yourself and the
music you play to someone who has never seen or heard you?

Hey, we
are No King. No Crown. – an indie-folk project of Dresden based musicians who
fell in love with writing folk-pop songs and playing shows across the country.

When I,
René (I play guitar and sing in No King. No Crown.) was traveling the world in
2010, I formed the band as a solo singer-songwriter and played many shows
across Germany and Europe by myself.

For the
upcoming record “Smoke Signals” we entered the studio as a full band – for the
first time – to create a new indie-folk sound which got their roots in acoustic
singer songwriter music and influences from Hip-Hop and Ambient. So, we combine
electronic beats with classical banjo and acoustic guitar sounds and also create
atmospheric soundscapes with e-guitar, violin and synthesizer.

2.      Lamitschka:  How was the last year for you? What were your
highlights?

This year
was kind of special to us, because we didn’t play much shows for the first
time. We spent a lot of time writing, practicing and recording the new songs.
It took us about 1 month to finish all the demoing and prerecording of the
upcoming record and about 3 months to record all the eleven songs in the
studio. We were experimenting a lot and tried various instruments, we found in
the recording rooms, we had never used before. Great time. But different to the
last two years where we have been on the road. So, the highlight was definitely
to produce a new full-length album which will be released in February
2019.

We
are about to release out new record “Smoke Signals” in February 2019. So, the
latest record is “Without Yesterday” from mid 2016. It is a while ago but I am
very proud of this one. We made it to the German Top30 Singer-Songwriter Charts
on iTunes and Newcomer of the month at Ampya. Many Spotify playlists liked it
too, so we got more than 1.5 million plays. That is something we can be really
proud of but I actually can’t wait to release the new record in 2019. So much
hard work and so many cool songs. It’s going to be a good 2019 for us.

4.      Lamitschka:  What is the difference between your last CD and your
current one?

There is
a huge difference between the old one “Without Yesterday” and “Smoke Signals”
because it’s the first time we wrote a record as a band. A couple of years ago NO
KING. NO CROWN. was a solo Singer-Songwriter project of René. He wrote all the
songs by himself and invited friends to the studio to play on the finished
songs, e.g. songs got decorated by violin or banjo. But now, we sat together as
a four-piece band to create new sounds, song structures and put together all
the ideas we have got to write the best record we could possibly do. When the
formation of No King. No Crown. changed from a solo artist to a band many
different instruments entered the band as well as many influences from
different music genres. So, we started using more electronic instruments like a
drum machine or drum pad, synthesizer and electric guitars.

5.      Lamitschka:  Your current single is being played by radio. What do
you feel is special about this song that makes people want to hear it?

On the
one hand it is the first song we ever published that got beats and synthesizer
in it. It is the first step to show people No King. No Crown. is no longer just
a solo Singer-Songwriter – no, No King. No Crown. changed to a band. It begins
like one of the old song but got that “Wow-Effect” when Banjo, Beats, Synthies
and E-Guitar are coming in – we want to show people how the project has
developed over the last 2 years.

On the
other hand, René is speaking about something that stucks in our heads for a
while. The Song “Smoke Signals” is about leaving traces in nature, ruthlessly.
How humans are taking everything for granted and replacing woods with concrete,
stars with streetlights or clouds with smoke.

We also
think that “don’t you think we go too far” is very catchy and people will think
about that topic as much as we do. Fingers crossed.

We will
release our second Single of the new Album in January 2019. It will be a song
called “Gold & Silver” which is about losing faith in humanity. Wars are
raging, cities are burning, there is hate, rage and envy. Sometimes I don’t
even like to read the news anymore because they just “drown the optimist in
me”.

7.
Lamitschka:  What is your
favorite song among all the songs you have recorded and what’s the story behind
it?

There are
two songs on the record which are more different than songs we have recorded
before. The song “Start Searching” was meant to be an interlude but it turned
to a full song when we recorded all the instruments in the studio and put
everything together. The process was really exciting because we didn’t do any
demos of this song – so we had no clue how it will turn out. “Start Searching”
sums up perfectly the new No King. No Crown. sound – it is atmospheric, it got
beats and many effects bands like SOHN or Bon Iver would use to produce a song.
It shows how No King. No Crown. formed a new sound and evolved since the last
record. I guess this is a reason I love the song so much. It’s different.

It’s hard
to choose the favorite songs. There is something special in every track, but
the story behind “What’s the Point” is one of my favorites: We got the offer to
support Julian Baker for 3 Shows in 2018. I am a big fan of her music, so I
totally went crazy when I got the e-mail. What I didn’t know was, that the
booking agency gave more band options to Bakers management to choose her
favorite. Unfortunately, she always takes female support bands, so we were out
of the game quite quickly.

I was very disappointed and it took me weeks to get over it. I started
questioning myself why I play music. Why do I spend so much time, sweat and
blood for something that might not get to the next level? But the dark clouds
disappeared and I knew I could never live without music and No King.No
Crown.. It is a part of me. It will always be.

8.      As an artist, you so many tasks such as recording, touring, interviews.
What do you like best, what’s your favorite activity?

Oh, it is
definitely being on tour. I always loved playing shows and get the attention of
people for our music but it was kind of different when I formed No King. No
Crown. as a solo artist. Now we are a team, we are a four-piece band and it’s
so much more fun to be on the road with these guys than playing shows by myself.
It’s like vacation with your best friends where you do something that you love
the most. It’s perfect!

The worst
activity for me is recording because you don’t really know how it will end up
and how it will finally sounds like. Even when you record some demos before.
It’s always kind of uncertain.

And to be honest, I don’t like the recording lamp. The red light always puts so
much pressure on me whereby I play wrong notes very quickly. But it turned out
well this time.

I always
loved to sing when I was a kid, ran through my parents apartment with
headphones and watched music videos all day long on MTV. But when my dad asked
me if I’d like to have an electric guitar for Christmas I was thrilled to bits.
It was the time when I listened to bands like Papa Rouch, Linkin Park, Limp
Bizkit and alikes – so I dreamt of making music like they do, too. So, this was
the beginning. It didn’t take that long till I played in my first band. One of
my friends learned how to play drums, the other bought a bass guitar, so we
started writing our first own songs.

10.  Lamitschka:  When you’re on tour, do you have time to play tourist?

Oh yes.
We always try to see some parts of the city where we are playing a show but
unfortunately sometimes it’s just not enough time. You get to bed quite late
and also wake up later than other people normally do. Then we need to drive to
the next city what takes about three or four hours. But we still try to see as
much as we can of every town. It’s what I love the most about touring. Meeting
places and people we have never met before.

11.  Lamitschka:  Many music fans today get their information about
artists online. Do you have your own website and what will fans find there?

Yeah, we
do have. It’s www.nokingnocrown.de –
you actually find everything you need to know about No King. No Crown. Always
the latest music and videos, tour dates, photos and promo texts for event
manager or journalists as well as merchandise. For me, it’s very important to
keep the visitor as long as possible on the site and give him all the information
he needs on one website. So he doesn’t need to look up on several pages to get
the info’s he wants to know. Of course, you will find us also on other social
media platforms like Instagram, facebook, twitter, youtube and many many more.