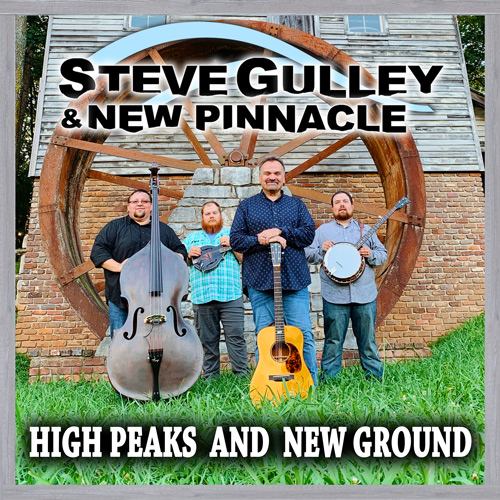 New Single From Steve Gulley And New Pinnacle, Follow-Up to Their #1 Hit Single

Rural Rhythm Records is pleased to announce the new single “Leaning Toward Leaving” from Steve Gulley And New Pinnacle.

“Leaning Toward Leaving” has that signature hard drivin’ sound that reminds us of other big Steve Gulley And New Pinnacle hits like “Leaving CrazyTown”, “Aim High”, “Drowned In Sorrow” and more.

”
‘Leaning Toward Leaving’ is a song I wrote with my good friend, Tim
Stafford. It tells the story of a guy who keeps threatening to leave a
relationship but just can’t seem to follow through on his promise to go.
His heart keeps overruling his mind in a constant emotional tug of war.
It’s a fun, up – tempo tune that helps to put a light – hearted spin on
how crazy love can be.”- Steve Gulley

Produced by Steve Gulley, HIGH PEAKS AND NEW GROUND is the group’s Fourth album on Rural Rhythm Records and features the up-tempo, hard drivin’ #1 single “Real Shine”.  Gulley co-wrote six of the songs including the first single “Real Shine”, which was co-written with his chief writing partner, Tim Stafford of Blue Highway.

HIGH PEAKS AND NEW GROUND contains 12 songs; six hit Bluegrass songs representing the HIGH PEAKS and six new songs, including the current hit, “Real Shine” representing the NEW GROUND elements on the album.  New Songs on the album include the new single “Leaning Toward Leaving”, “Moonshine Or The Coal Mine” written by Thomm Jutz and Jon Weisberger; “Just Because You Can” written by Daniel Salyer and Jeff McClellan; the gospel song “The Raging Storm” featuring lead vocals by band mate Bryan Turner and Gulley revisits his traditional country roots with his version of the Webb Pierce classic, “Even Tho”.

“Our
new album is a unique collection of music in the fact that it allows
us, as a band, to look back at some of the most successful songs we’ve
been able to create and record in the past few years while, at the same
time, looking forward and establishing a strong beginning to the future
of New Pinnacle with the fresh, new music we’ve included here…Six of our
most recognizable songs, six brand new tunes, ALL pure New Pinnacle.” –
Steve Gulley

HIGH PEAKS AND NEW GROUND is produced by Steve Gulley.