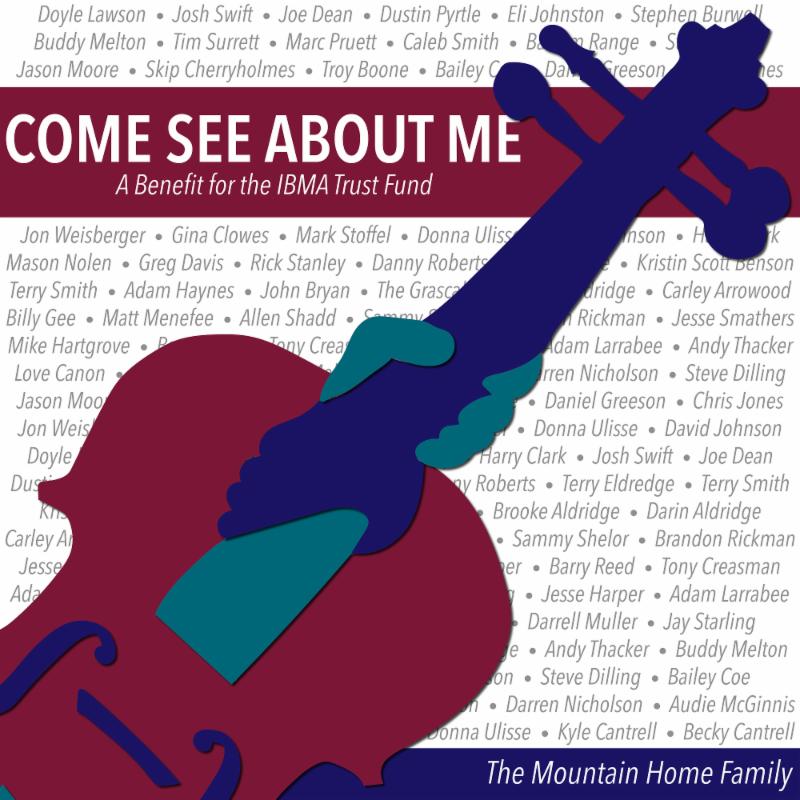 A family of artists from the Mountain Home Music Company have come together to record and release a special album that sends a message of hope and help. COME SEE ABOUT ME: A Benefit For The IBMA Trust Fund releases
Sept. 28th from the award-winning label. The 11-track concept offering,
created to generate income for and awareness of the Fund, features Doyle
Lawson & Quicksilver, Donna Ulisse, Darin & Brooke Aldridge,
The Grascals, Sideline, Lonesome River Band, Balsam Range, Chris Jones
& The Night Drivers, Love Canon and other special guests. The collection is available for pre-order now, and fans can catch a three-minute teaser in this YouTube video. Radio programmers can download the first single release, “Come See About Me,” from AirPlay Direct and fans can stream it HERE now. To make direct donations to the Fund, click HERE.

When Doyle Lawson had the idea to develop this project for the Trust Fund,Mickey
Gamble, Mountain Home president, didn’t hesitate to say yes. “The
effort and resources needed weren’t really a consideration,” Gamble
recalls. “We are a purpose-driven organization.”

For
Lawson, who served as an Executive Producer with Gamble, knowing the
end goal kept him focused on the project. While each artist produced
their own songs, Lawson says, “We are all in this together, but we all
bring something unique to the gathering and that’s important to
remember.”

Gamble
reflects, “So many folks came together in this effort to make it a
reality. They gave of their time and talent freely and without question.
These artists proved that the shared value of help is alive and well in our part of the world, and I will be forever grateful for that reminder.”

1  Sideline – Their Hands Made The Music (M. Brinkman)

Each
song was carefully selected to cement the central themes of hope, trust
and faith. Firmly grounded in Bluegrass, the album is enhanced with
Country, Gospel, Rock and Pop influences that provide for the
unexpected. The project kicks off with “Their Hands Made The Music,” an
apt scene-setter performed by Sideline. Donna Ulisse proves the power of
love in the lilting “A Little Trust,” while Doyle Lawson &
Quicksilver and vocalist Dustin Pyrtle remind us of “All The Good Things
We Could Do” if we lend a hand to friends in need. Lonesome River Band
(with guest vocalist Brooke Aldridge) slows things down with a
breathtaking version of Townes Van Zandt’s “If I Needed You,” which
leads to the up-tempo Balsam Range counterpoint-laden “We’re All In This
Together.” “You’ve Got A Friend In Me” is an impeccable cover of Randy
Newman’s classic ode to friendship performed by Love Canon, and Doyle
Lawson & Quicksilver return with a Gospel roots song, “We’ll Never
Walk Alone.” Darin & Brooke Aldridge shine on the vignette of broken
hearts and pain that is “Those Tears,” and Chris Jones & The Night
Drivers’ “Glimpse Of The Kingdom” carves out a positive message from a
song in a minor key. The Grascals, as ever irrepressible, triumph with
their interpretation of The Beatles’ “Help!” and the title track (and
current single), “Come See About Me,” closes the collection with an
inspired ensemble cry forthe weary, the frightened, the discouraged and the lost.

From
stellar vocal performances to applauded musicianship, the album offers a
master class in Bluegrass and the credits (which should be read
carefully) are a “Who’s Who” of the genre’s best.

The Mountain Home Family will be performing a set called “The TRUST” at the Red Hat Amphitheater Stage Friday, September 28 at 4 p.m. during the IBMA2018 World of Bluegrass in
Raleigh to celebrate the release of this album and support the cause of
the IBMA Trust Fund. Artists performing songs from the album include:
Doyle Lawson & Quicksilver, Balsam Range, Lonesome River Band, Chris
Jones & The Night Drivers, Donna Ulisse, Sideline and Love Canon.

The
Bluegrass Trust Fund (officially the “IBMA Trust”) was established in
1987 to offer financial aid to Bluegrass music professionals in time of
emergency need. Patterned after similar entities in the music world, the
Trust is a 501(c)(3) non-profit charitable institution governed by an
autonomous five-person board of trustees appointed by the International
Bluegrass Music Association.