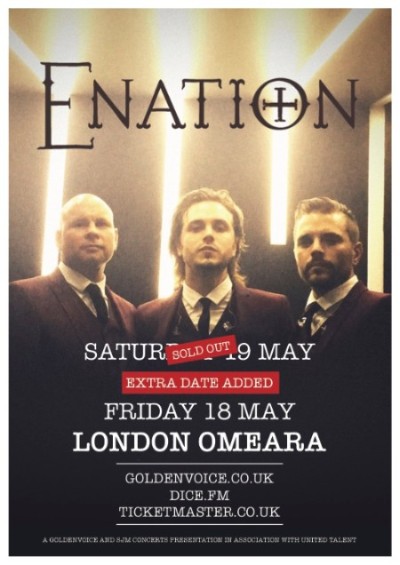 TO THEIR DEBUT UK VISIT DUE TO HIGH FAN DEMAND

GET A TASTE OF ENATION HERE

Nashville
rock trio ENATION make their eagerly anticipated debut UK appearance
next month, where they will be headlining London’s Omeara.

Following the announcement last week, the band can now reveal that they
have added a second date after tickets for the Saturday’s show sold out
in 24 hours.

The band will now also be playing Omeara on Friday 18th May with tickets on sale here.

Frontman Jonathan Jackson says, “We are thrilled to be adding a
second show in London! ENATION has been excited to play the UK for a
while and we’re really looking forward to connecting with our UK fans.”

ENATION is comprised of brothers Jonathan and Richard Jackson and
Jonathan Thatcher, formerly of UK band Delirious. They deliver a sound
inspired by alternative, post-punk and early new wave, with bands like
Echo & The Bunnymen, Talk Talk and Simple Minds at the core of their
influences, alongside the likes of Muse and Radiohead, who they covered
on their Top 10 Billboard charting DVD and album Live From Nashville in 2016.  With an ever-growing US profile, Billboard hails them as, “A rock band on the rise!”

ENATION’s 2017 full length album Anthems For The Apocalypse, was
a powerful delivery of the band’s songwriting and performance
capabilities, capturing an emotive and anthemic experience from start to
finish. It features the forthcoming single, ‘A Shock To The System’.

With a shared passion for music, art and life fueling the core of the
band, ENATION are a sonic force that will ignite rock fans from
Nashville to London and far beyond!