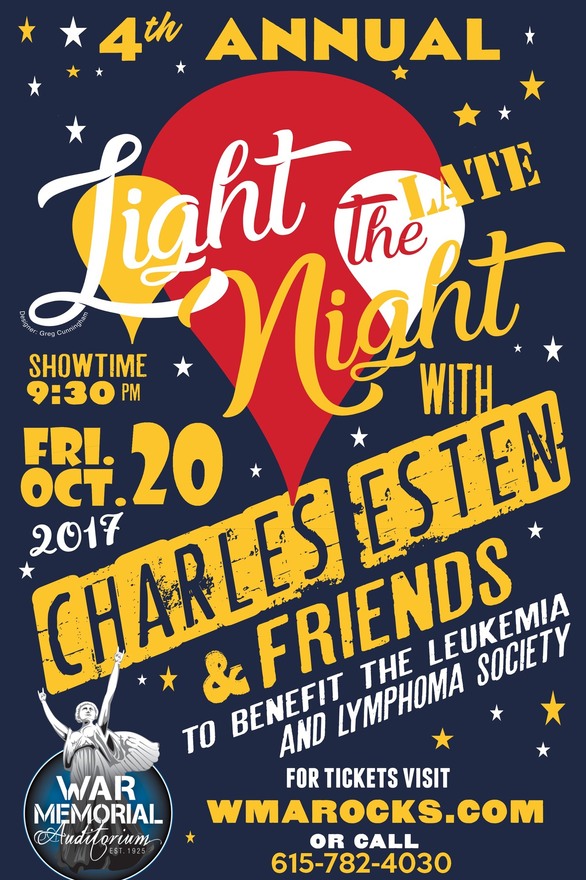 Highlight to be a Benefit Concert at Historic War Memorial Auditorium on Friday, October 20

NASHVILLE, Tenn. — October 5, 2017 — Charles “Chip” Esten, best
known as Deacon Claybourne on the hit show, NASHVILLE, will once again
dedicate a weekend this October to raising much-needed funds for The
Leukemia & Lymphoma Society (LLS). He will start the weekend on
Friday, October 20 at 5:30 p.m. by walking with his team and serving as
the Honorary Nashville Spokesman for the LLS’s Light the Night Evening
Walk and Fundraising Event at Nissan Stadium. Later that same night, he
will host his 4th Annual Light the LATE Night Benefit Concert at 9:30
p.m. at historic War Memorial Auditorium. On Sunday morning, October 22,
he will lead a guided bus tour of NASHVILLE landmarks for generous
donors and fans.

The Light The Night Walk is The LLS’s signature annual event to pay
tribute and bring hope to people battling cancer. Throughout the
nation, thousands of participants carry illuminated lanterns in support
of those who have survived, those battling and those who have lost their
fight with cancer, while raising funds for vital research and patient
services. This year is the 5th year that Esten will serve as spokesman
and lead Team Addie, named after Esten’s daughter, a leukemia survivor.

“As many, but not all of you, may know, when my daughter Addie was
two-and-a-half-years-old, she was diagnosed with leukemia,” said Esten.
“With the help of an amazing medical staff, backed by the research and
support of the Leukemia and Lymphoma Society, and held up by the prayers
of so many, Addie fought, and thank God, she won that battle. Today,
she is a strong, healthy, and beautiful 17-year-old student athlete
National Champion who will be playing Division 1 Soccer in college next
year. She is why I am honored to represent The Leukemia & Lymphoma
Society and help raise more funds for the life-saving research and
patient family services LLS provides.”

Thanks to the generous support of walkers and donors, Esten and
Team Addie have raised over $815,737 in the past four years to help The
LLS’s accelerate cures for leukemia, lymphoma, and myeloma. Those
wishing to join Team Addie or donate are encouraged to do at the Team
Addie page at bit.ly/TeamAddie2017.

Immediately after the Light the Night Walk on Friday, October 20,
Esten will again host his popular Light the LATE Night Benefit Concert,
this year taking place in the much larger War Memorial Auditorium after
selling out 3rd and Lindsley last year. The show starts at 9:30 p.m. and
all proceeds will support the LLS.

“For the last three years our Light the LATE Night Concert has
proven to be a perfect party-of-way to wrap up the night and raise even
more funds for this great cause,” said Esten. “This year’s concert looks
to be perhaps the best one yet. I will be joined by many of my friends
you already know (and hopefully a few surprise guests, as well) for what
has proven to be a fantastic night of music.”

Tickets for the show are available now at War Memorial’s web site or directly at bit.ly/LTLN2017.

Esten will wrap up his weekend of fundraising with the 3rd Annual
Charles Esten-Guided NASHVILLE Bus Tour, a behind-the-scenes tour of
famous locations from NASHVILLE that sold out and raised $15,000 for the
LLS in less than 3 hours.

“Last year, my generous passengers and I stopped by many of the
locations where your (and my) favorite Deacon scenes took place, and I
got to share a lot of behind-the-scenes information along the way,”
wrote Esten in a newsletter to fans. “We even got a surprise visit by
Will Lexington himself, my buddy Chris Carmack.”

Fans wishing to take this special tour in the future should check
charlesesten.com periodically as he promises this tour will not be the
last.

Born in Pittsburgh, Pennsylvania, Charles “Chip” Esten grew up in
Alexandria, Virginia and started his acting career in Los Angeles. He
made his theatrical debut in London, portraying Buddy Holly in the hit
West End musical “Buddy,” a role he honored performed for H.R.M Queen
Elizabeth and then President and Mrs. George H.W. Bush at The White
House. In addition to his role on NASHVILLE, he has appeared in many
films and television shows, including “Whose Line Is It Anyway?” and
“The Office.”

A singer and songwriter who began performing on stage when he was
in college, Esten in the summer of 2017 became the only artist ever to
release 54 consecutive songs via his #EverySingleFriday initiative. For
more information about Esten, please visit CharlesEsten.com or
MarushkaMedia.com.

About The Leukemia & Lymphoma Society (LLS)

The Leukemia & Lymphoma Society (LLS) is the world’s largest
voluntary health agency dedicated to blood cancer. The LLS mission: Cure
leukemia, lymphoma, Hodgkin’s disease and myeloma, and improve the
quality of life of patients and their families. LLS funds lifesaving
blood cancer research around the world and provides free information and
support services.